The deal could keep the centre-right and the resurgent far-right out of power, but still needs other parties’ support. 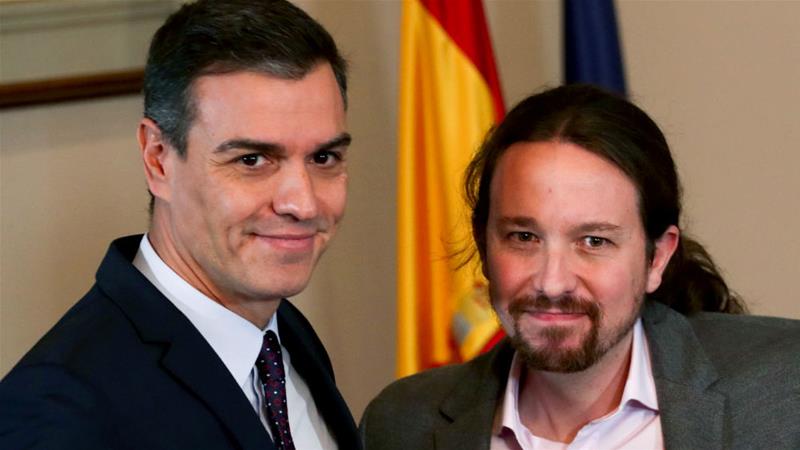 Spain’s Socialists and the far-left Unidas Podemos (“United We Can”) party have on Tuesday agreed to form a coalition government, just two days after a parliamentary election delivered a highly fragmented parliament.

The swift deal – albeit a preliminary agreement – still needs cabinet positions to be divided up between the two parties, who recently refused to work together, and also still needs the support of smaller parties.

Sunday’s election, the country’s fourth in four years, left Spain’s parliament with even less direction than a previous ballot in April, with the Spanish Socialist Workers’ Party (PSOE) retaining its lead, but drifting even further away from a majority.

The Socialists’ 120 seats, combined with the 35 won by Unidas Podemos, still leave them short of a majority in the 350-seat parliament.

“Spain needs a stable government, a solid government,” Sanchez said, adding they would call on other parties to join the deal.

If they succeed, it would be Spain’s first coalition government since the country’s return to democracy in the late 1970s.

Not the market’s choice

Nuria Alvarez, an analyst at Madrid-based brokerage Renta 4, said scepticism remains over whether the preliminary agreement would amount to a working government.

The market has always looked less favourably on a coalition between the Socialists and Podemos than a centre-right coalition, she added.

During its campaign, Podemos opposed the privatisation of state-controlled lender Bankia, whose shares were trading 4.3 percent lower.

The Socialists and Podemos had tried and failed to form a coalition government after the April election, prompting Sanchez to call the repeat ballot.

The two have been at odds for months, with party leaders exchanging harsh words as the acrimonious talks collapsed.

On Tuesday, they were all smiles, hugging after they signed the pact.

“We’ve reached a preliminary agreement to create a progressive coalition government in Spain, which combines the experience of PSOE with the courage of Unidas Podemos,” Iglesias said.

“A radical government is exactly the opposite of what Spain needs right now,” he said.

Centre-right party Citizens Party (Ciudadanos), which saw its support collapse to win just 10 seats, said it would not back the deal, calling instead for a grand coalition between itself, the Socialists and PP.

The small leftist Mas Pais (“More Country”) party won three seats, so the two bigger leftist parties would have to draw others in to boost their combined 155-seat tally.

They would need the Catalan left-wing separatist Republican Left of Catalonia (ERC) to at least agree to abstain, and all other non-separatist regional parties to vote in favour.

But ERC has said it was not ready, at this stage, to back the coalition government deal.

“Right now our position is no,” ERC spokeswoman Marta Vilalta told journalists, according to a translation from Catalan to Spanish by broadcaster TVE.

“If they want something from us they have to sit down and talk to solve a political conflict,” in reference to the Catalan separatist independence movement.

Local media, including news website eldiario.es, said that Iglesias would be deputy prime minister, something which Sanchez had rejected in the post-April election talks. Sanchez had also at the time opposed a coalition government. The two leaders said details would come later and did not comment further.