Priti Patel gives police an extra £1.1billion in funding to crackdown on burglaries and murders

Police funding will rise by up to £1.1billion next year, Priti Patel has announced.

The seven per cent cash increase would take the total police budget to £16.9billion in England and Wales, if police and crime commissioners add the maximum permitted amount to council tax.

The Government has given permission for up to £10 extra to be bolted on to annual council tax bills for an average Band D property. Forces are funded by a combination of direct grants from the Home Office and money raised through council tax. 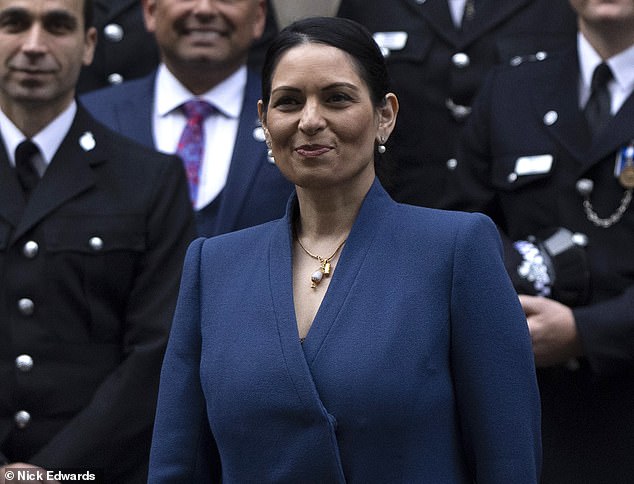 The seven per cent cash increase would take the total police budget to £16.9billion in England and Wales. Pictured: Priti Patel meeting officers to present a bravery award

‘This year we have seen some truly horrific cases of serious violence against women and girls.

‘I want to make sure that police have the resources to support victims of harassment and sexual assault, and the technology they need to zealously pursue the evil perpetrators of this violence.’

Miss Patel said: ‘Reducing crime is a top priority for this Government and I will continue working with police leaders to ensure this unprecedented investment results in less crime and fewer victims.’

Latest crime data shows the overall number of offences in the year to June was 12.7million, stable on the previous 12 months, according to the Crime Survey of England and Wales.

Some of the 2022-23 funding deal announced yesterday will go towards the Government’s pledge to hire 20,000 police officers by March 2023. More than 11,000 have already been hired.

It came as the Met Police announced it will speak to two attendees of the lockdown-busting party hosted at the Tory Party Headquarters last December.

The force, which has faced stinging criticism from some over a perceived lack of action regarding investigations into alleged gatherings at Downing Street, announced the news on Thursday evening.

It comes after pictures showed a rule-breaking event for Shaun Bailey’s mayoral campaign took place inside the party’s Westminster HQ on December 14, 2020.

Members of Downing Street staff joined the party, which included dancing into the early hours of the morning, despite London’s Covid rules barring indoor socialising at the time.

Mr Bailey bowed to pressure after a week of intense demands for him to quit, and four staff members have been disciplined over the ‘raucous’ gathering, in which a door was reported to have been damaged. 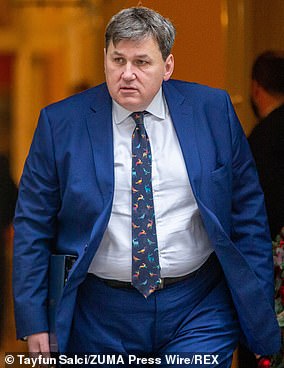 Two years ago, to kickstart the recruitment of 20,000 additional officers, we announced the biggest increase in police funding in a decade.

Having made huge strides to cut crime, this year we have listened to you, the public, once again, and I am hearing loud and clear that increasing police numbers and making our streets safer is a priority all year round.

Our police do extraordinary work to keep our neighbourhoods safe, but there is always more to do. From day one, the Prime Minister has been clear that cutting crime is one of his primary goals, and I wholeheartedly share his determination.

Yesterday, we showed that commitment by announcing an extra £1.1 billion to help police forces to do what they do best: fight crime and protect the public.

As a result, next year, the policing system will receive up to £16.9 billion to confront crime, protect vulnerable people and create safer, more peaceful neighbourhoods.

This year we have seen some truly horrific cases of serious violence against women and girls. I want to make sure that police have the resources to support victims of harassment and sexual assault, and the technology they need to zealously pursue the evil perpetrators of this violence.

The Home Office, with the support of the National Police Chiefs’ Council, has already launched a new online tool called StreetSafe, which allows the public, particularly women and girls, to pinpoint areas on a map where they feel unsafe and why. The information is used by police forces to better work with communities to improve local safety. 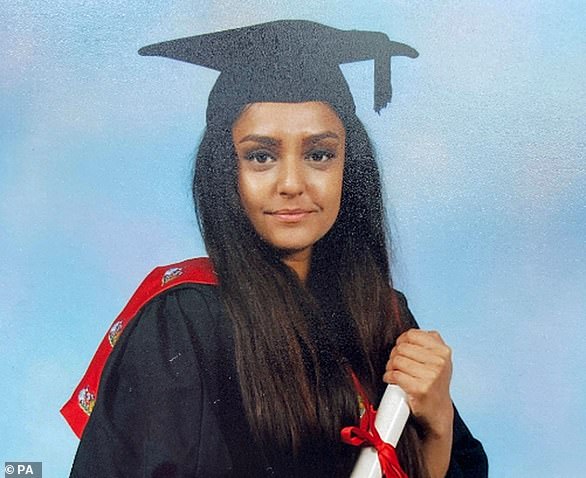 The government has also appointed the first ever National Police Lead for Violence Against Women and Girls, DCC Maggie Blyth, focused entirely on tackling this abhorrent issue and coordinating police action across England and Wales. This has already resulted action, with police pledging to improve their response to these abhorrent crimes and challenge sexism and misogyny within forces.

And the Safety of Women at Night Fund was launched earlier this year with up to £5 million made available for projects and initiatives, including such as drink spiking detection kits, a transport safety campaign and trained staff to support safe taxi journeys, to improve the safety of women in public spaces at night.

But we also need to address the threat caused by serious organised crime, which includes some of the most dangerous and damaging types of criminality in our society, such as cybercrime and child sexual exploitation.

Organised criminal gangs are one of the deadliest threats facing the UK today – blighting communities, ruining lives and costing the UK at least £37 billion each year. It is vital that we get a grip on this and show this country will not be a safe space for gangs to operate.

Just last month, an organised criminal gang who tried to smuggle 69 Albanian migrants into the UK on a dilapidated fishing vessel – and planned to bring in 50 more every week – were brought to justice. 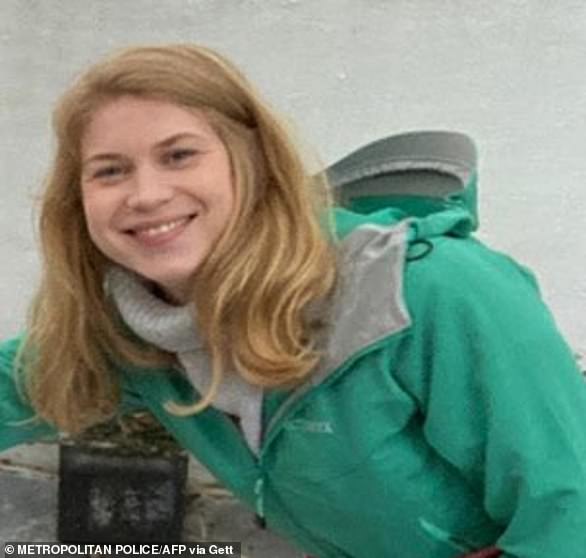 We have already made a huge impact here: since 2019, our county lines crackdown has seen over 1,500 lines closed, over 7,400 arrests, £4.3m seized and more than 4,000 vulnerable people safeguarded; almost 16,000 weapons have been taken off the streets in a drive to address serious violence; and our Safer Streets Fund has seen proven crime prevention measures, such as improved street lighting and CCTV put in place in areas blighted by robbery, burglary and vehicle theft.

And we’re going further and faster – as evidenced in our ten-year drug strategy published last week, which sets out the biggest ever increase in funding for treatment and recovery service, plus a commitment to dismantle 2,000 more county lines.

None of this would be possible without the sizeable increase in police numbers we know the PM would like to see – and I know that Mail Online readers, like so many people around the country, also want to see more officers on the beat!

We have made outstanding progress so far, with over 11,000 extra officers recruited in England and Wales, meaning we are over half-way towards meeting our target.

Every single new recruit is an asset to their force and another brave individual joining our mission to fight crime and protect people from harm.

But we must not stand still. Criminal threats are always evolving, so we must keep our eye on the ball.

We must always stand with the law-abiding majority, and against criminals who prey on the vulnerable, cause bloodshed on our streets and inflict misery on victims all over the country.

This is a mission that demands tenacity and focus. As the police funding settlement shows, there will be absolutely no let-up in our efforts to fight crime and keep the public safe.