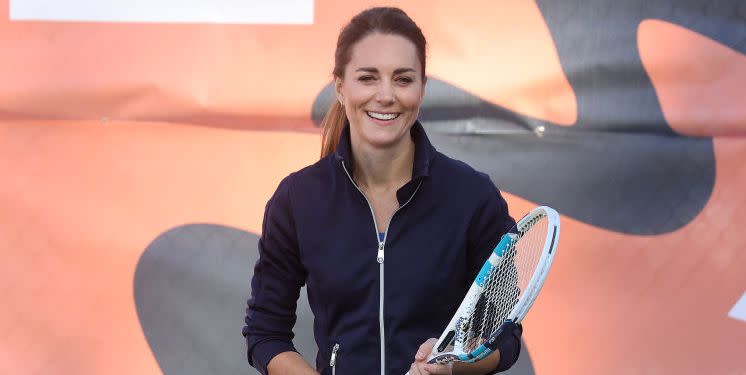 Princess Kate revealed a rare personal detail about her daily routine while at an event in England this week.

The Princess of Wales hosted a reception for the England Wheelchair Rugby League team yesterday at the historic Hampton Court Palace. The event was meant to celebrate the team's success at the Rugby League World Cup final last November. Kate chatted with team members and coaches, and even shared some anecdotes about her own relationship with sport and fitness.

One of the athletes asked the royal if she goes to the gym, to which Princess Kate replied, "It's running around after the children—I do it all, whenever I can squeeze in exercise I do, even jumping on the trampoline with my children before school," per the Daily Mirror.

Kate and her husband, Prince William, have long demonstrated their love for sport, and Kate said it's a hobby their three children—Prince George, 9, Princess Charlotte, 7, and Prince Louis, 4—share.

"We're always slightly competitive with each other. They all love sport and Louis is mad about rugby," she said. "They are at an age where they just love running around."

Kate became patron of the Rugby Football Union and Rugby Football League in February 2022, having been given the role—which once belonged to Prince Harry—by Queen Elizabeth II.

She and William are also often seen watching various other sporting activities, such as football, polo, and horse racing.

In a rare interview with the Happy Mum, Happy Baby podcast in 2020, Kate even said that her favorite times with her family are "outside in the countryside and we're all filthy dirty."