The operators of some of Melbourne’s most beloved live music venues say they are operating at a loss for shows after losing government support and while coronavirus restrictions continue to limit audiences.

The Andrews government announced on Friday that seated entertainment and sporting venues across Victoria can return to 100 per cent capacity, with a maximum of 1000 patrons per space. 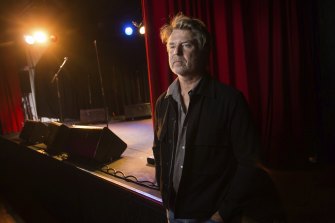 The Corner and Northcote Social Club part owner Tim Northeast says his band rooms are unable to work profitability due to the COVID-19 density requirements in Victoria.Credit:Paul Jeffers

But restrictions remain on non-seated areas, affecting standing audiences at gigs, nightclub dance floors and lobbies at seated venues, which all must have a coronavirus density quotient of one person for every two square metres.

Tim Northeast, part owner of the Corner Hotel and Northcote Social Club, said the two venues had capped audiences at about 40 per cent for live music.

“The band rooms are not sustainable or profitable,” Mr Northeast said. “The thing holding us back is this density ratio.”

He said it was frustrating for the industry that other forms of entertainment, including sport, seated theatre and comedy were able to have crowds of 75 per cent or more.

“It’s really hard for the music industry to see what the difference is,” Mr Northeast said.

“The industry just wants to be on the same competitive level.”

Jon Perring, co-owner of The Tote in Collingwood and Bar Open in Fitzroy, said the venues were now battling with higher costs after JobKeeper and protection for renters disappeared last month.

“You now have to pay back all that debt you accumulated during lockdown,” Mr Perring said.

“[But] we have kicked back to a higher cost base pre-COVID with half of the revenues.“ 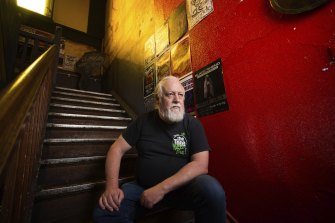 The Tote Hotel co-owner Jon Perring says small live music venues are on the ‘precipice of collapse’ due to the density ratios and the loss of JobKeeper.Credit:Paul Jeffers

He said the venues now had far fewer shows because he could not risk offering gigs that would not sell out.

“With all the small venues on the precipice of collapse, we are really looking at a terrible situation for Australian culture,” Mr Perring said.

A Department of Health spokeswoman said seated spaces presented less inherent risk than non-seated spaces but the Victorian government was working with industry to reduce risks.

“Directions are always under review based on public health risks,” she said.

The government has provided close to $25 million in dedicated support to Victorian venues, music businesses and artists during the pandemic.

Victoria has not recorded a locally acquired coronavirus case for more than 40 days, but a new case acquired overseas was reported on Saturday after hotel quarantine resumed on Thursday.