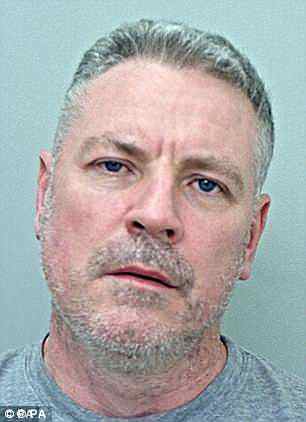 A thug who threatened people with a knife and guns should have been banned from keeping firearms before he went on to commit murder, his neighbours said.

Matthew Moseley, 50, was yesterday jailed for life with a minimum term of 26 years after being found guilty of blasting Lee Holt, 32, in the chest at point blank range, on October 25 last year.

Weapons enthusiast Moseley had tried to get away with the crime by pinning the blame on his 14-year-old son Thomas.

After pulling the trigger, he calmly handing the weapon to his son, Thomas, with the words: ‘Tell them you done it’.

He later put ’emotional pressure’ on the teenager to carry on with the lie and to claim he had opened fire in self-defence.

Moseley had twice handed guns over to police after threatening his neighbours, The Times reported today.

Residents in Oswaldtwistle, Lancs, last night said the killing should not have happened because police should have stepped in earlier to ban Moseley from keeping guns.

One of Moseley’s former neighbours said: ‘If the police had been tougher on him previously, he would have had his guns taken from him and Lee Holt would still be alive.

‘Matt is an absolute lunatic and made his neighbours’ live hell for years.

‘The police have been round to the house more than 15 times for various incidents.

‘He’s had the guns taken from him once for pointing (one) at his neighbour and threatening to shoot him but the police gave them back. He shouldn’t have had those guns. 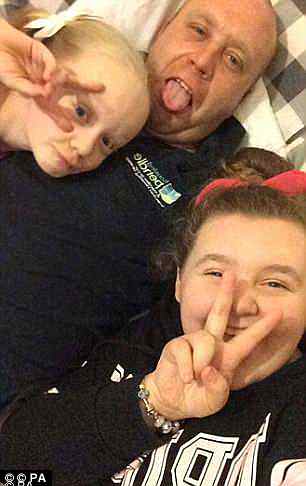 ‘He’s also smashed his neighbours’ car windows and smashed windows on their houses after falling out with them.

‘On another occasion, he held a knife to a neighbour’s throat just because he looked at him the wrong way.

‘The police were called but he was never charged with any offence.

‘But whatever he did, Moseley wasn’t ever charged with anything. It was like he was untouchable.’

Writing on Facebook, another neighbour Richard Slater said: ‘You had many, many chances over the years, Hyndburn police, to stop this happening.

‘But you still kept giving the guns back after incidents. You (were) told what would happen.’

Preston Crown Court heard Mr Holt, who had been drinking after a funeral, went with his partner to confront Moseley about claims of bullying on Facebook between the pair’s sons.

As Moseley opened the front door of his home he shot Mr Holt in the chest. 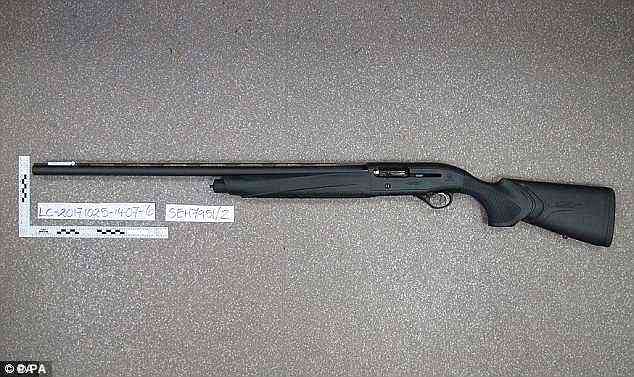 The court heard Thomas initially accepted that responsibility ‘out of loyalty and love for his father’.

But he eventually cracked after being quizzed as the prime suspect.

Son who father tried to frame has forgiven him

The son who murderer Matthew Moseley tried to frame has forgiven him, the court heard today.

Richard Littler, defending, said Moseley had been forgiven by both his wife, Julia, and his son Thomas.

‘Tom still loves his father to bits… It is hoped that in time they can rebuilt the father and son relationship.’ he told the court.

Giving evidence during the trial, Thomas said: ‘He’s my dad, I love him to bits,’ Thomas said. But then he added: ‘You’d think he’d take responsibility for his own actions. He didn’t. No normal kid has ever had to do something like this.’

The court heard that an ongoing dispute between Thomas and another teenager, Wesley Metcalf, 16, escalated following an exchange of texts on the day of the murder.

Wesley’s mother, Kate Phelan, 34, and her partner Mr Holt became involved – making threats and challenging Thomas and his father to a fight.

Miss Phelan, Mr Holt, Wesley Metcalf and a friend then took a taxi to the Moseley’s home.

Both Mr Holt and Miss Phelan, who had been drinking, hurled abuse and began banging on the lounge window and front door.

Moments later the door opened and Mr Holt was struck by a single bullet from Moseley’s 12 gauge Beretta shotgun.

Moseley maintained his innocence through his trial. He claimed in evidence that the shooting had been ‘a freak accident` – but that his son had been holding the gun. 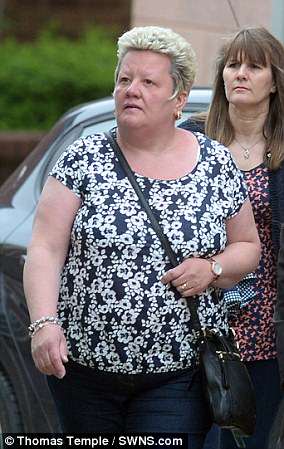 Lee Holt’s mother Marilyn (pictured, right) has urged the killer to admit he pulled the trigger.

‘Instead this opportunity was stolen from him, because of what? Because he knocked on somebody’s door too hard when he was trying to help out his partner’s son.’

She spoke of her confusion after first learning that a 14-year-old boy had been arrested over the shooting of her 32-year-old son, and then the boy’s father, Matthew Moseley, who owned the murder weapon.

Mrs Holt said: ‘I found out that the father had not just one gun, but 24.

‘Twenty-four guns. Why would anybody need that many guns in a residential estate in Accrington?

‘But I thought that the truth would come out – it was between the father and son – surely they’d both just tell the truth?

‘Instead I feel the last few months have just been each of them blaming each other. And I remember thinking, ‘Please, one of you killed my son, at least be honest as to who did it. Lee deserves at least that’.

‘As I sit here today providing this statement, nobody has admitted to pulling the trigger on the shot that killed him.

‘Nobody has apologised and said they are sorry and made a mistake. It makes me wonder, did they think Lee deserved to die at the time? Do they still think he did?’