Police errors ‘materially contributed’ to the deaths of young mother, 22, and her mother who were murdered by her estranged husband after she made FOUR 999 calls begging for help

A catalogue of police failures ‘materially contributed’ to the deaths of a young woman and her mother, who were both murdered by the daughter’s ‘obsessive and ‘controlling’ partner, and inquest has found.

Raneem Oudeh, 22, was murdered outside her mother Khowla Saleem’s home in Solihull, West Midlands, just after midnight on August 27, 2018.

The pair were violently stabbed to death by Janbaz Tarin as Ms Oudeh was on the phone to West Midlands Police.

Tarin, who admitted the killings, was jailed for life with a minimum of 32 years in December 2018.

But an inquest into Ms Oudeh and her mother’s death found errors by West Midlands Police officers had contributed to their deaths.

Speaking outside the coroners’ court in Birmingham, Nour Norris – Ms Oudeh’s aunt, said: ‘The failure of the West Midlands Police led to the loss of our beloved sister Khowla Saleem and her daughter Raneem Oudeh.

‘Both were murdered at the hand of an ex-husband of Raneem after a history of domestic abuse, coercive control and stalking – all of which police were aware of at the time.  West Midlands Police have failed Khowla and Raneem beyond imagination.

‘They had so many opportunities to save their lives right up until the end. Both were murdered while on the phone to the police begging for help.’ 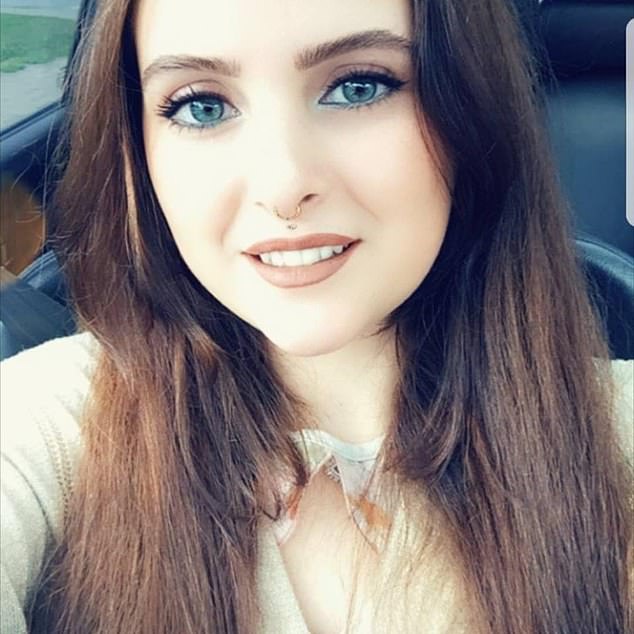 Ms Oudeh had made numerous reports to police against her estranged lover, which included threats to kill, violence and stalking.

The inquest heard how police had been called to Ms Oudeh’s address on seven separate occasions in the weeks leading up to the murders. And that Ms Oudeh had frantically phone 999 four times on the night she died.

A terrified Ms Oudeh had applied for a non-molestation order before she was killed.

Tarin had been married to Ms Oudeh under Islamic law but their relationship broke down after his lies about his secret family in the Middle East emerged.

Ms Oudeh had been living with Tarin and her two-year-old son from a previous relationship.

Following the break-up, Tarin continued to threaten and harass her, sleeping outside Mrs Saleem’s house on 12 consecutive nights, the inquest heard.

On the evening of their deaths the mother and daughter were on a night out at a local shisha bar when Tarin turned up.

As the row escalates, Tarin is caught on camera hurling abuse at the pair and had previously threatened her: ‘If you leave me, I will kill you and your family.’

He left the shisha bar armed with a knife and tragically, just a few hours later, Ms Oudeh was on the phone to police when he stabbed her.

Mrs Saleem, 49, attempted to save her daughter from the onslaught, but she too was fatally knifed by Tarin – who fled the scene before officers arrived.

Police then launched a manhunt and offered a £5,000 reward to anyone who could help find the killer – and he was cornered by police in the Sparkhill area of Birmingham three days later. 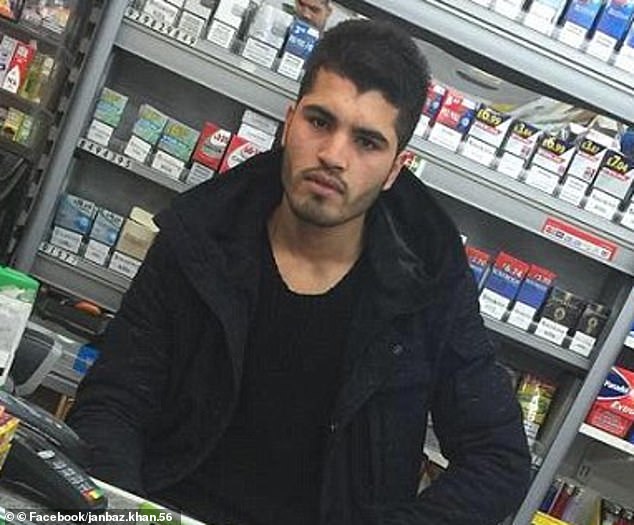 An inquest heard Ms Oudeh feared reporting abuse by Tarin (pictured), because she was worried social services would remove her child

At inquests into the two women’s deaths resumed at Birmingham and Solihull Coroner’s Court, an 11-member jury heard evidence about Ms Oudeh and Tarin’s relationship from her aunt, Nour Norris.

Senior coroner Louise Hunt also told jurors they would hear evidence of West Midlands Police’s response to several phonecalls made by Ms Oudeh to the force about her abusive partner before her death.

In her evidence, Ms Norris told how Raneem had fled the war in Syria to join her mother and family already living in the UK in 2014.

She said that after arriving, her ‘ambitious’ niece enrolled at Solihull College.

It was in her English study group she first met classmate Tarin.

Ms Norris described how Tarin ‘would buy her gifts, do things for her’.

‘At the beginning, she thought it was just a friendship, then that led to stalking her, hassling her,’ she said.

‘She had to report him to the college to leave her alone. He was suspended (from the college).’

Later, through her family, Ms Norris told how Ms Oudeh ‘met a guy’ who she then went on to marry, getting pregnant with her child.

However, that relationship failed before the birth and she ended up having the baby ‘by herself’.

After her niece moved to a flat in Kingshurst Road, Solihull, Tarin ‘slowly, gradually’ convinced Ms Oudeh to rekindle their relationship.

She claimed Tarin told her niece ‘this time you are mine’.

On April 2, 2017, Tarin and Ms Oudeh had an Islamic marriage, but Ms Norris said the wider family sensed something was wrong.

Shortly after the wedding, Ms Oudeh looked ‘disturbed’ as she told her aunt about a remark Tarin made to his new wife, as they signed nuptial paperwork. 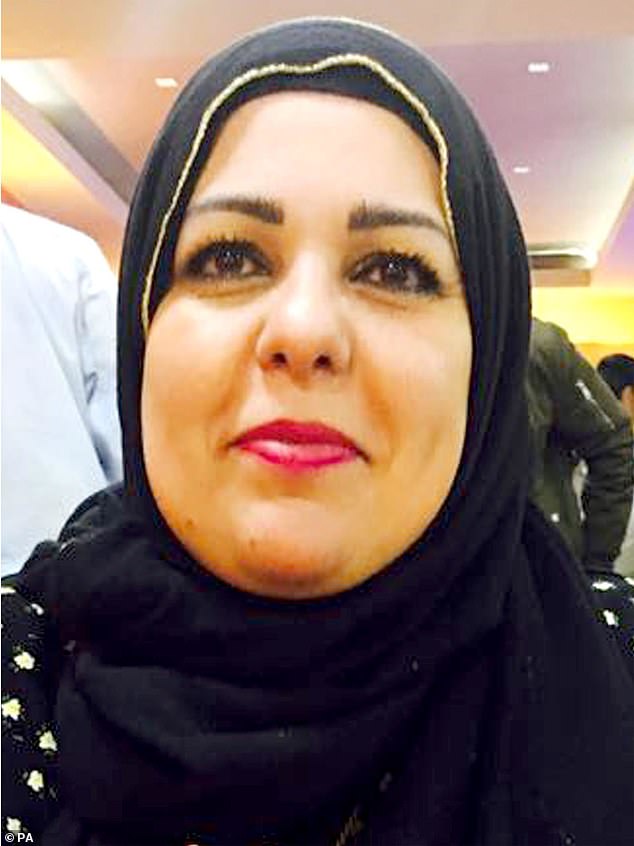 Ms Oudeh’s mother Khaola Saleem (pictured), 49, died alongside her daughter after Tarin opened fire at them outside her home in Solihull, West Midlands, on August 27, 2018

‘He turned around to her and whispered in her ears ‘in our culture, we don’t have divorce, now you’re my wife, the day you leave, I will kill you’,’ said Ms Norris.

After the wedding, Ms Norris said: ‘He (Tarin) became very controlling and became quite obsessive, that she was his belonging.’

The marriage started to break down again after Tarin travelled to Afghanistan at the end of 2017, where it emerged he had another wife and three children – with a fourth on the way.

In January 2018, Ms Oudeh told him the relationship was over but he started stalking her again and ‘would sleep in the car outside her house, for days,’ Ms Norris said.

On one occasion, he sent Ms Norris an image on Facebook of his left arm, in which he had used a ‘razor’ carving Raneem’s name.

Ms Oudeh briefly got back with Tarin, but by April 2018 wanted rid of him for good – which is when matters ‘really escalated’.

Ms Norris claimed her niece tried to be direct with Tarin, because her repeated calls to police led to little action, with visits from social workers leaving her ‘scared’ they would remove her child.

‘She called police a number of times before and… they didn’t really listen to her properly and didn’t take her seriously, or they blamed her’, she said.

‘They’ll say to her ‘you’re wasting our time, you need to deal with him yourself, kick him out – you can’t call us all the time. Ask him to move out’.’

Ms Norris also told how Ms Oudeh was ‘concerned about her baby’, and social service’s involvement.

‘She wanted to co-operate with social workers but was too scared that if she tells them everything, they will take her baby away,’ claimed Ms Norris.

In August 2018, Ms Oudeh applied for a non-molestation order, but on the night of August 26, Tarin followed Ms Saleem and Ms Oudeh to the Rotana Shisha Lounge.

Tarin ‘slapped’ her in the restaurant, then followed them as they left.

Ms Hunt told jurors: ‘The police were called – their response, you’ll hear, was delayed due to a firearms incident.

‘It was just after midnight Janbaz Tarin murdered Raneem and Khowla outside her address.

‘He was subsequently convicted of both murders.’