Tim Minchin has yet to disappoint, even as his own disappointment shines through in some of his most poignant and valid art that has been able to reach a stage in recent times.

Performing the world-premiere of his serious studio album Apart/Together, with the West Australian Symphony Orchestra at the Perth Festival, under the stars in Kings Park, both audience and artist thanked them as lucky. 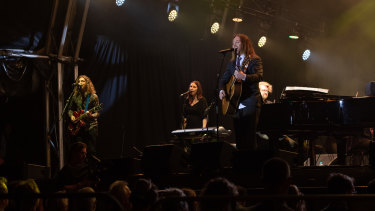 It was a Summer Romance for Tim Minchin Perth audiences as he performed his album Apart/Together, with WASO, at Kings Park for the Perth Festival.Credit:Corey James

After six weeks of quarantines and delay brought on by a snap lockdown the week the festival was due to launch, Minchin was finally able to perform on Saturday night alongside long-time friend and WASO conductor Jessica Gethin.

And accompanying Minchin for his opener, Summer Romance, was festival artistic director Iain Grandage on piano.

It was a fitting opening as Minchin’s lyrics “I’m holding on” crescendoed to accompanying drums and enlivened the senses to the mental journey that everyone had been on before that moment.

“If you came expecting a comedy show, sucked in. This is your punishment for not reading the instructions,” Minchin chided the audience to much mirth.

“You have to sit in this hellscape for like 80 minutes suffering through my embittered middle-age crisis album until you f–king learn to read the tin.”

But the comedy still came.

His time on stage almost doubled with gags over his experiences that fuelled his album, including pokes at vegans, Donald Trump, Paris’s Pont Neuf and Perth, as well as his comical answers to audience questions. 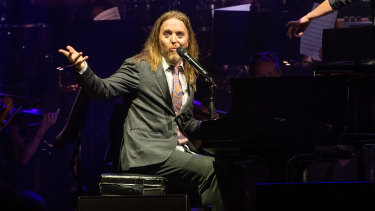 A comedian always, Minchin couldn’t help himself once he got on stage.Credit:Corey James

And finally to being the only musician who could make a ‘glossary of terms’ entertaining, even chant worthy.

“If you’re wondering why I have never really been a proper rock star it’s because my songs require a ‘glossary of terms’,” Minchin joked ahead of his “bitter” Leaving LA tribute song.

Yet there was nothing sour about his Leaving LA performance, which was very much in the vein of American pianist-singer Ben Folds, who has also been known to grace the Kings Park stage alongside WASO.

From there Minchin masterfully traversed The Absence of You, Airport Piano, his mournful title song Apart/Together, which featured a talented trumpet solo from WASO’s Brent Grapes, as well as his toe-tapping Beautiful Head and soul-searching I’ll Take Lonely Tonight.

If there were faults, a question over Minchin’s ability to hit the high notes in the acoustic ballad I Can’t Save You became a distant memory once he reached his farewell song Carry You, possibly one of his best of the evening.

And even his most jarring composition, Talked Too Much, Stayed Too Long, erupted with applause as Minchin showed spectacular showmanship during his piano solo.

In a final crowd-pleasing flourish, Minchin performed his Matilda the Musical’s When I Grow Up and 2009 hit White Wine in the Sun, which rounded out his theme of family in a truly ‘WA Made’ feat of musical artistry.

There’s no doubting you can take the man out of Perth, but you can’t take Perth out of the artist.