Passengers ‘begged’ driver to stop during 100mph police chase on M1… seconds before crash that ruined three lives: Motorist who left friend in wheelchair and lost half-brother his arm is jailed for nearly four years

A banned driver has been jailed after passengers ‘begged’ him to stop during a 100mph police chase the wrong way up the M1 – seconds before a horror crash which ruined three innocent lives.

Macaulay Billings, 26, ploughed his black Skoda Fabia into a BMW causing four victims, including his own half-brother, to suffer life-changing injuries including the loss of limbs.

Billings’ half-brother, the rear passenger, had to have his left arm amputated and suffered two broken ribs and a broken leg after the crash on April 18 this year.

A plate had to be put into his right wrist and skin grafts had to be taken from the top of his leg for his left arm.

Moments before the crash, a friend in the front passenger seat ‘begged’ Billings, from Hull, to slow down – or let his passengers out – and ‘thought he was going to die,’ a court heard.

He is now wheelchair-bound after suffering multiple injuries including nine broken ribs, a liver laceration, fluid on his lungs, broken right leg and ankle, and five broken toes. 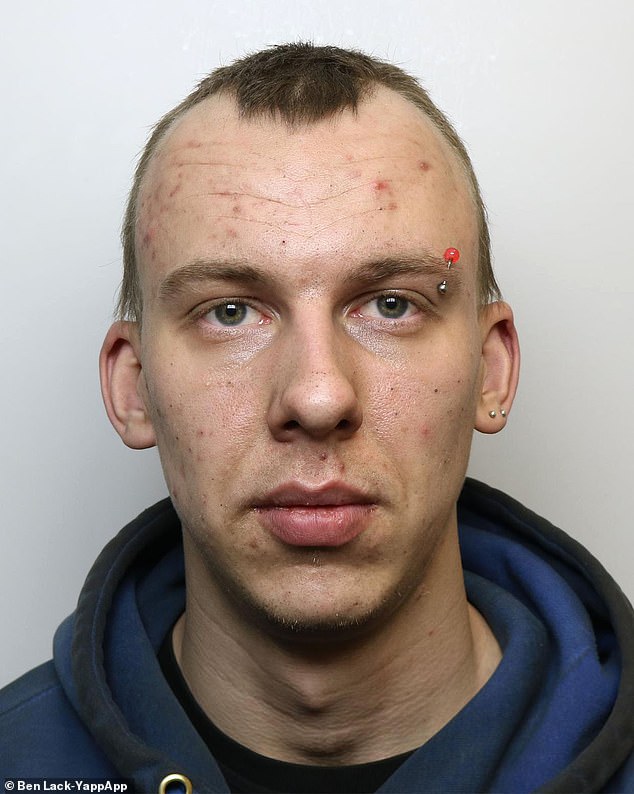 Macaulay Billings (pictured), 26 from Hull, ploughed his black Skoda Fabia into a BMW causing four victims, including his own half-brother, to suffer life-changing injuries 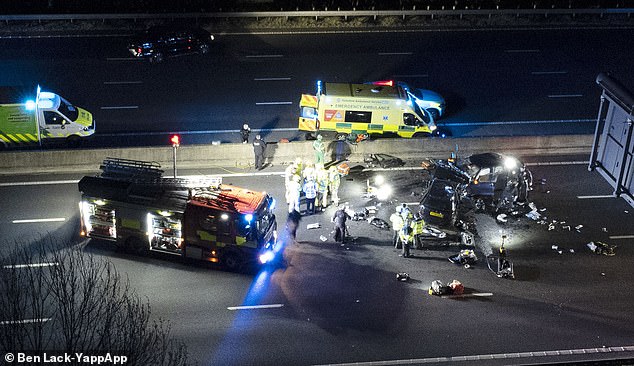 Billings’ half-brother, the rear passenger, had to have his left arm amputated and suffered two broken ribs and a broken leg after the crash on April 18 this year. Pictured: Emergency Services at the scene of the serious crash on the M1 near Wakefield on April 18

The BMW driver, a professional musician, suffered an internal haemorrhage, a lacerated spleen, breach of the pelvic wall, and multiple fractures including his spine.

He lost a litre and a half of blood, suffers PTSD and flashbacks, struggles to play the organ properly due to his injuries.

Billings himself was himself left fighting for his life but bragged about getting back behind the wheel to nurses from his hospital bed.

But when Billings spotted he was being followed, he led police on a high-speed chase that ended in horrific consequences.

He jumped several red lights and drove at 100mph down a 30mph street before heading for the motorway.

Police tried to stop him joining the M1 in the wrong direction and gave up the pursuit as the Skoda veered down a grass verge onto the slip road and into the oncoming traffic.

They watched in horror as the car drove the wrong way on Britain’s busiest road, narrowly missing other drivers, and weaving in and out of the way of cars for more than three miles, before crashing head on into the BMW between junction 39 and 40. 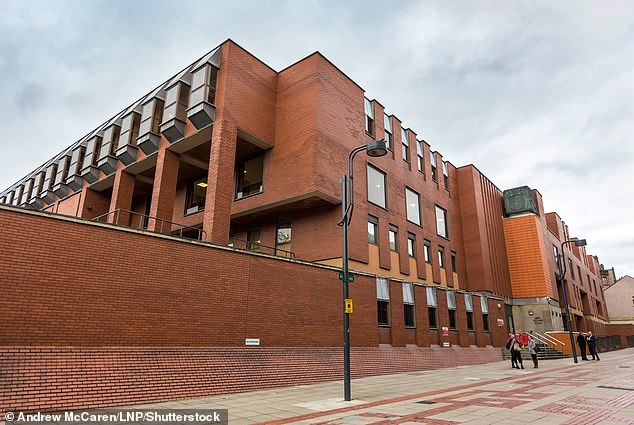 ‘It is difficult to think of a more callous disregard for other road users,’ said Judge Robin  Mairs at Leeds Crown Court as he banned Billings from driving for nine years and sentenced him to three years and seven months

Mitigating, Nicholas Leadbetter, said: ‘He appreciates that he has – to be blunt – ruined his brother’s life and has most likely caused ruin to other people’s lives.’

Jailing him for the maximum three years and seven months and banning him for nine years, Judge Robin Mairs said: ‘It is difficult to think of a more callous disregard for other road users.