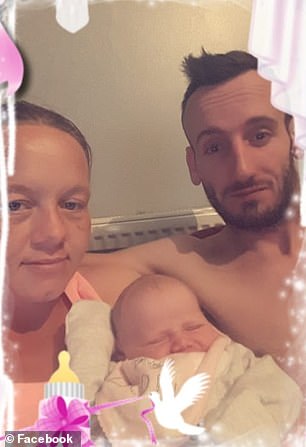 A heartbroken couple have warned others about the dangers of kissing newborn babies after their daughter died at only 14 days old.

Kelly Ineson, 30, and fiancé Thomas Cummins, 26, were told their little girl Kiara most likely caught the herpes simplex virus from a visitor when she became sick just ten days after she was born.

Little Kiara was placed in an induced coma but doctors told her devastated parents that if she did pull through she’d probably be badly brain damaged.

The mother, who has three other children, has now shared her story in a hope to warn other parents about the virus and avoid another baby getting sick.

She told the Daily Star: ‘We were always so careful, not letting anyone near her if they seemed poorly or hadn’t washed their hands.

‘I never in my worst nightmares imagined a kiss could kill my baby, and I don’t want any other parents to go through this.’

When Kiara became sick Kelly and Thomas were told their daughter had most likely contracted the virus through someone kissing her.

Herpes in babies is caused by the herpes simplex virus which is highly contagious and can cause and spread via cold sores in adults.

The virus can be very serious for a young baby, whose immune system hasn’t fully developed to fight off the virus.

Sometimes neonatal herpes will only affect the baby’s eyes, mouth or skin. In these cases, most babies will make a complete recovery with treatment.

But the condition is much more serious if it’s spread to the organs.

NHS England says nearly a third of infants with this type of neonatal herpes will die, even after they have been treated.

WHAT IS NEONATAL HERPES?

Neonatal herpes occurs when a newborn baby catches the virus.

The herpes simplex virus is highly contagious and spreads via cold sores or genital ulcers in adults.

Herpes can be very serious in newborns due to their immune systems not being strong enough to fight off the infection.

If the virus spreads to a baby’s organs, nearly a third die even if they have been treated.

A baby can be at risk if its mother catches genital herpes for the first time during the first six weeks of her pregnancy.

Such women can pass the infection to their babies if they have a vaginal delivery.

Cold sores are at their most contagious when they burst but remain contagious until they have completely healed.

A baby may be infected if it:

If a baby becomes lifeless, will not wake, has breathing difficulties, or has a blue tongue or skin, call 999 immediately.

To reduce the risk of a baby being infected, people should not kiss infants if they have a cold sore and should wash their hands before touching them.

‘You might be one of the people who has cold sores that are so mild you haven’t noticed them, yet your mild infection could be transferred to a new baby.’

Ms Friend said Aliza was healthy for the first 36 hours of her life before she developed a fever, became lethargic and lost interest in food.

She then quickly deteriorated as the disease ‘ate her lungs and brain’, leaving her struggling to breathe and suffering seizures.

The young mother urged people in a Facebook post to: ‘WASH YOUR HANDS. DO NOT KISS BABIES.’