What those Royal waves really reveal: Our palm expert’s blind reading of regal hands is uncanny – so can you spot which wave belongs to which member of the royal family? 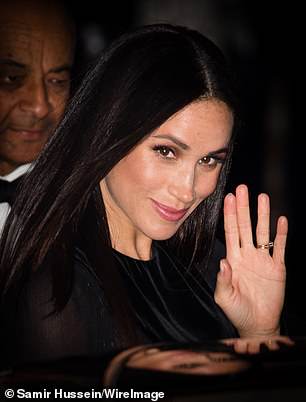 They show off their regal waves for thousands on state occasions and royal walkabouts.

But although these events are public, they are actually the times the royals reveal most about themselves, according to the science of Hand Analysis.

This 21st century version of palmistry looks for clues which have been validated by research into more than 50,000 palm-prints, personality tests and medical records.

Helen Elizabeth Evans, the UK’s top scientific hand and fingerprint analyst, uses the system developed over the past 20 years to read the hands of professionals and guide them to success and happiness.

She says: ‘The lines on the right hand represent the side the royals want to show the public. The left hands reveal their private sides.’

Can this be true? We asked Helen to read these royal palms without knowing who they belonged to. The results were uncannily accurate… 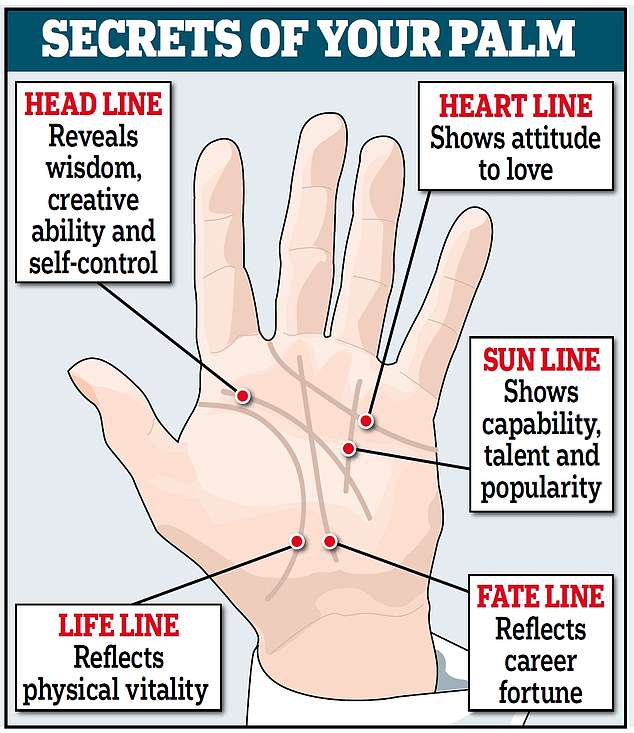 The lines on the right hand represent the side the royals want to show the public. The left hands reveal their private sides, palm expert reveals

1. A HAPPY HUMANITARIAN IN SEARCH OF A MISSION 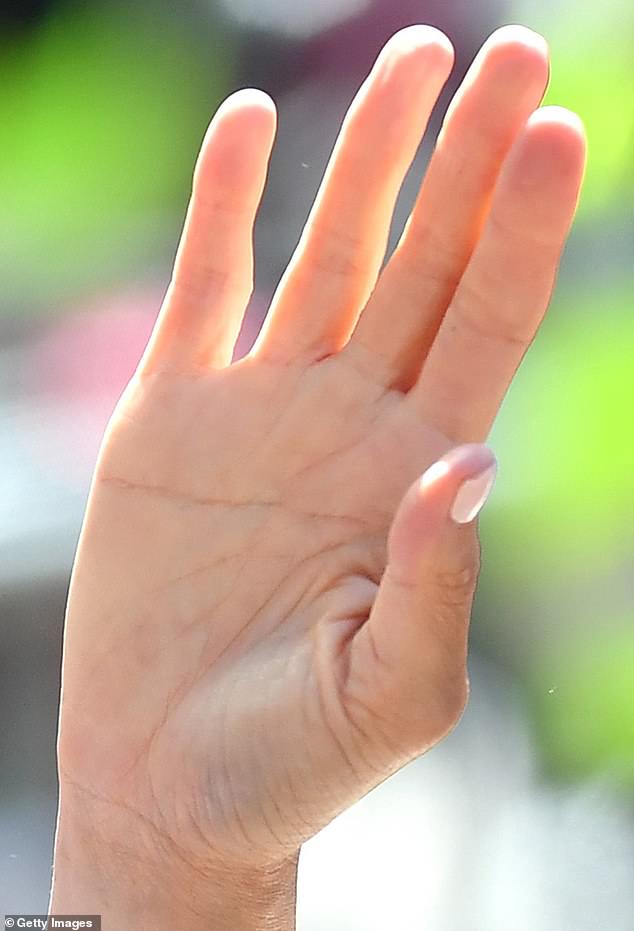 A HAPPY HUMANITARIAN IN SEARCH OF A MISSION: Feminine with long, willowy fingers

These hands are very feminine. From the long, willowy fingers, it’s clear these are the hands of a sensitive, artistic person. This is the most interesting royal palm thanks to a very unusual feature on the right hand, known as a Simian Line.

Usually the Head Line and Heart Line are separate and spaced apart as they run into the centre of the palm. However, on this royal, it shows up as only one line which divides the hand in half horizontally.

This special feature is known as a ‘gift marker’ —and reveals a person of enormous drive, energy and focus. Add this to the long, straight Heart Line on their left hand, it reveals a considerate person likely to be a humanitarian.

This person will also need a mission which they can pour their energy into to be happy. This is not a royal who will want to hide behind the scenes, more someone who will take to the world stage and make a positive impact.

Also, the equal length of ring and index fingers mean they really understand feelings which will also make them a good parent.

2. CHILDLIKE REBEL WITH A PASSION FOR FOOD 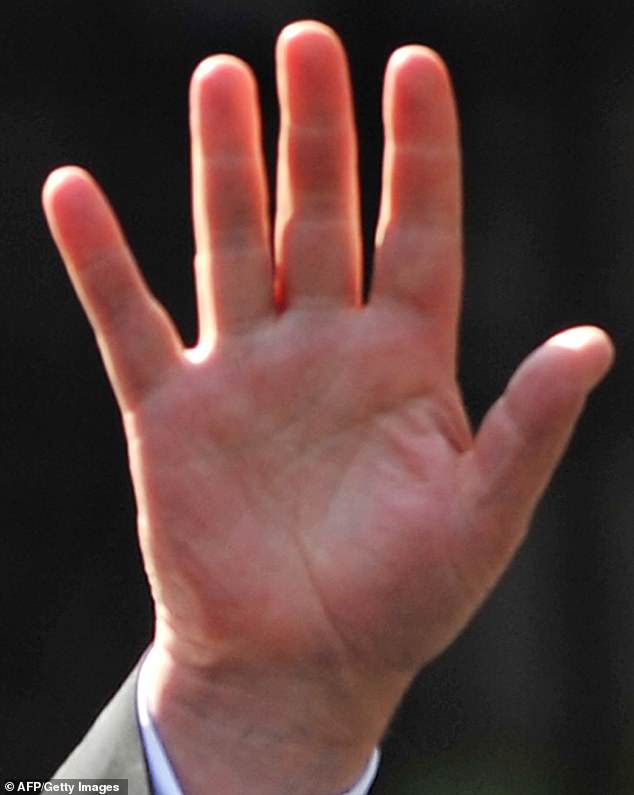 CHILDLIKE REBEL WITH A PASSION FOR FOOD: Thick bases on this royal’s fingers hint at a childlike, immature side

The thick bases on this royal’s fingers hint at a childlike, immature side, or perhaps a passion for food. The ruddy colour and bloated appearance of the hands also suggest this is a person who needs to pay more attention to their health. The Life Line is short too, suggesting low energy.

The length of the fingers also show this is a royal who loves to talk.

The slightly longer ring finger suggests they love a bit of appreciation and applause — if they weren’t a royal they could have been a celebrity food critic!

Other markers show this royal may feel conflicted by the expectations of being a member of the Royal Family.

For example, the Life Line and Head Line start and stay together for about an inch, so this person is comfortable following the traditions they’ve grown up with. However, this conflicts with the shortish middle finger, which suggests a desire to rebel or break ‘the rules’.

That could mean this member of ‘The Firm’ is not sure how to get his needs met and still fit in with the expectations of his position.

3. THINKER WHO CARES ABOUT APPEARANCE 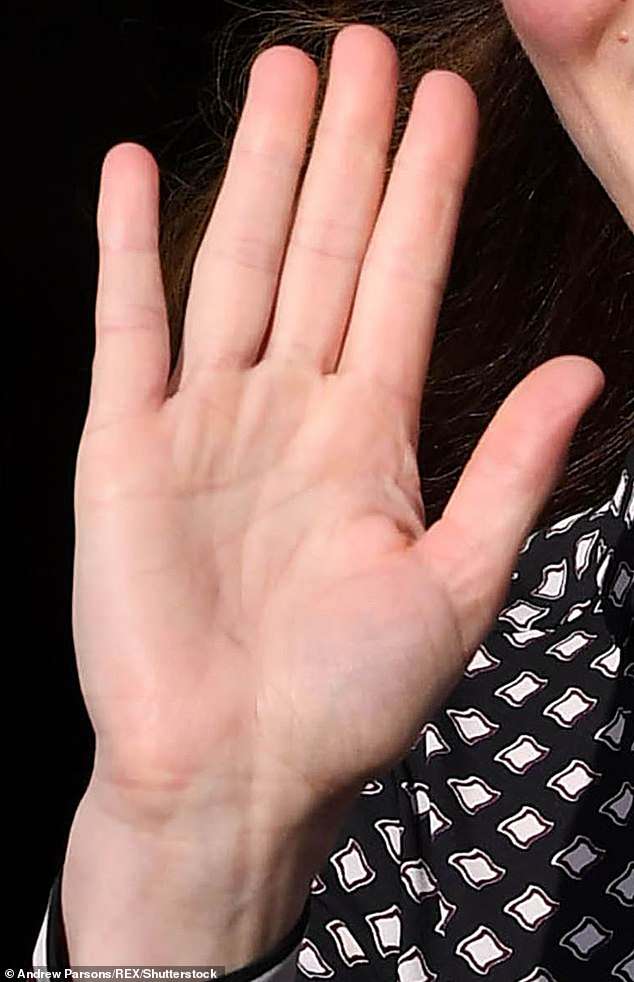 THINKER WHO CARES ABOUT APPEARANCE: Slightly longer ring fingers emphasis someone who can be quite analytical

This royal has the fingers and palm of a thinker, someone who can be quite analytical, emphasised by her slightly longer ring fingers.

This means she is probably quite visual and her appearance may be quite important. It also means this is someone who thrives on appreciation and applause!

This royal holds their little finger off to the side, suggesting a highly private person who prefers not to expose their vulnerabilities.

Both thumbs are held close to her palm, suggesting again they like to play their cards close to their chest.

All in all, a strong individual capable of restraint in pursuit of what she believes in.

4. FROM YOUNG REBEL TO INSPIRATION 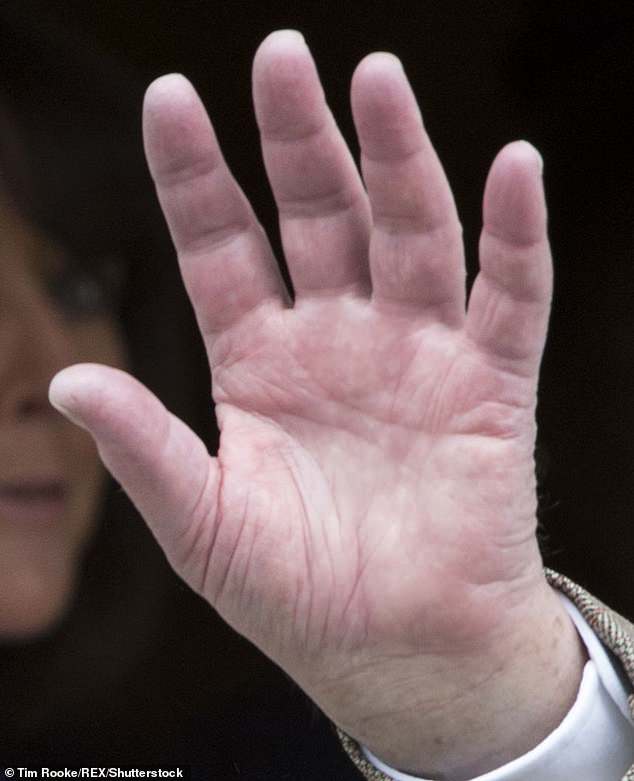 FROM YOUNG REBEL TO INSPIRATION: Head and Heart Lines are tied together, showing this royal has traditional values

The three lines, crossed by three others, at the bottom of this royal’s index finger, shows this is someone with very high standards.

Like many royal palms, the Head and Heart Lines are tied together, showing this royal has traditional values. However, the short distance between the height of this person’s middle fingers and their index and ring fingers, shows they have a rebellious streak. This is likely to have shown up more in their youth.

There are also four short parallel lines under the joint between the ring and little fingers. This is ‘the gifted healer’. It can mean someone who is inspirational in helping others.

It’s possible this royal will have expressed this through charity work.

5. A HEDONIST WHO LOVES TO TAKE CHARGE 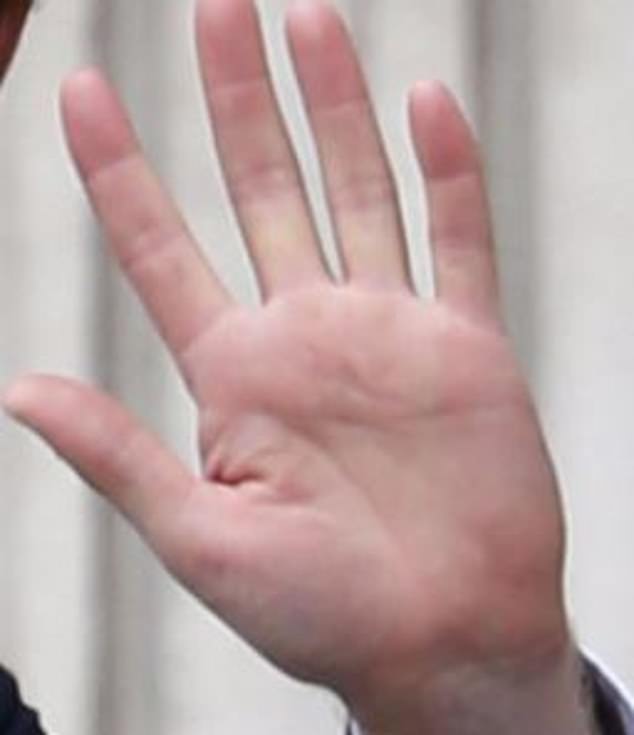 A HEDONIST WHO LOVES TO TAKE CHARGE: Area under the thumb of this manly hand is quite plump

The area under the thumb of this manly hand is quite plump.

This shows a person who likes to have fun and may have been a bit of a hedonist in their youth. This royal’s Heart Line is curvy, showing that they are naturally passionate.

However, as the line straightens out towards the end, it suggests this person curbs their passionate nature, possibly out of duty.

In both hands, the index, or pointer-finger, looks the strongest and has more of a ‘platform’ or fleshy pad. This suggests someone who has put a lot of energy into being in charge, carving out their turf and leading the way in what matters to them.

As these qualities also show up on the left hand, this royal will be no walkover at home either — and that will help make them a good parent and partner. 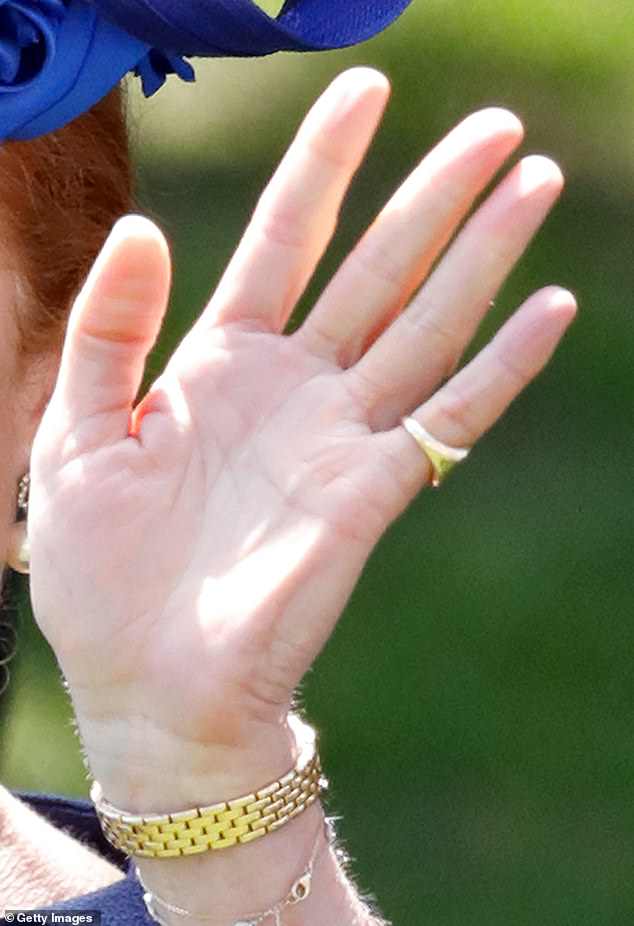 CHATTERBOX WHO’S ALWAYS IN TROUBLE: Middle fingers of this royal’s hands are not much longer than the index and ring fingers, a sure sign of a rebel

The middle fingers of this royal’s hands are not much longer than the index and ring fingers, a sure sign of a rebel.

This person also has a light, horizontal line joining the Head and Heart line. This means it’s hard for them to decide whether to go with their heart or logic. A slightly upward curving Heart Line shows a caring character who tries to do the right thing, even if their inner rebel sometimes gets them into trouble.

The way their vertical Fate Line — also known as a Saturn Line — underneath the middle finger stops at the Head Line shows this side probably kicks in when they get bored.

The little finger is long, suggesting this is a person who probably loves to talk.

The ring at the base of their little finger, covering the bottom segment — the intimacy zone — also shows this person wants to protect themselves from being hurt emotionally.

7. A LOGICAL THINKER WHO GETS THE JOB DONE 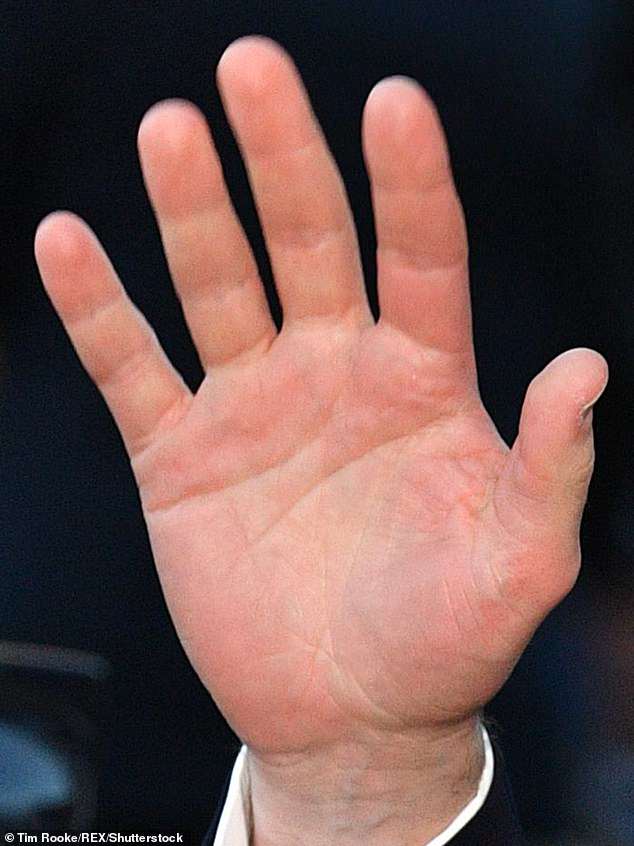 A LOGICAL THINKER WHO GETS THE JOB DONE: A square, masculine hand which basically says: ‘Let me get the job done’

This royal has a square, masculine hand which basically says: ‘Let me get the job done.’

His Head Line is the straightest and least curved of them all, revealing this is the most logical person in the family.

There is also a Fate Line which goes up vertically through his palm towards his middle finger.

This shows someone who is a doer who follows through.

This royal’s Head Line is long and straight and stretches into his zone of intuition — the plumper area down the side of your palm opposite the thumb.

Our hands can change over time.

If this line keeps developing, it will mean this royal is going to start combining logic with intuition.

This will help them see things from many different perspectives.

The long little fingers show this person is a really strong communicator, while the thick, strong index fingers show he will also be very persuasive.

Whoever this person is, they are going to be great asset to the Royal Family. 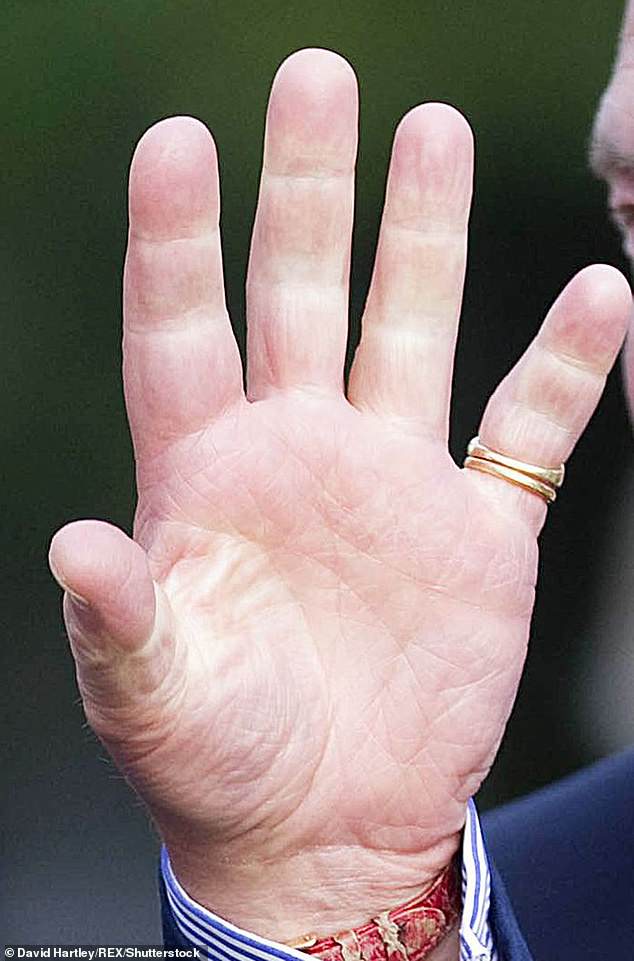 These are complex, masculine hands, full of contradictions.

They look like the stubby-fingered hands of a traditional ‘builder’, solid, rough and earthy.

The Life Line is deeply etched and long, showing this person has lots of energy.

There is also a well-developed ‘intimacy area’ in the bottom segment of the little finger.

This is someone who can share deeply with others. There are criss-crosses too in this person’s Moon Zone, at the base of the palm opposite the thumb.

What this means is it’s someone who has tried lots of different mystical things.

However, looking at the really short middle segment of the little fingers, this is also a person who doesn’t do negotiation.

The approach is: ‘It’s my way or the highway.’

9. STRONG, POWERFUL AND BRIMMING WITH ENERGY 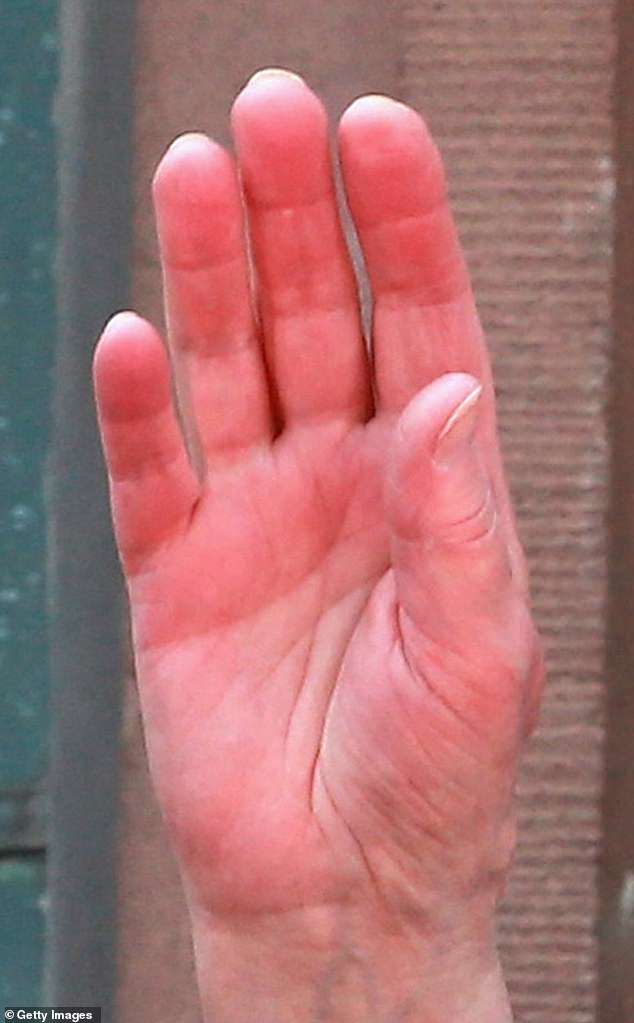 STRONG, POWERFUL AND BRIMMING WITH ENERGY

This is a strong powerful palm of an older royal in the shape of a long rectangle, a sign of a person who thinks things through.

There is also a strong Fate Line that stretches up vertically through their hand, showing this is someone who finishes what they start.

These are also balanced hands with strong, straight fingers, which is a sign of an ethical person with a sense of self who is comfortable with their personal power.

The slightly longer index finger shows they like to be in charge.

They have a passionate Heart Line on both hands. So they will prioritise what they believe is important over and above other people’s feelings and needs.

Their Life Line is deep and long showing they have extraordinary energy reserves.

The combination of all these factors suggests a person with a clear sense of their own place in the world, something that may have served this royal well over their lifetime.

10. A ROYAL WHO WOULD DO ANYTHING FOR LOVE 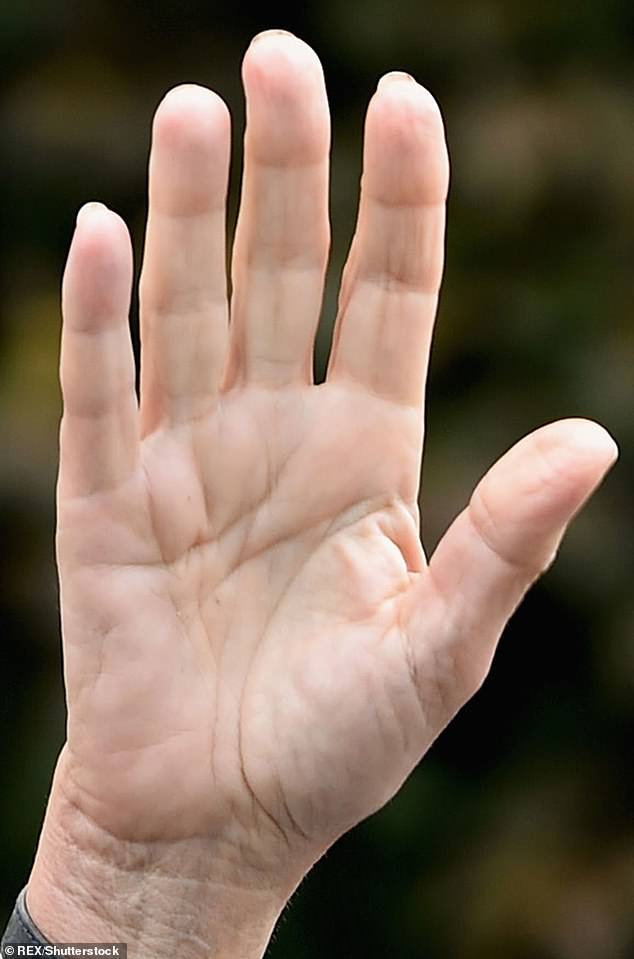 A ROYAL WHO WOULD DO ANYTHING FOR LOVE

On this palm, the Fate Line stops at the Heart Line.

We call this The Grand Gesture — and it’s a sign of someone who will give up everything for love.

However, unlike most of the other royals, the Head and Life Lines are not tied together at the start.

This shows this is someone who likes to make up their own mind.

Also, unlike many of the other royal hands, there isn’t a ‘platform’ where the index finger meets the palm, which is often a sign of someone who likes being in charge.

However, there is a ‘platform’ underneath the ring finger on the left palm, which is her private side.

This shows this royal is happiest being the boss at home, while others — perhaps a partner — take the limelight in public.

AND THE ANSWERS ARE… 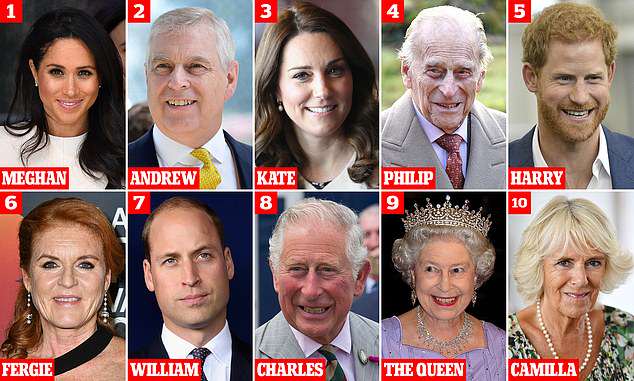