London: Buckingham Palace plans a weekend of community events and voluntarism to mark the coronation of King Charles III, looking to highlight the monarchy’s links to the nation when Britain crowns a new sovereign for the first time in 70 years.

The plans were revealed on Saturday when the palace released the schedule for the three-day coronation weekend, which will begin with the crowning of Charles and Camilla, the Queen Consort, on Saturday, May 6. 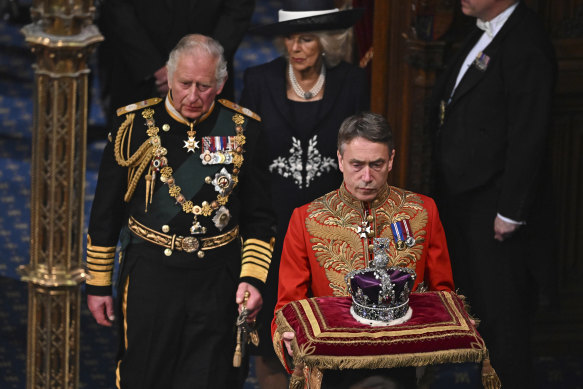 The coronation ceremony for Prince Charles will take place on Saturday May 6 at Westminster Abbey.Credit:AP

The ceremony at Westminster Abbey will be preceded by a procession from Buckingham Palace to the abbey. It will be followed by another procession, in which Charles and Camilla will be joined by other members of the royal family, and an appearance on the palace balcony.

But there will be more to the weekend than crowns, sceptres and ermine robes.

The palace wants the coronation to demonstrate that the monarchy still has a role to play in a multicultural nation struggling to deal with a cost-of-living crisis, budget cuts and a wave of strikes by public-sector workers.

While there was widespread respect for Queen Elizabeth II, as demonstrated by the tens of thousands of people who waited hours to file past her coffin after she died in September, there is no guarantee that reverence will transfer to her eldest son. 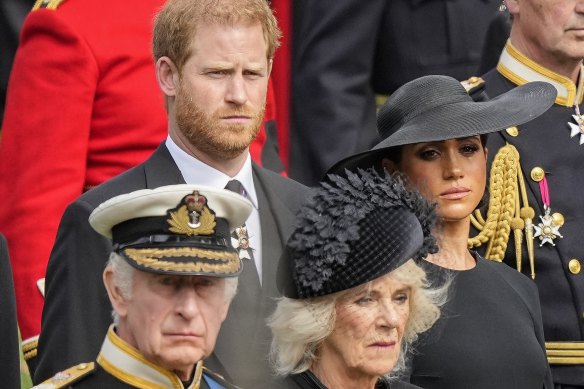 Buckingham Palace has announced details about the coronation of King Charles III, pictured with Camilla, the Queen Consort. It remains unclear if Prince Harry and Meghan, Duchess of Sussex will have a role at the event.Credit:AP

The coronation will be a solemn service presided over by Archbishop of Canterbury Justin Welby, but the palace also plans a weekend of events that highlight the various communities and cultures that contribute to modern Britain.

The palace is asking neighbourhoods around the nation to take part in the “Coronation Big Lunch” on Sunday, May 7 — the latest incarnation of the block parties that have become a staple of big royal celebrations.

That night there will be a concert at Windsor Castle featuring a choir drawn from amateur troupes across the United Kingdom, including refugee choirs, National Health Service choirs, LGBTQ singing groups and deaf signing choirs. The “Coronation Choir” will perform alongside another one made up of singers from across the Commonwealth who will appear virtually during the televised concert that will also include as yet undisclosed headliners.

During the concert, locations across the country will be lit up using projections, lasers and drone displays. 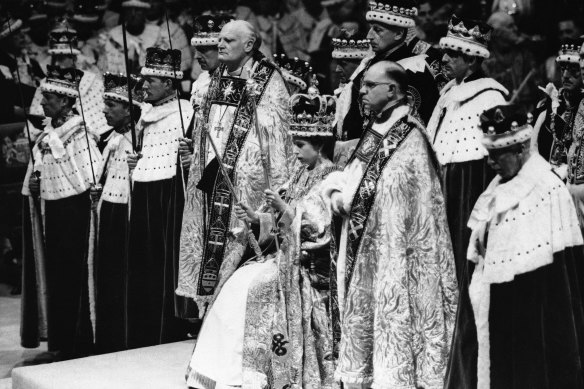 Queen Elizabeth II is crowned the monarch of Britain in 1953.Credit:AP

The next day, the palace is inviting people around the country to take part in “The Big Help Out,” encouraging them to volunteer in their own communities.

“The Big Help Out will encourage people to try volunteering for themselves and join the work being undertaken to support their local areas,” the palace said in a statement. “The aim of The Big Help Out is to use volunteering to bring communities together and create a lasting volunteering legacy from the coronation weekend.”