Senior police are usually good at three things. Calling for extra powers to fight crime, ordering steaks and red wine at long lunches (we once went under lights and sirens down the tram tracks from such a lunch to a dinner engagement on the other side of town) and holding press conferences to declare victory over organised crime.

More than 30 years ago I took one to Florentino, the swish Melbourne restaurant, to discuss secret stuff. He asked just one question: “Who’s paying?” 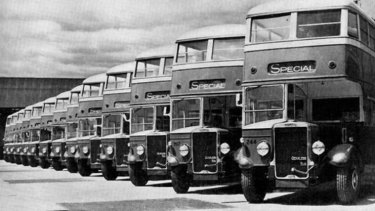 The beauty of the Ironside intercept is police have captured the “golden thread” – the crooks’ own words to be used in court. The crooks were so confident in the system that they used direct language to discuss criminal conspiracies. Juries love that stuff. Defence lawyers don’t.

Police say they have mined only two per cent of the material, like prospectors who have picked up glittering nuggets without even breaking the surface. Much of this intelligence will not make sense on a national level but when it trickles down will provide keys to hundreds of local crimes.

Ironside gives us a rare and sobering insight into organised crime and how police must respond – a model that has taken four decades for many in authority to accept.

While cracking the encrypted code is a hi-tech solution, the method of intercepting crooks’ communications is not.

Drug dealer Tony Mokbel and his senior team that ran a $400 million syndicate were nabbed after an informer managed to provide the key players with phones monitored by the Purana Taskforce.

US court documents list 17 key figures in the distribution of the An0m device. The seven Australians listed are based in Colombia, Asia, Europe and Australia.

So how did it work?

When international police disabled Phantom Secure, a Canadian encrypted service that let crooks destroy messages remotely, the FBI recruited one of the system’s former operatives, who was building An0m.

In exchange for a reduced sentence and $US120,000 ($156,000) he gave the FBI control and built in a back door. Three international gangsters (two connected to Australia) became enthusiastic controllers, spreading it across the world.

The spread to 300 crime groups acted like dye in an MRI, highlighting the international flow of the app to nearly 100 countries. It was marketed as “made by criminals for criminals”, with users paying around $1700 for a six-month lease. With about 12,000 devices it was bringing in more than $40 million a year.

The app, hidden under a calculator icon, was designed to be wiped remotely if a unit fell into police hands, concealing the user’s location – or so they thought.

Experts from the AFP helped unscramble the encrypted messages and the intelligence fed down the line to state detectives, many of whom only recently learned the source. 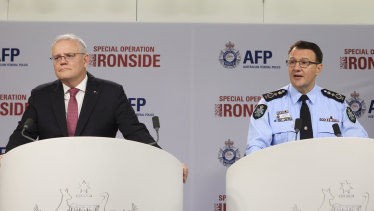 At the time police announced the breakthrough, Kershaw said it had resulted in 224 arrests, 525 charges, raids on six clandestine laboratories and thwarting 21 threats to kill. Police seized 104 firearms and weapons and almost $45 million in cash.

Considering the FBI paid the informer just $120,000 and $45 million has been recovered, it was a better investment than Bitcoin.

That’s all big-picture stuff, but what does it mean on the street? Plenty.

It proves how international syndicate heads order subordinates around Australia to commit crimes on a no-questions-asked basis.

One recent Friday night the Feds contacted Victoria with an urgent message. A shooting had been ordered by a bikie boss to be carried out at a Melbourne fight night.

The planning was so detailed police moved in to seize two stolen cars to be used by the hit team, cloned numberplates and guns. Someone is walking around today unaware they are alive because cops unscrambled the encrypted message.

The level of sophistication is astounding. Bikies are using number plate recognition cameras at key properties to identify law enforcement and rival gang vehicles. The gangs use drones to patrol and protect drug labs and safe houses.

The bikie model is to have chapters in drug source countries, with many of the bosses living in countries without extradition deals with Australia.

A key promoter of An0m, the Facebook gangster Hakan Ayik, fled Sydney more than 10 years ago but remains a key influencer with the Comancheros. 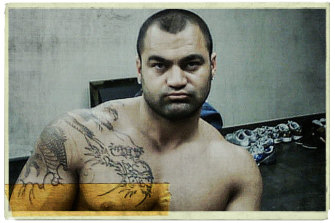 The real damage to the crime syndicates will not be the arrest of soldiers or even their generals but the doormen – the enablers who work in legitimate positions and open doors for the crooks. These lawyers, accountants, baggage handlers, officials and cargo controllers assist in the distribution of tonnes of drugs and the laundering of millions in funds. So far six police and one lawyer have been charged in the international raids.

On the docks an agent who organises an illicit container to piggyback on legitimate imports is paid $600,000 and a controller who warns when a drug container has been diverted to be examined receives $50,000.

When cops brag that they have seized a container of drugs but don’t mention arrests, you know the syndicate has been tipped off and have cut their losses.

If enablers are caught on An0m, their loss will be catastrophic to syndicates. Meatballs with meat cleavers can be replaced overnight, sleepers in positions of authority can’t.

Ironside acts as a template for future investigations, for without total, enthusiastic and committed co-operation between state, federal and international law enforcement, we are just kidding ourselves. The crooks are multinational, with 70 per cent of Australian organised crime assets held offshore. One division, one police force or one country cannot deal with crime that doesn’t respect national boundaries.

This is not a new thought but generations of blinkered, bent or blindingly stupid cops, more determined to protect their patch than do their job, have sabotaged collaboration.

When Victoria Police had key information to solve the 1977 murder of Griffith anti-drugs campaigner Donald Mackay, the head of the NSW investigation, Joe Parrington, came to Melbourne for a visit.

When detectives tried to brief him, he put up his hand and said: “I don’t talk to monkeys, I talk to the organ grinder.” They should have stuffed a banana in his ear and sent him back to Sydney.

The best cop of his generation, or any generation for that matter, was Victoria’s chief commissioner Mick Miller, who in 1980 argued for a national intelligence scheme.

He made sure the first director of the Australian Bureau of Criminal Intelligence was someone he could trust: Fred Silvester, my father.

Time and again Fred briefed the commissioners on what was needed and time and again they knocked him back. He wanted accountants, lawyers, tax and money-laundering experts embedded in law enforcement, plus international agreements on intelligence sharing. The commissioners wanted schnitzel sandwiches for lunch.

Little wonder they obstructed: One ended up in jail and another was lucky not to find himself in the same place.

With Ironside, the penny has finally dropped. It shows no one is above the law, as long as you have people with the courage and the drive to enforce it.