THE R rate in England could be as high as 1.6 in some regions, as figures show Covid infections are as high as early February.

One in 95 people in England had the virus in the week to July 10, according to the Office for National Statistics (ONS). 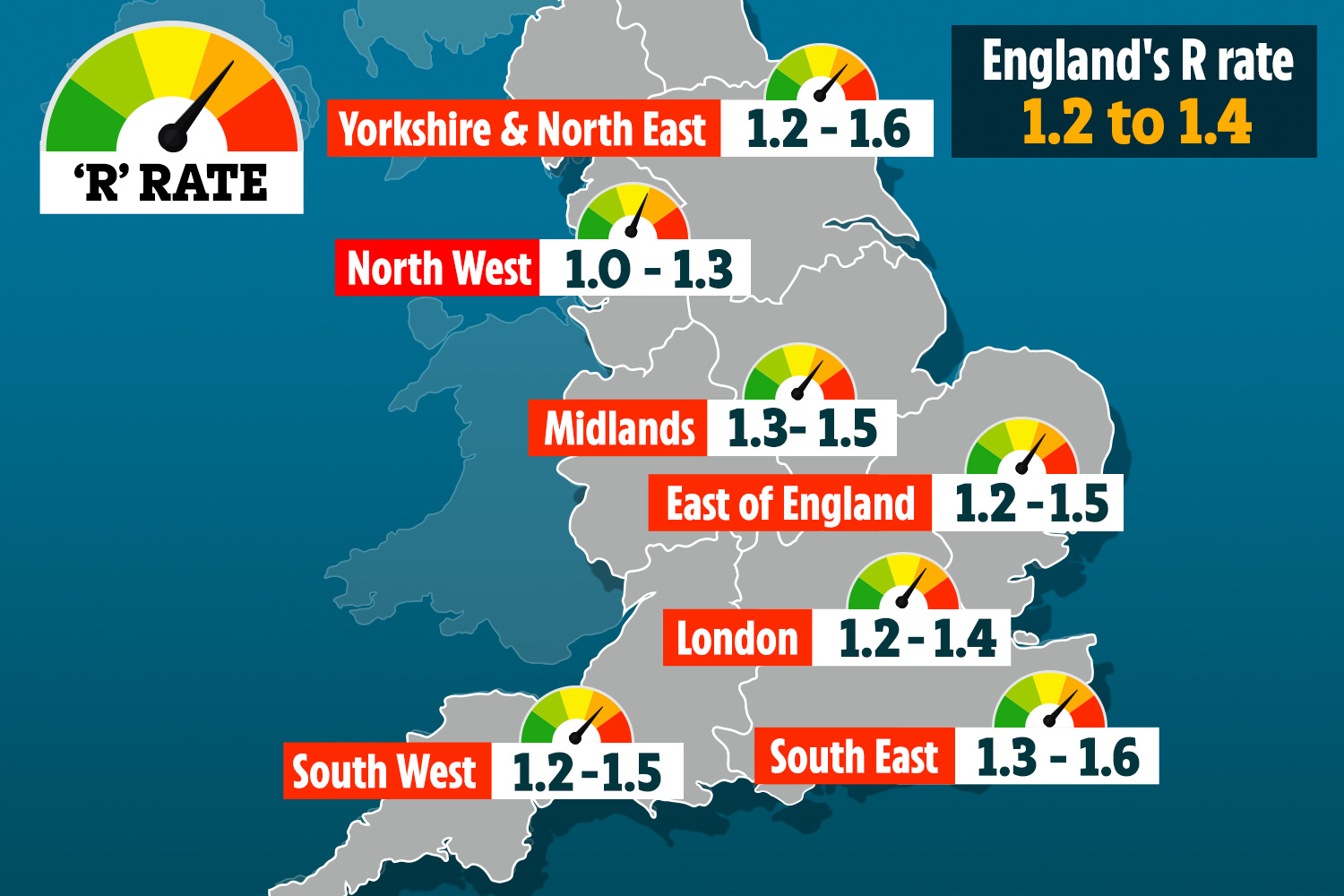 It’s up from one in 160 reported the previous week.

Rates have increased for all groups but are highest in those aged between year 12 and 24 years old – at one in 35.

Overall one million people in the country were estimated to have the virus in those seven days – more than five times the figure a month ago (105,000).

The figure is far higher than what’s recorded by the Government because it includes people without symptoms.

Case rates have been rocketing since some restrictions were eased and the Delta variant took hold in the UK.

The value is very slightly down on last week's estimate of between 1.2 and 1.5.

Therefore it's more evidence that the current wave has started to flatten out, or show signs in slowing down.

But the situation is expected to get worse after “Freedom Day” next Monday, when remaining rules are lifted in England.

More hospitalisations and deaths are expected – albeit at lower levels compared to the second and third wave.

Some 63 deaths were reported by the Department of Health yesterday, the highest since March.

And yesterday top medic Chris Whitty warned the number of people in hospital with coronavirus could reach "quite scary" levels within weeks.

Boris Johnson has begged Brits not to go wild and take the lifting of lockdown as an excuse to "have a great jubilee" next week.

A minister warned today the Government "of course" stands ready to reimpose lockdown if the Covid third wave becomes "unacceptable".

But Solicitor General Lucy Frazer insisted Freedom Day must still go ahead on Monday, declaring: "If we don't do it now, when?"

RISING IN ALL REGIONS

ONS data, published today, revealed the percentage of people testing positive for Covid-19 is estimated to have increased in all regions of England.

North-east England had the highest proportion of people of any region – around one in 40 – followed by the North West, with one in 55.

South-east England had the lowest estimate: around one in 220.

In Scotland, around one in 90 people are estimated to have had Covid-19 in the week to July 10 – up from one in 100 in the previous week. 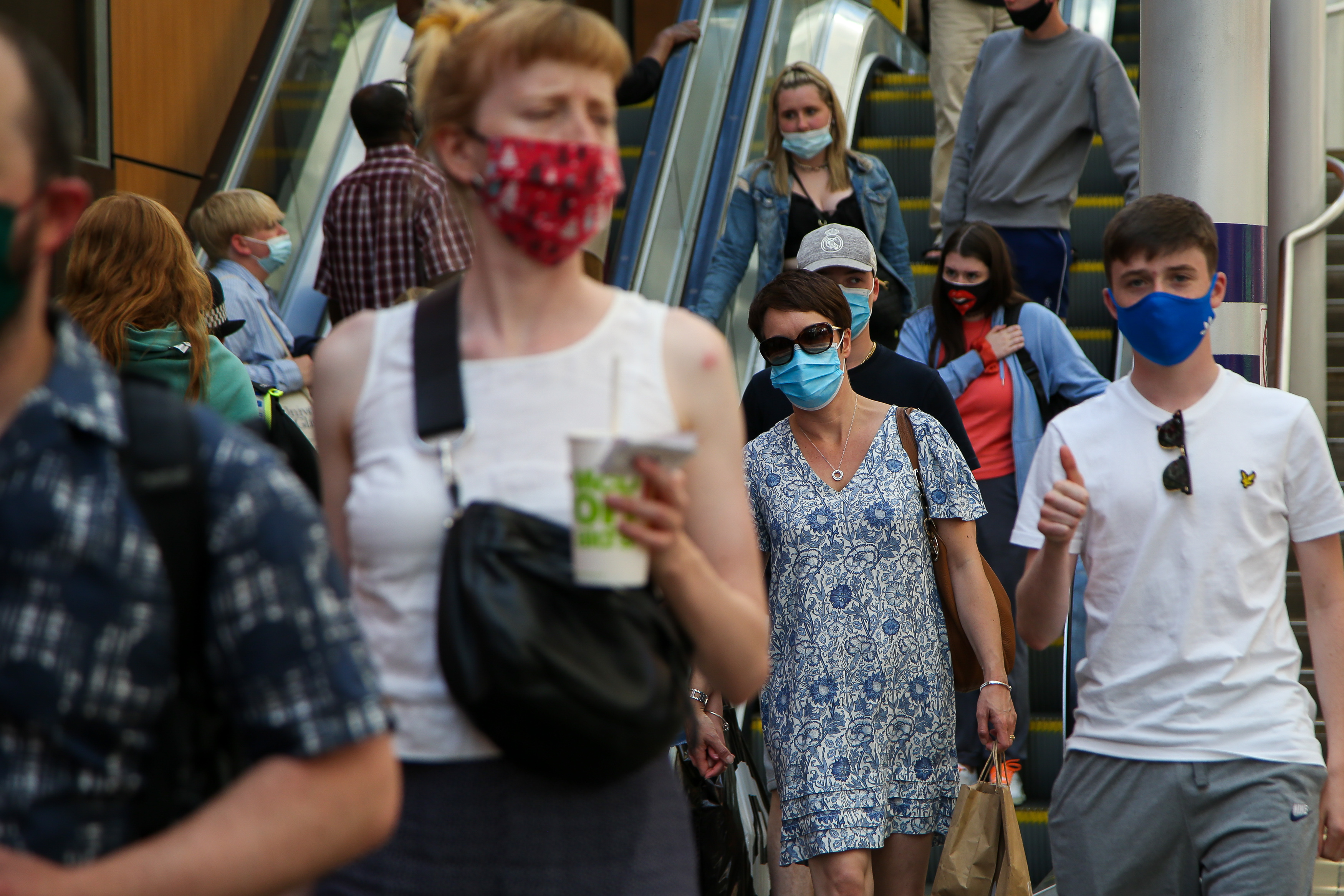 It’s the highest level since the ONS infection survey began in Scotland at the end of October 2020.

The ONS describes the trend as “uncertain” for Wales and Northern Ireland, with an estimate of one in 360 and one in 290 people infected, respectively.

All figures are based on swabbing random people in private households across the UK, and do not include care homes or prisons, for example.

Commenting on the stats, Prof James Naismith, director of the Rosalind Franklin Institute, and University of Oxford, said: "This is the last ONS update we will get before the quasi end of restrictions on Monday.

"It is a reasonable assumption that the wave has continued to grow this week and will accelerate after Monday.

"We are doubling cases every 12 to 18 days. Vaccination will act as a drag on the rate of spread thankfully.

“New cases of Delta will lead to long Covid, hospital admissions and deaths.

"The ratios between these have been massively changed by the safe and effective vaccines we are administering but the link is not eliminated."

With Yorkshire and the Humber (462.7), the two regions are recording their highest rate of cases since figures began in summer 2020.

All other regions are recording their highest rate since January, with the lowest in the South East (249.4).

Hospitalisations are also up, to 4.43 per 100,000 – up from 1.9 two weeks ago. However, any rise in hospital admissions would always lag behind cases.

Meanwhile, half a million people have been pinged by the NHS Covid app in just one week – as a cabinet minister admits it's too sensitive and will be changed.

It means a staggering two million Brits are now thought to be stuck at home.

The alerts tell people that they have been in close contact with some who has tested positive for the bug.

The number of alerts is up 46 per cent from the previous week.

The latest virus issues come despite the fact 87.5 per cent of Brits have had at least one jab, with two-thirds fully vaccinated.