NSW has reported 1063 new local coronavirus cases on Thursday, and six additional deaths from the virus as two Sydney hospitals continue to investigate outbreaks within its wards.

NSW Health said four of the people who died, all from western and south-west Sydney, were not vaccinated. 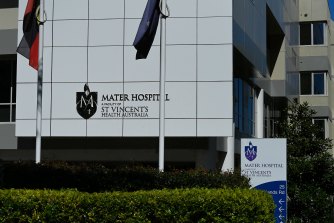 There has been a COVID-29 outbreak at the Mater Hospital in Crows Nest.Credit:Kate Geraghty

NSW Chief Paediatrician Matthew O’Meara also said it is “remarkable” that 28 per cent of children aged 12 to 15 have now received a first dose of a COVID-19 vaccine. The vast majority of the age group only became eligible for the shot on September 13.

A woman from the city’s west in her 50s who was fully vaccinated also died. The ministry said she had “significant” underlying health conditions.

A woman in her 90s from St Mary’s Villa Aged Care at Dubbo, in the state’s west, also died. She was the fourth resident to die from the virus at this facility.

NSW Health Minister Brad Hazzard said he wanted to highlight that western Sydney and south-west Sydney were “really doing a very good job”, noting cases in the area had almost halved over the past fortnight.

The rate of first-dose vaccination among people aged 16 and over is 83.6 per cent. The state’s second-dose rate is 55.5 per cent. 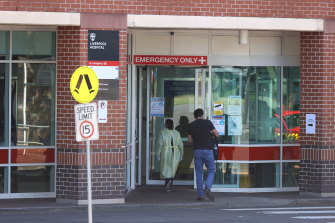 Twenty-four patients across six wards and five staff members have tested positive to COVID-19 at Liverpool Hospital, in the city’s south-west, over the past week, following an exposure event which is under investigation.

It is the second major outbreak at the hospital after 12 patients died following an exposure across its neurology and geriatric wards earlier this year.

Mr Hazzard said he had spoken to the chief executive of South Western Sydney Local Health District who had assured him investigations were ongoing into the source of the outbreak, although the result from serology testing was yet to be returned.

“Almost every hospital in the world and the pandemic has had intrusions it’s very hard to stop the Delta, period, but they’re doing everything to try and work out what caused the issue,” he said.

A COVID-19 cluster has also emerged at North Sydney’s Mater Hospital, with 14 patients and staff testing positive in the past week.

A spokesperson for the hospital said five patients, eight staff members and one carer have tested positive.

As a result of the cases the hospital has cancelled all elective surgery, the spokesperson said.

Mr Hazzard said lockdown restrictions will end in the regional areas of Orange and Glen Innes from midnight tonight.

“There will be still standard restrictions and precautionary measures but they will be out and back to a more normal life,” he said.

Mr Hazzard added that restrictions may also ease in Narromine on Saturday night if the area continues to record no cases.

Lockdown restrictions were eased in Brewarrina, Gilgandra, Lismore and Albury on Wednesday.

Those areas entered the restrictions which will be introduced statewide for fully vaccinated people once the state hits 70 per cent full vaccination next month.

Dr O’Meara said the uptake by more than 110,000 children in the 5-11 age group indicated they were treating the vaccination as they did other childhood vaccinations, such as HPV.

“I think it reflects the trust they have that this is a safe and effective vaccine, that has minor side effects and it is just like getting vaccinated as they normally do in their teenage years,” he said.

Asked if parents could expect they would be able to vaccinated children aged 5 to 11 this year, after Pfizer announced it would soon be seeking US approval for use of its vaccine in this age group, Dr O’Meara said they should manage their expectations.“That will take a while so what can you do to protect your child before then is … [have] other family members vaccinated,” he said.

There were 766 new local cases reported in Victoria, the highest figure recorded by the state this year.