The NSW prison system is being locked down statewide as COVID-19 clusters grow among inmates and staff, with authorities scrambling to boost vaccination rates and roll out rapid antigen testing.

Twelve cases among inmates at Parklea Correctional Centre were confirmed over the weekend and two correctional officers at Bathurst prison have since tested positive, bringing a cluster at the facility in the Central West to eight. 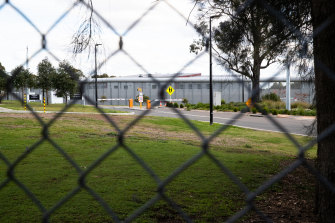 There have been 31 cases of COVID-19 at Parklea Correctional Centre over the last month. Credit:Janie Barrett

Amid significant fears about the Delta variant spreading through prison populations, Corrective Services has moved to lock down all facilities, according to sources familiar with the decision, but not authorised to comment publicly.

The lockdown is intended to help Corrections assess the COVID-19 measures in place in the prison system and prevent outbreaks growing.

NSW Chief Health Officer Kerry Chant said she was very concerned about the situation, and they were a target for the vaccination effort, which she called “the key” to controlling transmission.

“Obviously it’s a complex operational environment. People are living in close quarters, obviously people are coming in to work in those prisons, COVID can be introduced. We also have high turnover,” Dr Chant said.

“Prisons is something we would also see a role for RAT (rapid antigen test) testing and other testing. I know that they’ve been testing people and isolating them when they go into prisons in order to try and prevent COVID being introduced.”

She said locking down prisons and minimising movement were also important measures.

A spokeswoman for Corrective Services NSW said rapid antigen screening was in place at a couple of facilities, including the Surry Hills Cells Complex and Bathurst Correctional Centre, and would soon be rolled out at other locations.

The union representing Corrections officers is concerned that only half of the officers had been fully vaccinated and questioned the government’s rollout priorities.

“If they’re not prioritising it, they’ve got rocks in their heads because I can assure you having COVID in a prison facility is going to be like having a bomb go off,” Public Service Association of NSW general secretary Stewart Little told ABC radio on Monday.

“So there is a degree of anger out there that we don’t have the higher level of vaccination.”

He said the prison workforce must be given priority after many doses previously earmarked for them had been redirected to HSC students.

A total of 31 prisoners at privately run Parklea prison in Sydney’s north-west have tested positive in the past month.

It was placed in lockdown on Saturday after 12 inmates tested positive. MTC-Broadspectrum, which manages the prison, said the inmates were not new arrivals, were in isolation and were receiving treatment.

After members of the staff at Bathurst prison tested positive over the weekend, the facility was locked down and contact tracing investigations launched.

The Metropolitan Remand and Reception Centre, one of three facilities in the Silverwater prison complex, has an isolation hub which allows Corrective Services to manage COVID-19 cases in a central location.

The remand centre also has a temporary hospital to care for inmates “who become acutely unwell due to COVID-19”, according to the Department of Communities and Justice.

All inmates are tested when they arrive in custody and are managed in quarantine for 14 days before they are cleared to move into the general prison population.