Men’s tennis number one Novak Djokovic has been disqualified from the US Open after he accidentally hit a line judge with a ball.

The top seed had been bidding for his 18th Grand Slam win but his title hopes were dashed after he was defaulted from the fourth-round match against Pablo Carreno Busta.

Djokovic smacked a ball behind him in annoyance as he walked to the sideline after losing a game in the first set.

The ball hit a female line judge, who dropped to her knees at the back of the court and reached for her neck.

There were several minutes of discussion with officials on court – with Djokovic arguing his case – before it was announced he was out of the competition.

After the decision was made, the tennis star collected his rackets and walked off court.

It appeared Djokovic had not meant to hit the line judge and he quickly rushed over to check on her, but players have been disqualified in the past over similar incidents.

The tournament’s organisers have said Djokovic hit the ball “dangerously or recklessly” with “negligent disregard of the consequences”.

In a statement, US Open officials said he will lose all ranking points earned and will also be fined the prize money he has won.

Djokovic will face another fine for not doing a press conference, after he was seen getting into a car and leaving the site. 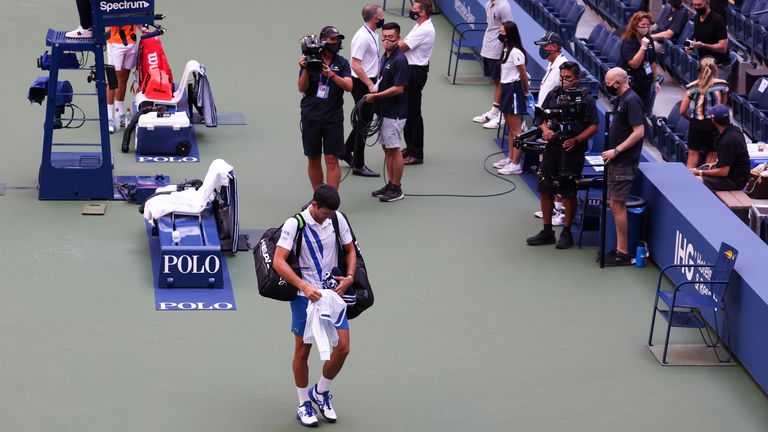 The Serbian player was the overwhelming favourite to win the title, having not lost a match all season.

His shock departure means there is no man remaining in the tournament who has previously won a Grand Slam singles title. 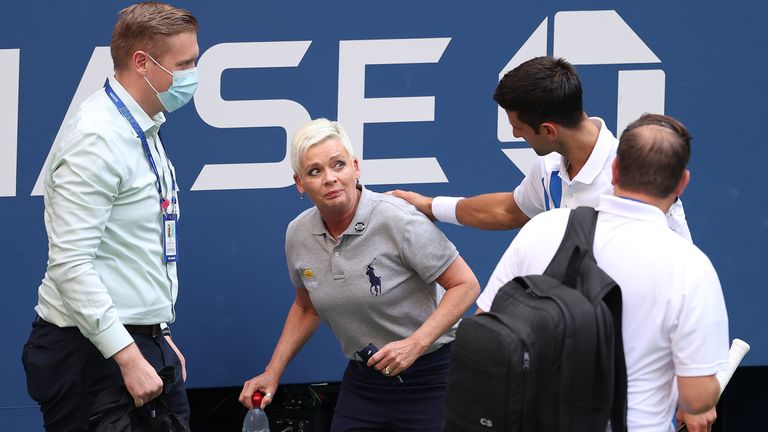 Tim Henman, who was disqualified from Wimbledon 25 years ago for accidentally hitting a ball girl with a ball during a doubles match, said there was “no doubt that it’s the right decision”.

Speaking on Amazon Prime, he said: “It’s amazing for me to talk about this because it happened to me at Wimbledon in 1995. It was that moment of frustration, hit the ball away when I wasn’t looking and I hit a ball girl in the ear.”

Djokovic has already courted controversy this year, after he revealed he was an anti-vaxxer and organised a controversial tennis tournament where players were seen not social distancing and dancing in nightclubs.

The world number one and several other players who took part in the tournament later tested positive for coronavirus.