BAGHDAD (Reuters) – Tens of thousands of Iraqis rallied in central Baghdad on Friday calling for the expulsion of U.S. troops, but the protest mostly dissipated after a few hours despite fears of violence following a cleric’s call for a “million strong” turnout.

Populist cleric Moqtada al-Sadr convened the march after the U.S. killing of an Iranian general and an Iraqi paramilitary chief in Baghdad this month. His eventual decision to hold it away from a separate anti-government protest camp, and away from the U.S. embassy, looked pivotal in keeping the march peaceful.

“We want them all out – America, Israel, and the corrupt politicians in government,” said Raed Abu Zahra, a health worker from southern Samawa, who had come by bus to Baghdad and stayed in Sadr City, a sprawling district controlled by Sadr’s followers.

“We support the anti-government protests in Tahrir Square as well, but understand why Sadr held this protest here so it doesn’t take attention from theirs,” he added.

The protests have shattered nearly two years of relative calm following the 2017 defeat of Islamic State and threaten to send the country back into major civil strife.

Unrest erupted in October with protests against a corrupt ruling elite, including Iran-backed politicians, that have met deadly force from government security forces and pro-Iran paramilitaries that dominate the state.

It has temporarily united rival Shi’ite groups in opposition to the presence of U.S. troops – a rallying cry that critics say aims simply to refocus the street and kill the momentum of the anti-establishment protests that challenge their grip on power.

Sadr, who commands a following of millions in vast Baghdad slums, opposes all foreign interference in Iraq but has recently aligned himself more closely with Iran, whose allies have dominated state institutions since a 2003 U.S.-led invasion.

Sadr supported anti-government protests when they began in October, but did not publicly urge his followers to join them. 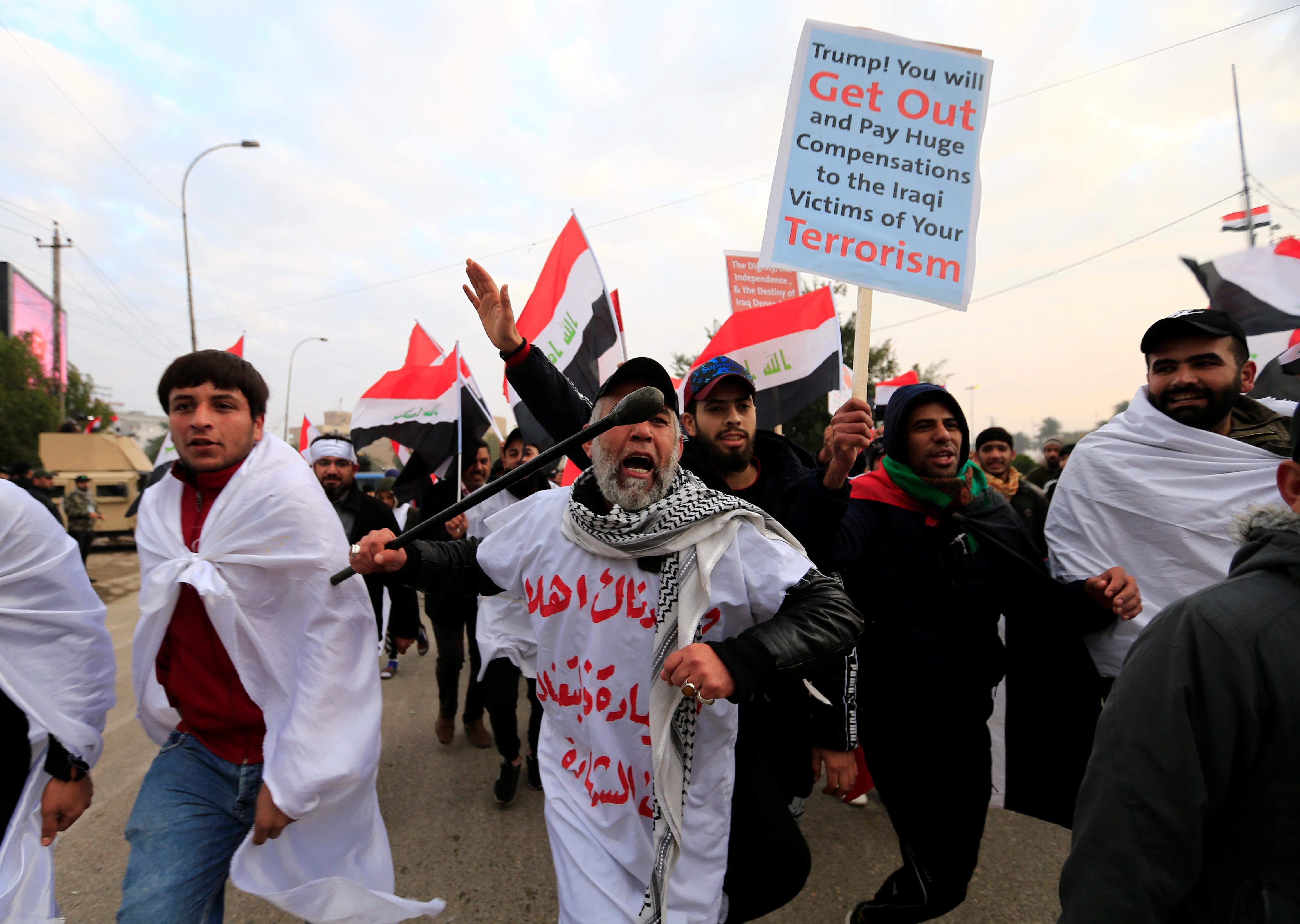 The demonstrations have since taken aim at all groups and figures that are part of the post-2003 system including Sadr, who although often considered an outsider is part of that system, commanding one of the two largest blocs in parliament.

Parliament urged the government to eject U.S. troops after the killing of Soleimani, but Sunni and Kurdish politicians boycotted the session, the first time lawmakers have voted along ethnic and sectarian lines since the defeat of IS.

Sunnis and Kurds generally oppose the withdrawal of U.S. troops, seeing them as crucial in fighting against IS remnants and a buffer against dominance of Iran.

“DO NOT CROSS THIS BARRIER”

U.S.-Iran tension playing out on Iraqi soil has further fractured Iraqi politics and distracted leaders from forming a new government.

Iraq’s top Shi’ite Muslim cleric, Grand Ayatollah Ali al-Sistani, called in his weekly sermon for political groups to form a government as soon as possible to bring stability to the country and enact reforms to improve Iraqis’ lives.

“Iraq’s sovereignty must be respected … and citizens should have the right to peaceful protest,” said the cleric, who comments on politics only in times of crisis and wields great influence over Iraq’s Shi’ite majority.

Iraqi President Barham Salih posted a photo of Friday’s march on Twitter and wrote that Iraqis deserved a “fully sovereign state that serves its people.”

Under the government of caretaker Prime Minister Adel Abdul Mahdi, who said he would quit in November, security forces and unidentified gunmen believed to be linked to powerful Iran-backed militias killed nearly 450 anti-establishment protesters.

Marchers on Friday wore Iraqi flags and symbolic white robes indicating they were willing to die for Iraq while others sat looking out over the square from half finished buildings, holding signs reading “No America, no Israel, no colonialists”. 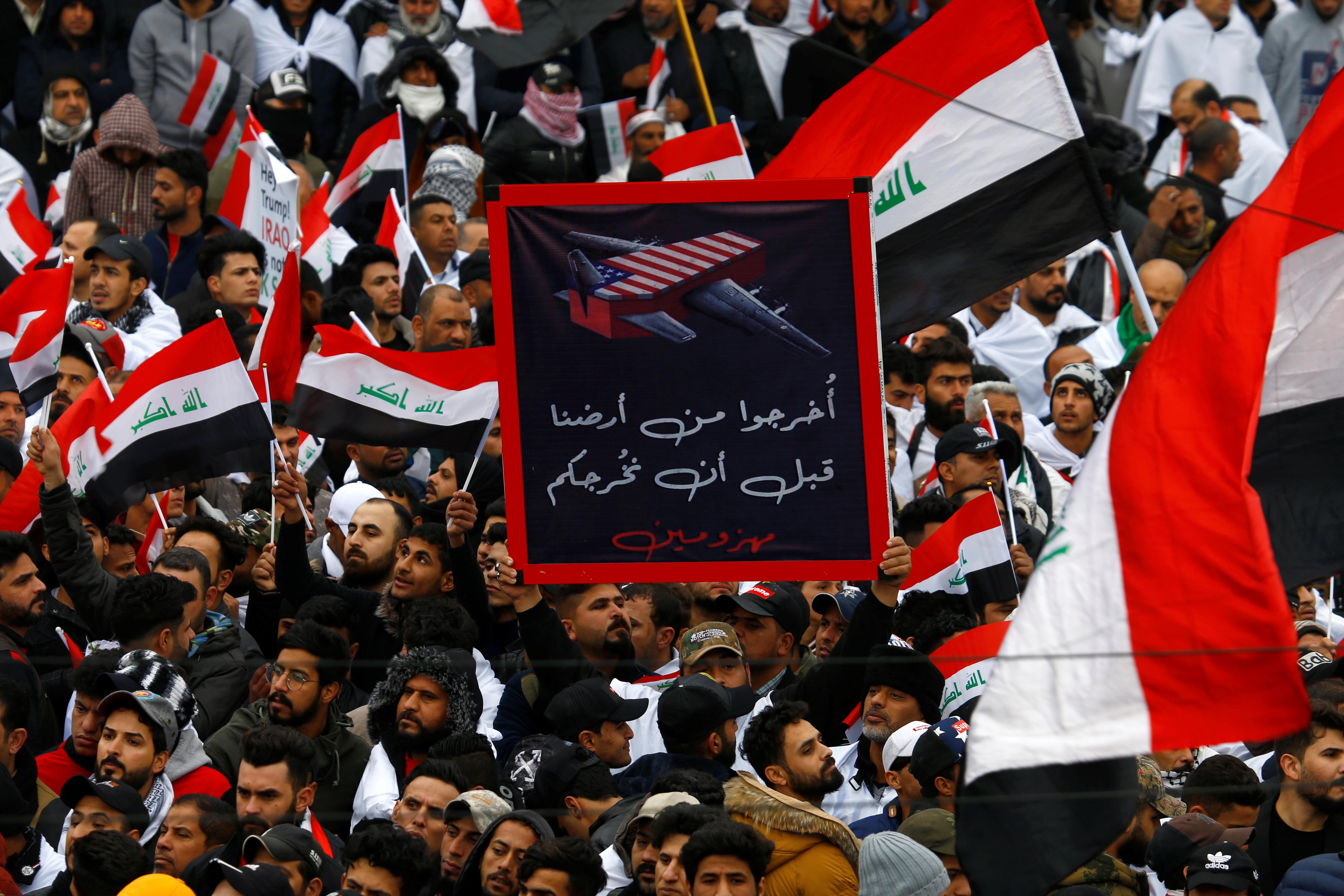 The march did not head as initially feared towards U.S. Embassy, the scene of violent clashes last month when militia supporters tried to storm the compound.

Many marchers boarded buses in the early afternoon to head home. A smaller number shuffled along towards Tahrir Square.

Outside the U.S. embassy in Baghdad’s fortified Green Zone, a sign read “Warning. Do not cross this barrier, we will use pre-emptive measures against any attempt to cross”.