Nicola Sturgeon appeared to hint she might not call for a second independence referendum this autumn, despite insisting the case for leaving the UK was ‘getting stronger by the day’.

The First Minister is committed to updating Scots about when she might seek to have such a vote later this year, when more details about Brexit are known.

But she complained the UK Government had been left ‘paralysed’ on the issue. 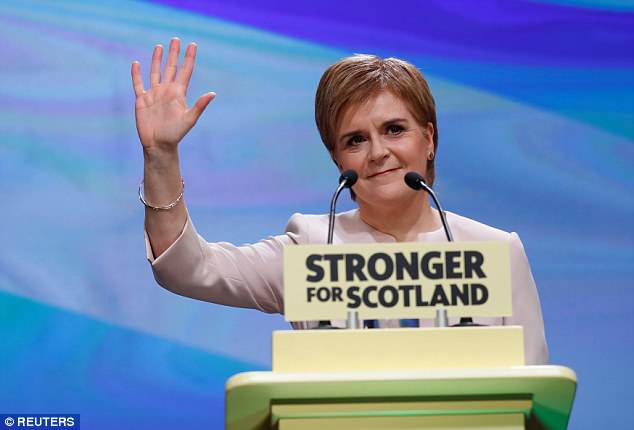 She went on to tell the SNP conference in Aberdeen that persuading more Scots of the case for independence was still more important than the timing of a second ballot.

Ms Sturgeon said: ‘As we wait for the fog of Brexit to clear, our opportunity – indeed, our responsibility – is this.

‘Not just to focus on the “when” of independence. But to use our energy and passion to persuade those who still ask “why?” Right now, that is the more important task.’

Ms Sturgeon had previously called for a second independence referendum to be held in the wake of the Brexit vote, which saw almost two thirds of people north of the border vote to stay part of the European Union.

But she pulled back from that after last year’s snap general election, which saw the SNP lose 21 of the seats it had won in Westminster just two years before.

Her comments on a possible referendum came in a speech which included announcements of more support for students and a 3 per cent pay rise for NHS workers – which Ms Sturgeon said would leave employees in Scotland better off than their colleagues south of the border. 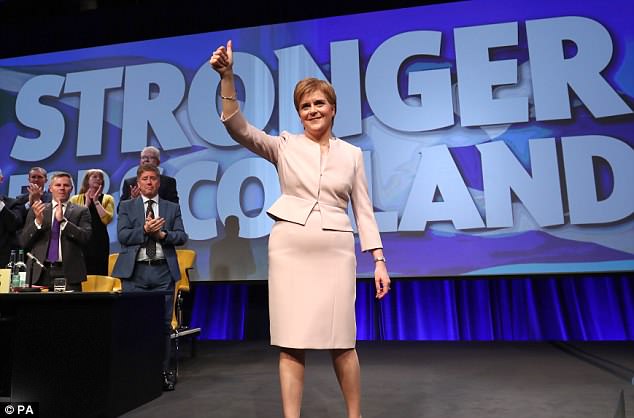 From July, all staff working under the NHS Agenda for Change who earn up to £80,000 will receive the wage increase.

The rise was announced while a three-year pay deal for health staff is still being negotiated, but Ms Sturgeon said she did not want to wait till those talks were done to act.

As a result she said a nurse with five years’ experience in Band 5 would be £430 better off, a healthcare assistance at the top of Band 3 would receive £630 more than someone of the same level in England, and an auxiliary nurse with just one year’s experience could earn more than £830 more by working in NHS Scotland.

‘This is a £160 million investment in those who care for us,’ Ms Sturgeon said.

‘And as our precious NHS reaches its 70th birthday it comes with our grateful thanks for all that they do.’

To help students, she pledged £16 million will be invested next year in increasing college bursaries and university grants for those from poorer families.

In addition, the Scottish Government is to raise the threshold at which graduates start repaying student loans, from the current rate of just over £18,000 to £25,000 by April 2021. 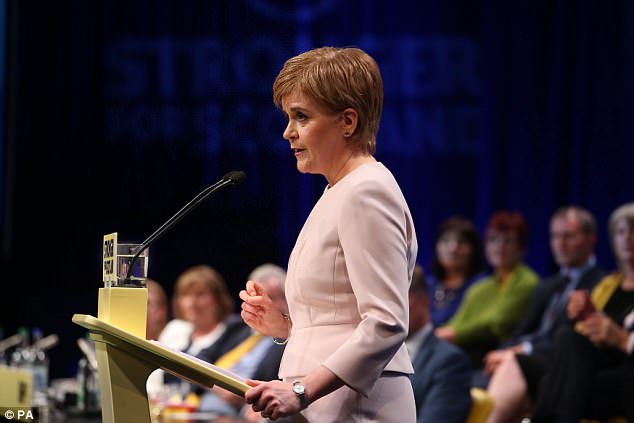 Despite the extra cash she announced, the First Minister said Westminster was ‘dragging Scotland back’

Grants to young people who have been in care who go on to college or university are also being upped, with Ms Sturgeon saying an investment of more than £5 million this year would see these students receive £8,100.

While she said Westminster was ‘dragging Scotland back’, she hailed these changes as ‘creating a fairer nation’.

With the Scottish Government having already pledged to almost double free early years education to 1,140 hours by the end of this Parliament, she spoke out about how this policy would not only help families but give the country an ‘economic boost’ too.

Around 750 nurseries in Scotland will be either built, expanded or refurbished by the end of the Parliament, Ms Sturgeon announced – describing this as a ‘huge national construction programme to give our children the very best start in life’.

She hit out at the UK Government, blasting its ‘anti-migrant obsession’ and also attacking ‘Westminister austerity’.

With the EU Withdrawal Bill heading back to the House of Commons on Tuesday, she also said it was ‘decision time for the Tories’ in the row over devolved powers.

Ms Sturgeon argued that the Bill as its stands is ‘completely unacceptable’ as it allows ‘UK ministers to remove Scotland’s powers for up to seven years’.

The First Minister stated: ‘Next week the prevaricating comes to an end. It is decision time for the Tories.

‘They can choose to respect devolution, or they can prove what many in Scotland have long believed: the Tories cannot be trusted with the Scottish Parliament – not now, not ever.’