Alexei Navalny is facing fresh prosecution for directing an ‘extremist’ network aimed at undermining the Russian constitution as the Kremlin turns the screw on the jailed dissident.

The 45-year-old Vladimir Putin critic is already serving two-and-a-half years on trumped up charges of ‘parole violations’ which have torpedoed his political ambitions.

The Investigative Committee, which probes major crimes in Russia, said in a statement that by 2014 Navalny had ‘created an extremist network and directed it’ with the aim of ‘changing the foundations of the constitutional system in the Russian Federation’.

Investigators accuse Navalny and his top allies, including Leonid Volkov and Ivan Zhdanov, of setting up a number of social media accounts and the website of Navalny’s banned Anti-Corruption Foundation (FBK) ‘in order to promote criminal activity.’ 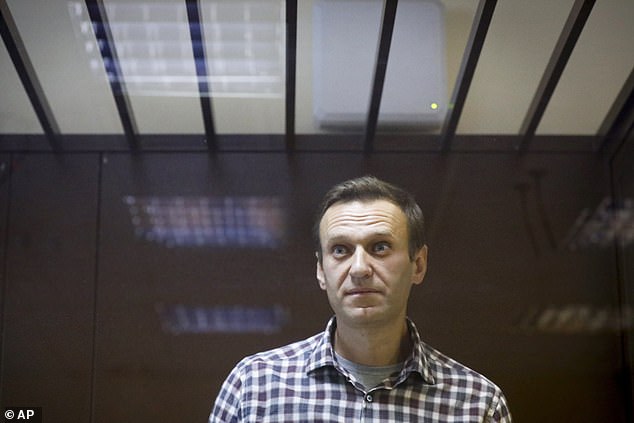 Russian opposition leader Alexei Navalny stands in the dock at the Babuskinsky District Court in Moscow on February 2021. The 45-year-old Vladimir Putin critic is already serving two-and-a-half years on trumped up charges for ‘parole violations’ which have torpedoed his political ambitions. 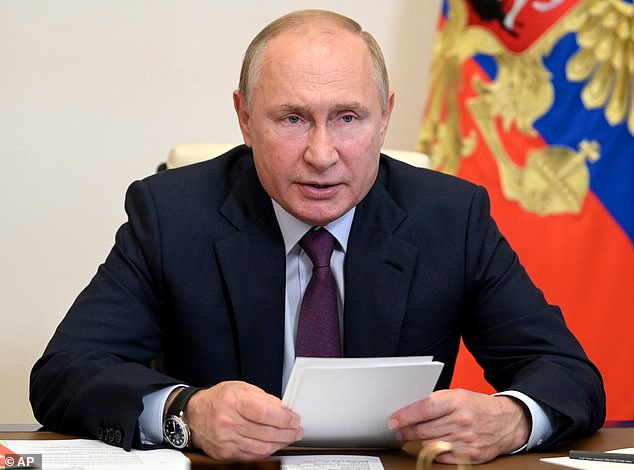 Putin and the Kremlin do not tolerate political opposition. The West views the Russian state as responsible for Navalny’s nerve agent poisoning last year

‘The illegal activities of the extremist network were aimed at discrediting state authorities and their policies,’ investigators said.

The activities were also aimed at ‘destabilising the situation in the regions’, they added, and ‘shaping public opinion about the need for a violent change of power’.

Investigators also said calls for ‘extremist and terrorist activities’ were common at regular street protests organised by Navalny and his allies.

Zhdanov, who headed the FBK before it disbanded, described the retroactive case covering ‘all of our past activities’ as ‘complete insanity’ and ‘lawlessness’ in a post on Instagram.

If convicted, Navalny, Volkov and Zhdanov could face six to 10 years in prison, while Lyubov Sobol and the other activists risk two to six years behind bars.

‘This is the answer to the question of who Putin fears and who he considers his greatest enemy,’ Sobol tweeted.

‘Freedom for Navalny and Russia!’

Navalny, Putin’s most vocal domestic critic, was detained in January after returning to Russia from Germany where he was recovering from a Novichok attack he blames on the Kremlin.

Moscow rejected the allegations and the experts’ findings – which prompted a fresh wave of sanctions against Russia – and accused the West of a smear campaign against it.

Navalny was sentenced to two-and-a-half years in a penal colony in February and saw his nationwide network of political offices and FBK declared ‘extremist’ and banned in June.

In recent months, the opposition leader and his allies have become targets of numerous probes that they and their supporters describe as the Kremlin’s revenge for challenging Putin’s two-decade-long rule.

Most of his top allies, including Volkov and Zhdanov, have fled the country. 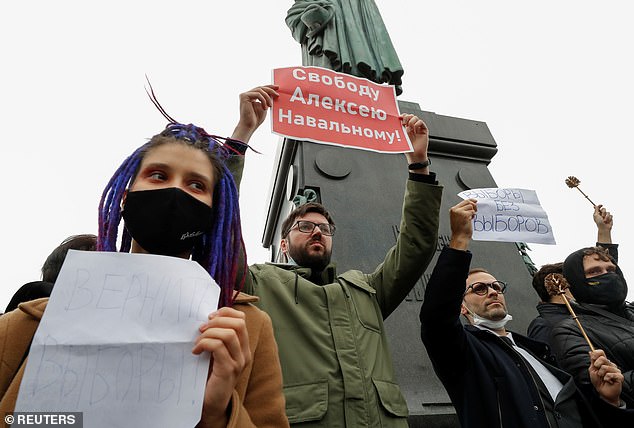 Participants hold placards and toilet brushes during an opposition rally to protest against the results of a parliamentary election in Moscow, Russia on September 25. A placard refers to jailed Kremlin critic Alexei Navalny and reads: ‘Freedom to Alexei Navalny’ 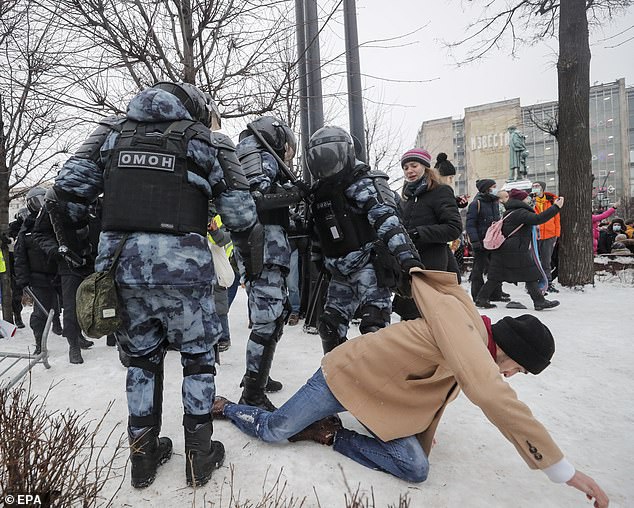 Russian special police units detain a protester during an unauthorised protest in support of Russian opposition leader and blogger Alexei Navalny, in Moscow, on January 23

Anyone associated with Navalny’s banned groups was kept from running in the elections, while his allies called for opposition supporters to back other candidates who could potentially defeat United Russia.

Russia’s opposition accused the authorities of mass voter fraud in the election and in a message from prison last week Navalny said the polls had been ‘stolen’.

He also called on his supporters to keep up the fight.

‘We have one country no matter where we live,’ he wrote on his Instagram account, which is being run by his team.

‘The fight for it is not a sprint but a long and hard marathon.’