A day after meeting with Morrison at the US Capitol, Pelosi, widely described as the most powerful woman in US political history, singled out Australia for praise while discussing climate change at a briefing with US congressional reporters. 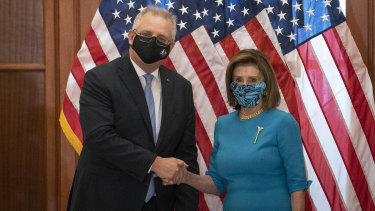 “The Prime Minister of Australia, Morrison, he was saying, ‘We’re not only addressing the Paris Accords – our slogan is we meet it and we beat it’,” Pelosi said.

Pelosi’s praise defies any expectations that Morrison would face public criticism from Democrats for failing to set sufficiently ambitious climate targets during his trip to the United States.

At the previous day’s meeting, Pelosi mentioned climate change and told Morrison “thank you for your leadership in that regard”.

In the lead up to US President Joe Biden’s climate summit in April, the Biden administration described Australia’s current climate targets as “insufficient” and said they wanted to see more ambition from the Morrison government.

In a marked contrast to his 2019 visit to Washington, Morrison has sought to foreground climate change in his public remarks. The Prime Minister is aware that, unlike for previous president Donald Trump, the issue is a top priority for Biden and congressional Democrats.

Before his meeting with Biden this week, Morrison said the US and Australia were working together to address the “global challenges of climate change” and “a new energy economy”.

Biden said the two nations were working in “lockstep” on a range of issues including “addressing the climate crisis”.

The Biden administration has pledged to slash US greenhouse gas emissions by 50 per cent by 2030 based on 2005 levels, almost double Australia’s current pledge of a 26-28 per cent reduction over the same timeframe.

Treasurer Josh Frydenberg will on Friday back the case to cut greenhouse gas emissions to net zero by 2050 and warn that Australia cannot be left behind in the global shift to green energy.

“Markets are moving as governments, regulators, central banks and investors are preparing for a lower emissions future,” Frydenberg will say in a speech.

“Australia has a lot at stake. We cannot run the risk that markets falsely assume we are not transitioning in line with the rest of the world.”

In a briefing in April a senior Biden administration official said: “At the moment I think our colleagues in Australia recognise there is going to have to be a shift [on climate change].

“It’s insufficient to follow the existing trajectory and hope that they will be on a course to deep decarbonisation and getting to net zero emissions by mid-century.”