MONTREAL (NYTIMES) – Forty-eight people from the same small Canadian province struck with a baffling mix of symptoms including insomnia, impaired motor function and hallucinations such as nightmarish visions of the dead.

A quixotic neurologist working 12-hour days to decipher the clues.

These are just some plot lines of a mystery that has stumped Canada’s medical establishment, attracted the attention of some of the world’s top neurologists and fanned fears among residents of New Brunswick, a picturesque province of about 770,000 on Canada’s Atlantic coast.

In the past six years, dozens of people have fallen ill from the disease and six people have died.

“People are alarmed,” said Ms Yvon Godin, the mayor of Bertrand, a village in the Acadian Peninsula in north-eastern New Brunswick where residents have been afflicted. “They are asking, ‘Is it environmental? Is it genetic? Is it fish or deer meat? Is it something else?’ Everyone wants answers.”

As the coronavirus raged across the country the past 15 months, the medical enigma was initially slow to gain national attention. Canadian health authorities, distracted by the need to respond to the pandemic, scrambled to determine the seriousness of the outbreak, which was only publicly exposed after a memo about it by New Brunswick’s chief medical officer was leaked to the press in March.

Doctors investigating the disease say the sluggish response underlines the challenge for other medical conditions to compete for the spotlight during a global pandemic.

Medical experts said the murkiness surrounding the illness also reflected how, despite extraordinary advances in medical science, some conditions, in particular neurological diseases involving dementia, can puzzle even the world’s best scientific brains.

The Canadian outbreak could join the pantheon of other ailments that have mystified the world, such as the debilitating illness that impaired dozens of diplomats in Cuba and China beginning in 2016, prompting suspicions that victims may have been targeted by Moscow, Beijing or a rogue government.

There was also a painful and puzzling kidney disease that afflicted workers harvesting sugar cane in Nicaragua four years earlier.

The mystery, however, could also fizzle, if it turns out that a variety of pre-existing conditions have been prematurely ascribed to a strange new disease.

Among the youngest victims of the Canadian syndrome is Ms Gabrielle Cormier, 20, once a straight-A student who participated in figure skating competitions and aspired to become a pathologist.

But as she began university two years ago, Ms Cormier said she was suddenly and inexplicably overcome by fatigue, started bumping into things and had visions that looked like static from a television. No longer able to read easily or walk to class, she was forced to drop out of school.

Not understanding what was wrong amplified the illness’s horror. After being misdiagnosed with mononucleosis, Ms Cormier said emergency room doctors then told her there was nothing wrong with her.

A battery of tests yielded no diagnosis. She was eventually referred to a neurologist as her health deteriorated and she experienced involuntary jerking movements, memory lapses and hallucinations. She was among the first to be included in the cluster of those suffering from the unidentified syndrome.

Today, she lives at home in Dalhousie Junction, in rural northern New Brunswick, and walks with a cane. “I was just starting what is supposed to be the best chapter of your life and then it disappeared,” she said. “I don’t know if I will die or live out the rest of my life with these symptoms.”

Dr Neil Cashman, a neurologist at the University of British Columbia in Vancouver, who is investigating the illness, said it was a medical whodunit of the type seen only a couple of times a century.

“From the standpoint of a mystery, there is usually something horrible, like a murder. In this case, it is rapidly progressive dementia and psychiatric manifestations, losing everything at once that is controlled by the brain and the spinal cord,” he said. “It is terrifying.”

But other medical experts questioned the condition’s novelty.

Dr Michael Geschwind, a professor of neurology at the University of California, San Francisco, who is one of the world’s leading experts on rare neurological outbreaks, has not studied the cases or autopsies of those affected. But he cautioned that what can seem like a new illness sometimes turns out to be a known disease that has not been diagnosed. Those affected, he added, could end up suffering from a “grab bag” of disparate neurodegenerative diseases that were being linked together.

“Sometimes what seems to be a cluster turns out to be something else,” he said.

The disease was first observed in 2015 when a New Brunswick neurologist, Dr Alier Marrero, saw a patient who presented a bizarre mix of symptoms including anxiety, depression, rapidly progressive dementia, muscle pains and frightening visual disturbances. 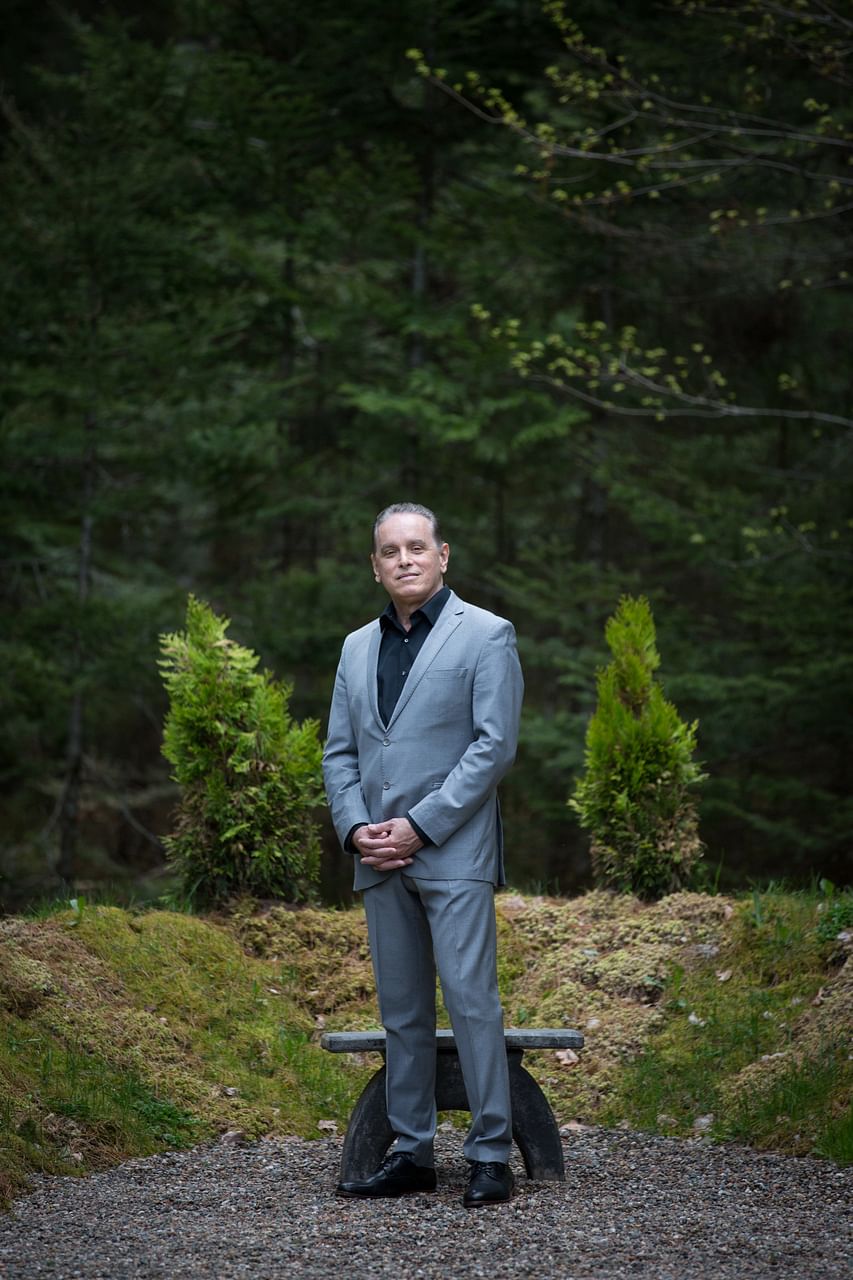 The patients range in age from 18 to 84 and live primarily in two areas of New Brunswick: Moncton and the Acadian Peninsula.

Mr Marrero said the tests revealed abnormalities, such as brain atrophy and neurological dysfunction, but none of the results linked together to form a clear diagnosis.

He initially suspected Creutzfeldt-Jakob disease (CJD), a rapidly progressive neurodegenerative disease that is thought to be caused by prions, novel infectious agents that damage the brain. But the patients tested negative for known forms of CJD.

He scoured medical texts. He consulted with colleagues across the world. Eventually, he said, only one conclusion made sense: “It was not something we have seen before.”

With no diagnosis, he gave the devastating disease a decidedly prosaic working name: Neurological Syndrome of Unknown Etiology in New Brunswick. He also sounded the alarm, notifying colleagues and federal and provincial health authorities.

In April, six years after the first cases emerged, the health authorities in New Brunswick and Ottawa, Canada’s capital, assembled a team of neurologists, public health researchers, environmentalists and veterinarians to investigate.

Brain autopsies of the six victims are being analysed at a federal laboratory in Ottawa, while a team of neurologists and pathologists from across Canada is reviewing the evidence.

Of the three autopsies done so far, all have been negative for known forms of prion disease, according to Dr Michael Coulthart, a neurologist who is leading the investigation.

Medical investigators said the list of potential causes had been winnowed down to four or five.

Dr Cashman, the University of British Columbia neurologist, said one line of inquiry was that the disease could be caused by a toxin known as beta-methylamino-L-alanine, or BMAA, which is produced by blue-green algae and has been linked to diseases like Parkinson’s and Alzheimer’s.

Another potential culprit, he said, is chronic exposure to Domoic acid, a neurotoxin found in shellfish off the coast of New Brunswick.

He said the team was not ruling out that it could be a new prion disease or a syndrome caused by an infectious agent such as bacteria, a virus or a fungus.

Some families of those suffering from the symptoms are angry that the health authorities took so long to reveal them.

Mr Steven Ellis, whose father, Roger, is part of the New Brunswick outbreak, said his family wanted to know whether the condition was genetic or caused by an external factor. Once jovial and active, his father is now confined to a nursing home and has suffered weight loss, irritability and delusions.

Only after reading the leaked New Brunswick public health officer’s internal memo about the syndrome in March did Mr Ellis connect it to his father’s illness.

“It was like reading our private family story,” he recalled. “The pandemic overshadowed this disease. Why did it take so long for this to become public?”

Dr Jennifer Russell, New Brunswick’s chief medical officer, told a news conference in April that the provincial health authorities had prudently reacted once federal health officials determined that the number of cases was significant. There is a “long road ahead” to determine the cause, she said.

But Mr Ellis said families like his were running out of time.

“If my dad had terminal cancer, of course it would be upsetting, but at least there would be a prognosis,” he said. “We are watching him dying a slow death, and nobody can tell us why.”

More on this topic

Join ST’s Telegram channel here and get the latest breaking news delivered to you.