Seattle: Four people were killed when a construction crane fell from the top of a building that was to be Google's Seattle campus and crushed six vehicles on the street below.

Seattle fire chief Harold Scoggins said two of the four people killed were crane operators and that the other two had been in separate vehicles. Four other people had non-life-threatening injuries, the Fire Department said. 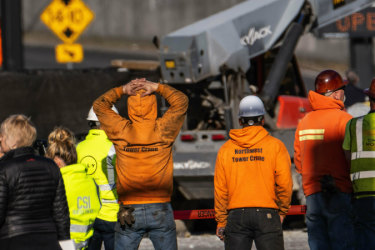 Police investigate the scene of a construction crane collapse in Seattle that left four dead.Credit:AP

A piece of the yellow crane was slashed across a seven-lane road on Saturday afternoon. At least one crushed car was still beneath the wreckage.

Ceara Nicosia, who works for a biotechnology company with offices across the street, heard a rumble that she thought was an earthquake, and then a crash. She looked out a window to see a giant cloud of dust.

It was not immediately clear what caused the crane to fall from the building, which is about six stories high. Construction on the site, which is being developed by Seattle-based Vulcan Inc, is still proceeding.

"My heart breaks for the families who have lost someone today and the workers who have lost fellow workers," Jenny Durkan, the mayor of Seattle, said. "Determining exactly how and why this happened is going to take a significant amount of time."

Once home to the city's logging and maritime industries, the South Lake Union neighborhood has grown substantially in the past 15 years. Many technology companies and research laboratories are there, along with restaurants and residential buildings.

Google said the site was slated to become the company's Seattle campus, but it had not yet moved in.

Vulcan, which was established by Paul Allen, the co-founder of Microsoft, said contractors working on the site were co-operating with authorities.