He was practically giggling at the thought of the second-half comeback that he envisioned the Jayhawks staging.

“Why are you smiling dude?” teammate Christian Braun asked. “We’re down 15!”

“Keep your head up, we’ll be alright,” Braun said McCormack told him.

The biggest comeback in national title game history started with the irrepressible confidence of the team who completed it. Kansas erased North Carolina’s 15-point halftime lead and rallied for a championship-clinching 72-69 victory mostly because the Jayhawks’ journey to this point has instilled the belief that they can do the improbable.

This is a team that lost by 34 to USC in the second round of last year’s NCAA tournament. This is a team whose own coach questioned afterward if they were athletic enough to be a legitimate national contender. So after the same core of players responded to that by getting to the cusp of Bill Self’s long-awaited second championship, the Jayhawks weren’t about to let one error-plagued half derail them.

In Kansas’ halftime locker room, Self tried to calm the Jayhawks by reminding them there was a lot of time left to chip away. As evidence, he cited the title game deficit his 2008 team faced against Memphis before storming back force overtime on “Mario’s Miracle.”

“Which would be harder,” Self said, “Being down nine with two minutes left or being down 15 with 20 minutes left?” 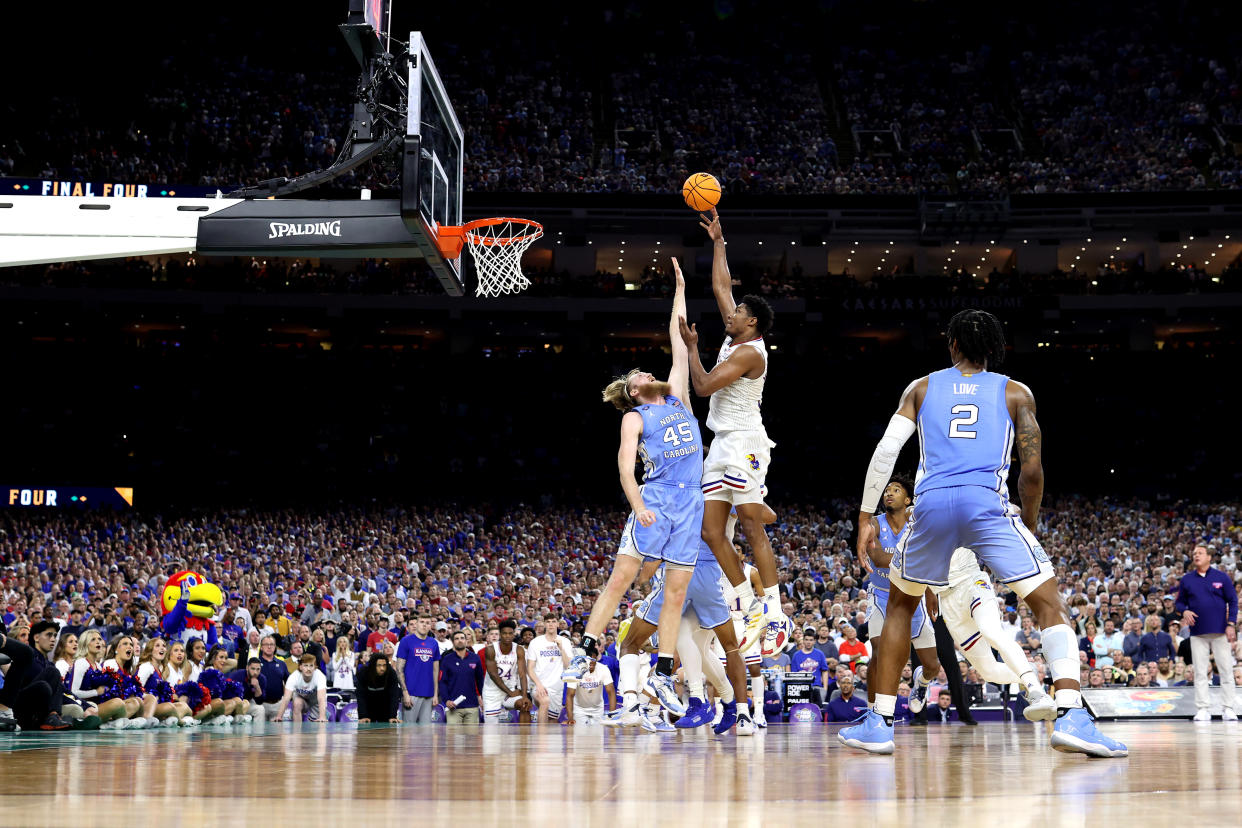 When his players responded that being down nine with two minutes left was harder, Self told them, “See, we can do this!”

Infusing confidence in his shaken team was essential, but Self also knew that Kansas couldn’t win without making some tactical changes. The Jayhawks had scored only 18 points in the final 18:30 of a first half rife with overanxious shots, errant passes and defensive breakdowns.

Despite playing essentially on one leg due to a badly sprained right ankle, North Carolina center Armando Bacot was walling off the paint and giving up nothing easy at the rim. Ochai Agbaji wasn’t getting any clean looks at threes with Leaky Black draped all over him, and Kansas’ other perimeter snipers were misfiring.

To help his offense, Self pleaded with his team for more energy on defense. If the Jayhawks could string together a few stops, Self figured they could unleash one of the nation’s best transition attacks and generate some easy baskets before the defense was set.

In the first eight minutes of the second half, Kansas defended like it was shot out of a cannon, limiting North Carolina to only two field goals and turning Tar Heels’ turnovers and misses into fast-break points. By the time Braun punctuated a transition layup by bellowing “Let’s go” to a section of Kansas fans, the Jayhawks had sliced their halftime deficit to one.

“When we saw our own blood, we didn’t panic and we came out hot in the second half,” Self said. “I was thinking about the 14-minute mark, there’s no way these guys can keep playing defense like that, but they did.”

There were times that Kansas had to attack a set North Carolina defense, but Self devised a plan for those situations too. Rather than pounding the ball inside to McCormack like he had in the first half, Self pulled his center away from the rim to force the gimpy Bacot out of the paint.

On one set play, Self inverted the offense and had Braun post-up the smaller Love for an easy basket. On others, Self used ball screens to exploit Bacot’s lack of mobility. The first time, Bacot was slow to get back to his man and surrendered a McCormack alley-oop slam. The next two times, Bacot was too worried about McCormack and allowed Kansas’ guards to turn the corner.

When Bacot reinjured his ankle with 38 seconds to go and Kansas leading by one, Self ruthlessly took advantage. Knowing that North Carolina now did not have a true center to guard McCormack, Self called a play designed to get him a deep post-up and the Kansas big man converted it over Brady Manek.

“Coach called the play and said we’re going to have faith in you to deliver and get us a basket,” McCormack said. “I appreciate them allowing me to have that opportunity.” 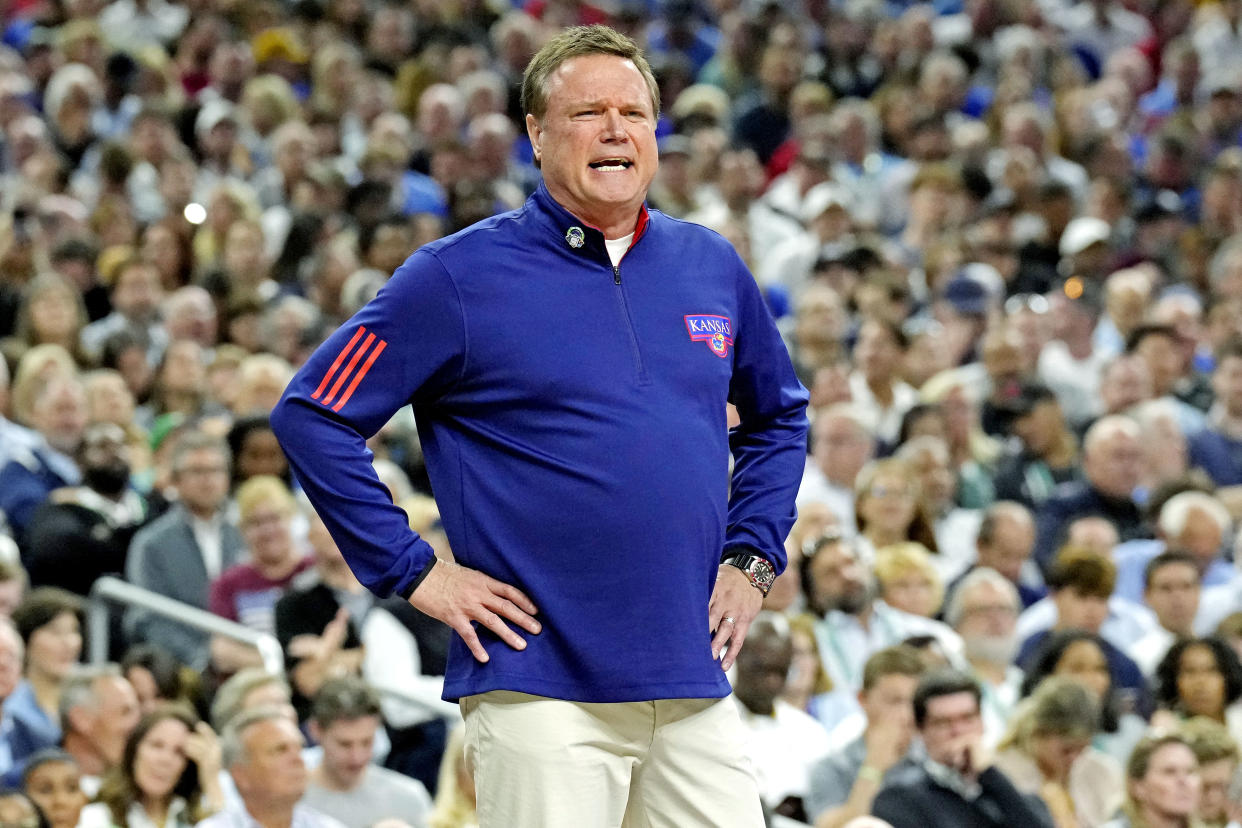 North Carolina had three chances to tie the game with a 3-pointer in the final 20 seconds, but the Tar Heels failed to convert any of them. Fittingly, the last miss came from Caleb Love, the ever-confident hero of North Carolina’s semifinal win over Duke. On Monday night, he ran out of late-game magic and finished 5 of 24 from the field.

The Tar Heels displayed the same championship resolve that they had throughout their run from the NCAA tournament bubble to the title game, but during Monday’s second half their battered bodies betrayed them. Love twisted an ankle but played through it. Puff Johnson vomited on the court after taking a blow to the stomach. At one point after reinjuring his ankle, Bacot hopped three-quarters of the way down court on his left foot trying to get back on defense.

“I was trying to get back to do whatever I could, even if I was just contesting a shot,” Bacot said. “But I really struggled. I really couldn't put any weight down on my right leg.”

When it was over, when Love’s last-gasp 3-point attempt fell short, Self raised both arms in the air in celebration of a long-awaited title. The perpetually star-crossed Jayhawks have been a No. 1 seed but fallen short six times since 2008 and also would have been the No. 1 overall seed in 2020 had the NCAA tournament not been canceled.

That this year’s team was the one to end Self’s drought is a surprise. These Jayhawks spent the entire season in the AP Top 10 yet often took a back seat to the likes of Gonzaga, Kentucky, Baylor and Arizona among title contenders.

The spark that ignited Kansas’ title run was the humiliation of how its previous season ended. A year ago, the Jayhawks crashed out of the opening weekend of the NCAA tournament with an 85-51 loss to a longer, more athletic USC team.

Inside a somber, tear-stained Kansas locker room that night, Agbaji addressed the players who intended to return the following season. He told them to “remember how this feels and use that to fuel your fire going into next year.”

If the scoreboard served as motivation for Kansas players, so did their coach’s candor speaking to reporters afterward. Self cited Kansas’ lack of margin for error three times and said, “For us to be a team that really has a chance to be a national contender, we need to get a little bit more athletic. We need to get a little longer and bigger.” 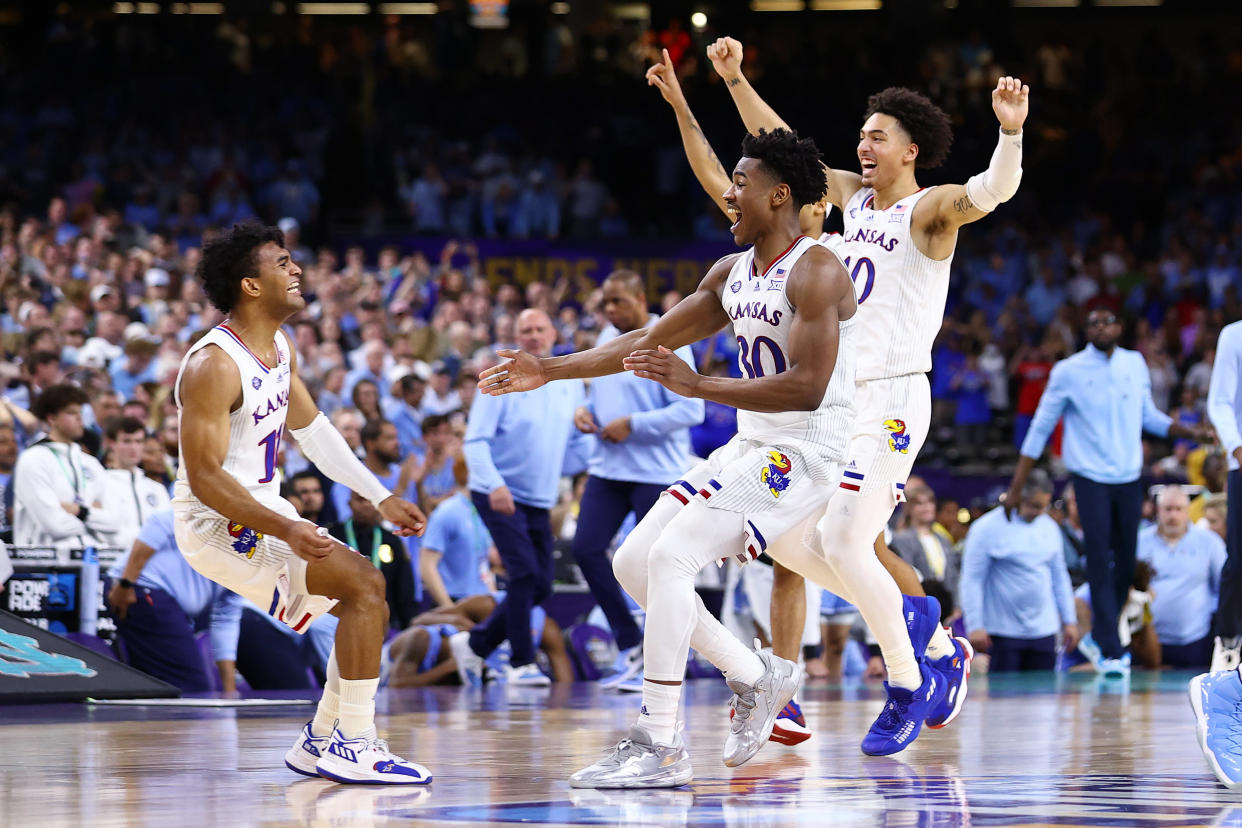 While Self went shopping for new talent via the transfer portal, he left strength coach Ramsey Nijem in charge of transforming his returning core. Last April, when Kansas players came back from a brief postseason break, they found that Nijem had written “85-51” on a whiteboard in the weight room.

Over the next six months, Braun put on muscle. Jalen Wilson became more explosive. Agbaji improved his handle and extended his shooting range. Anytime they got tired, memories of the USC loss fueled them. Anytime they wanted to quit, Self’s words rang in their ears.

Six of Kansas’ top seven players this season played in the USC loss. Speedy guard Remy Martin is the only newcomer who has played substantial minutes. And yet the Jayhawks matured into the national contender they weren’t a year ago, buckling down on defense late in the season, sweeping the Big 12 regular season and tournament titles, and capitalizing on a favorable NCAA tournament path.

On the eve of Monday’s title game, Self credited his returning players for how hard they worked to get better.

The confidence and chemistry created by such a journey helped Kansas on Monday night as much as any words of encouragement from Self did.

This wasn’t Self’s best team since 2008. Nor was it his most talented.

But as he said Monday night, “I’ve never felt more connected to a group than I have this year.”