A MUM has warned other parents to watch out after doctors discovered that her toddlers constipation was actually a fast-growing tumour.

Sophie Potter spotted a hard patch in her daughter's stomach and was advised by medical professionals that it was nothing serious. 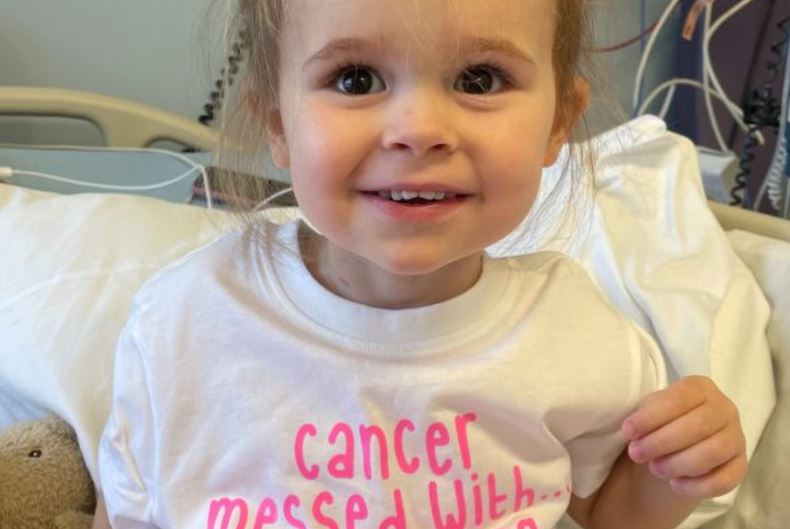 But after contacting her doctor again Sophie, 24, was advised to take her daughter to the hospital to undergo scans in August.

Little Florence, 2, from Hinkley, Leics, was diagnosed with a cancerous tumour in her stomach after undergoing the tests in September.

Both Sophie and Florence have spent the last month at Leicester Royal Infirmary where the tot ahs been undergoing chemotherapy and other tests.

Sophie told LeicestershireLive: "Doctors and my friends all said it was probably constipation but it didn't seem to get better so we were advised to go to the paediatric A&E department at Leicester Royal Infirmary.

"Over just 10 days the tumour grew from about 12cm to about 17cm – I could feel it growing in her tummy.

"I want other parents to know that this can happen – it's such a fast-growing cancer. It's terrifying."

She went on to say that she struggle to cope with the news when doctors first told her that her daughter had cancer.

Sophie added: "When they told me I just broke down crying. I couldn't take it in so I asked the consultant to talk to my mum about it – I couldn't talk.

"Florence is petrified. She's been hiding under her covers in the bed in hospital, not wanting to know anyone.

"It's changed our lives completely – she had nursery, her music classes and swimming and had been about to start dance classes.

"And we were always out and about, going to the park to feed the ducks and things like that.

"But we've been isolated in a ward for the past four weeks. We got to go home for just one night during that time.

I want other parents to know that this can happen – it's such a fast-growing cancer. It's terrifying

"She's been having lots of tests – they still don't know for sure what the tumour is attached to and where it's growing from.

"She's about to start her second course of chemo and the chemo will continue for at least eight months.

"Hopefully by then they will be able to remove it with surgery or lasers.

"It's already shrunk a bit. But even if it goes it will always be a worry that one day it will come back again."

Keen swimmer Florence will be unable to splash about in the water or enjoy a bath  because she has a Hickman line going into her chest for the drugs during her chemotherapy.

Sophie has set up a GoFundMe page to raise £5,000 to buy Florence a water-tight drysuit so she can enjoy water again.