Vicki Sutton, 39 and partner Neil Mullin, 50, say they were told by doctors that their daughter Mya, five, was lucky to be alive after the incident in Gran Canaria. 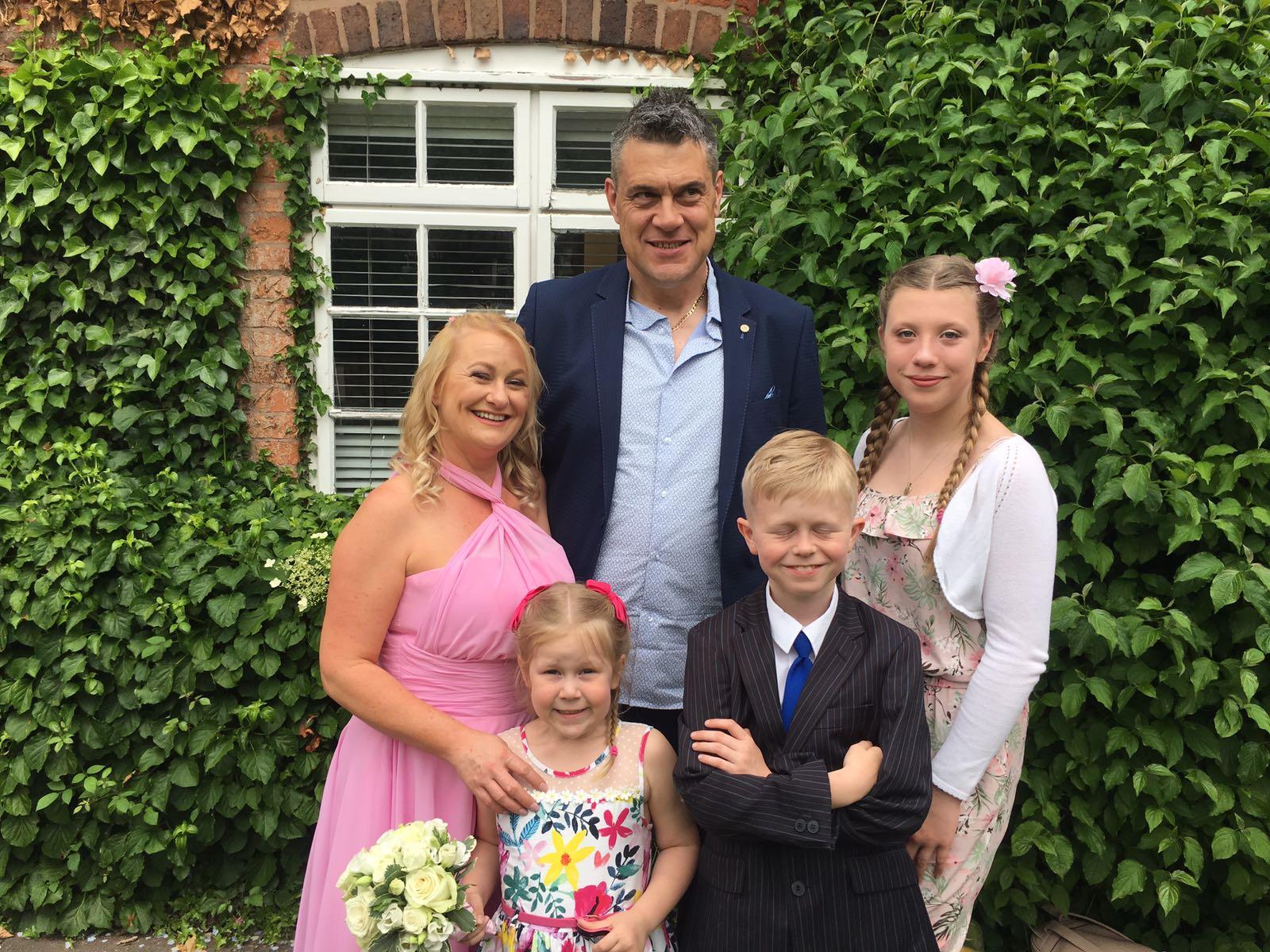 Mya was left with three inch lacerations to her abdomen and left leg when the glass shattered against her body weight.

Her parents said that the injuries left her stomach "flapping" open.

Vicki, who works as a health and safety consultant, claims there was no rubber sealing against the glass so when little Mya unexpectedly ran at it, the glass slammed against the metal door frame and shattered.

The parents rushed Mya to hospital and shards of glass which had torn her flesh to within millimetres of her bowels had to be removed. 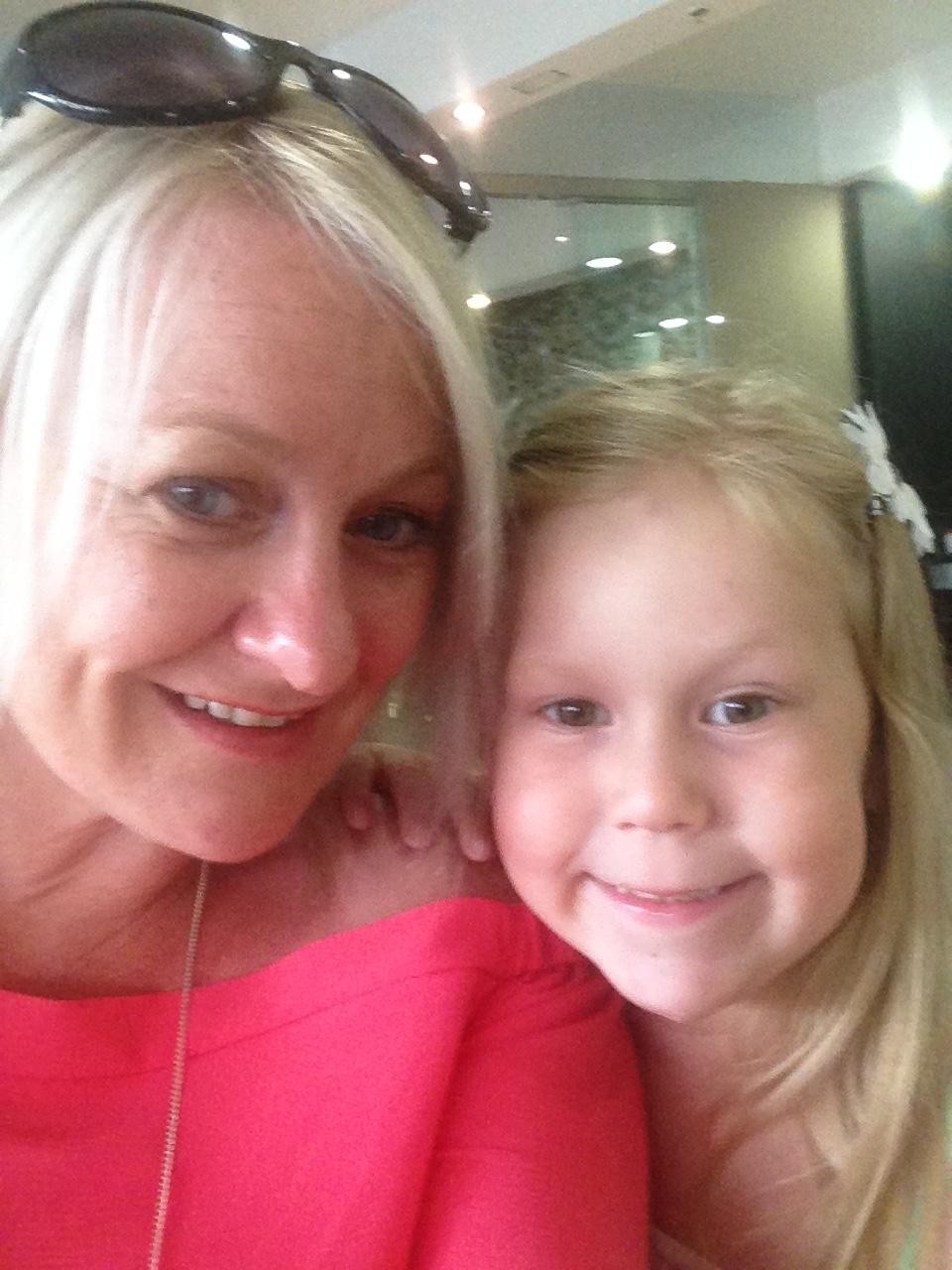 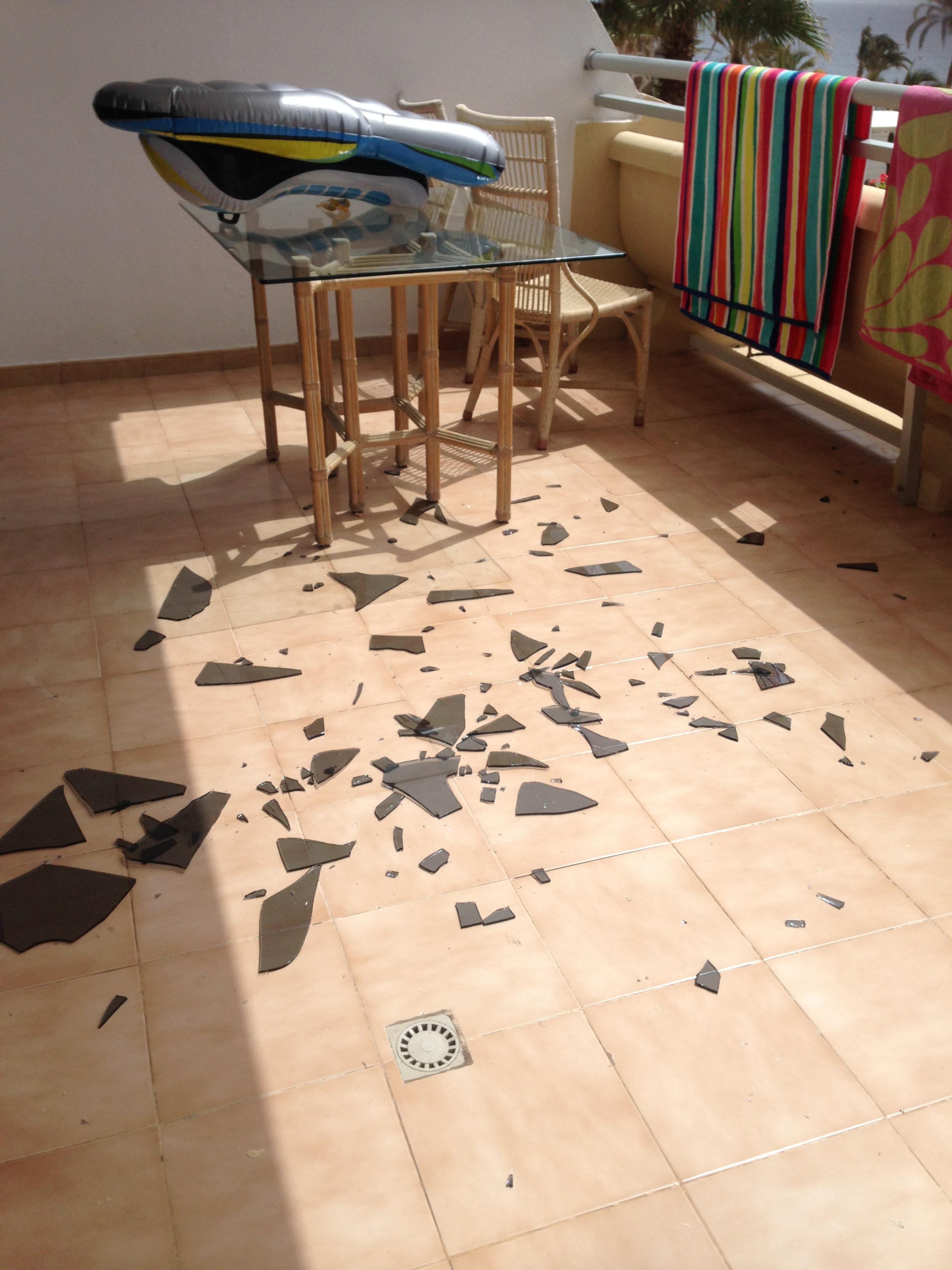 They had been enjoying the first day of their holiday at the Hotel Paradise Lago Taurito when the incident unfolded.

Vicki, from Cannock, West Mids, said: “It was traumatising. Thinking of the family holiday that it should have been, it just wasn’t.

“The hotel had been recommended by our travel agent so I didn’t even think to check it out first – I just felt reassured it would be a good choice for all of us. 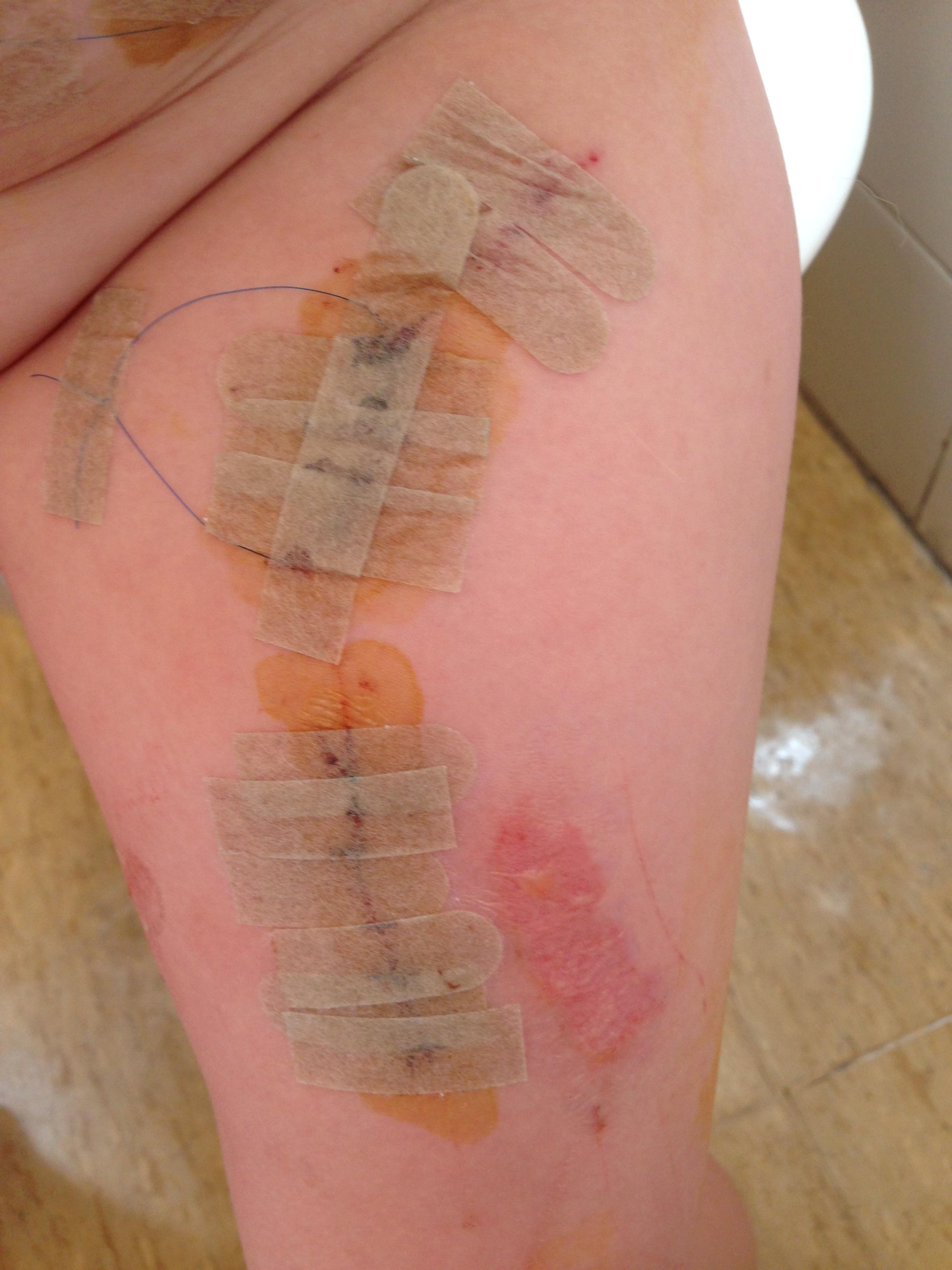 “It was our first day there and we had got up in the morning, got the kids ready, and been to the waterpark.

“We’d gone back to the room and she was in her swimming costume and an overthrow. We got all the kids in off the balcony, and shut the door.

“We had the inflatables on the balcony so she ran out to go and play with the inflatables. Mya just turned and didn’t know they were closed and just ran straight through the glass.

“She didn’t have anything in her hands, toys in her hand or anything that could have broken the glass first. It was just her. It was a shocker for everybody. 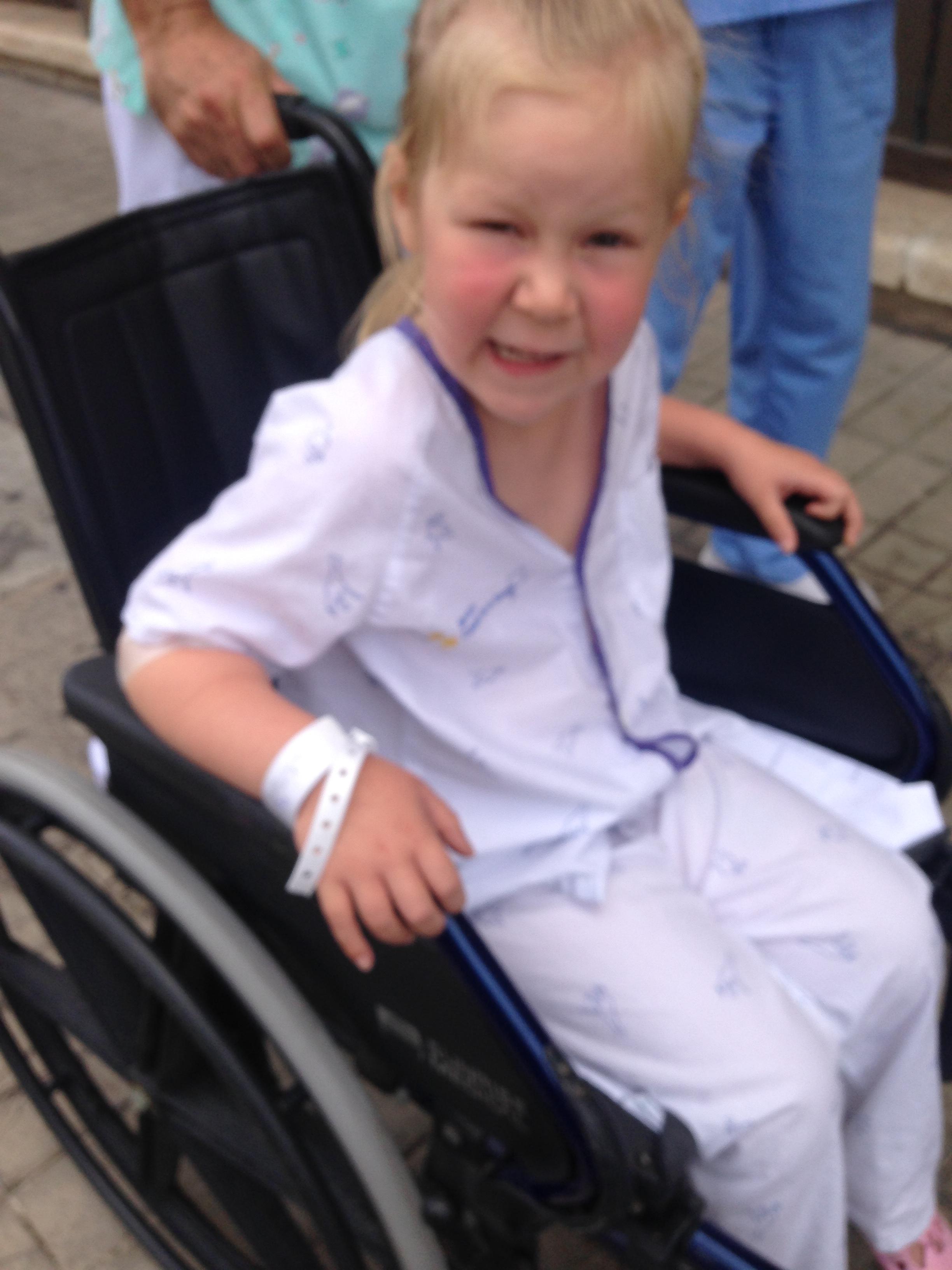 “The rubber was missing from the glass on one side in our room. With the impact of glass hitting metal, there’s no way it was going to bounce back [against her].

“Mya absolutely froze. I saw it happen, so I just ran behind her and followed her through the glass and grabbed her to stop her hitting the floor. She was in absolute shock and didn’t cry.

“I shouted to my partner who was in the bedroom. He grabbed her off the balcony and took her in. She had these lacerations to her stomach and legs.

“My partner was just holding Mya. The stomach was kind of flapping, he said. 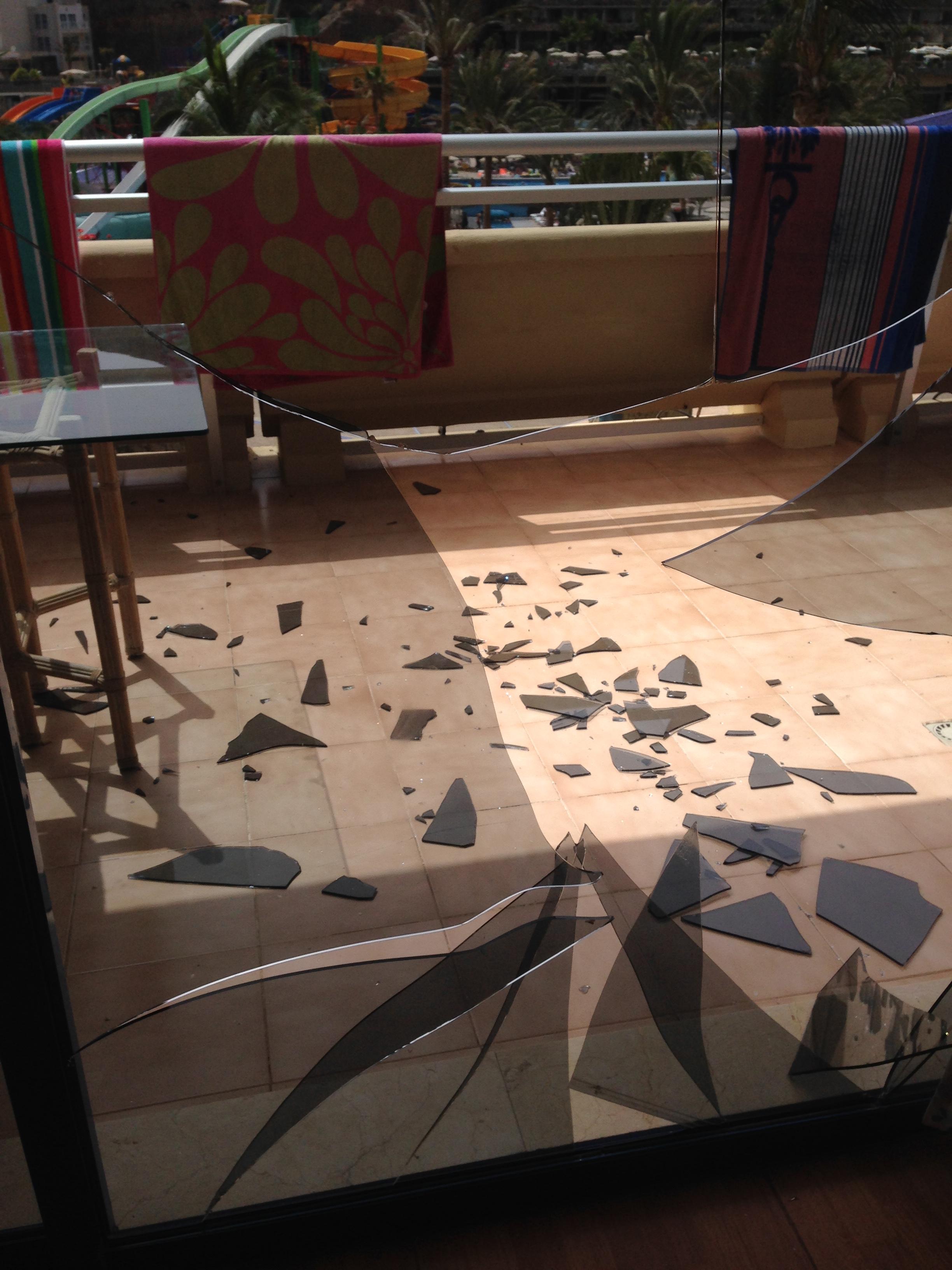 “I had gone to pieces so I had to come out the room because I was making it worse.

“The doctor said to my partner ‘you don’t know how lucky you are that she’s even here because it’s millimetres from her bowel. The fact she’s here, she’s got to have someone watching over her.’

“He couldn’t understand how she was here.”

Vicki claims the glass used in the doors could not have been safety glass – which is toughened so that it is less likely to splinter if it is broken.

When the family were moved to another room after Mya’s accident, Vicki saw that the door was jagged and sharp – and the smoke detector was taped up. 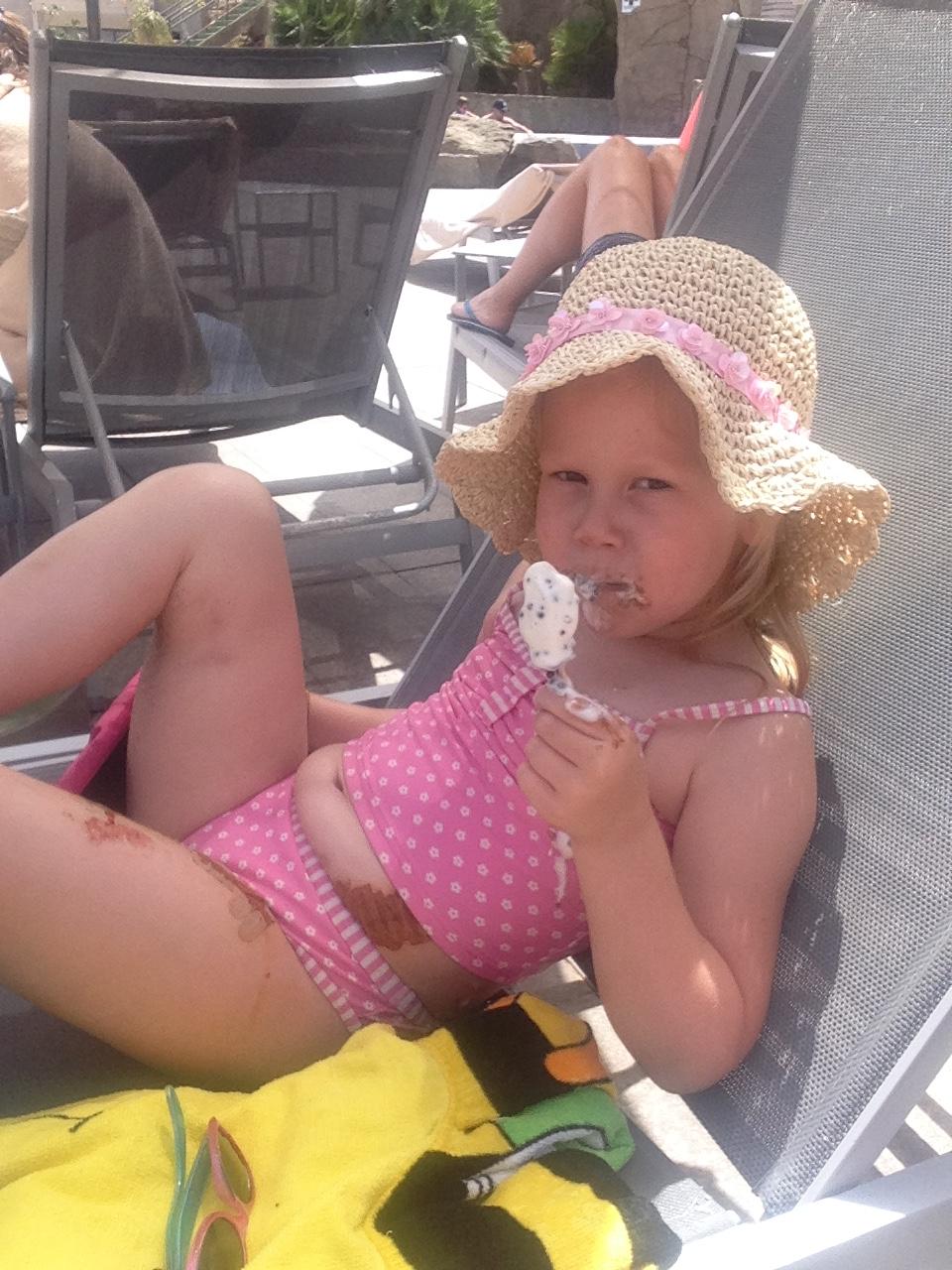 She and Neil, who booked the holiday through Jet2, have sent the travel company a report Mya’s accident and everything they spotted that was wrong with the hotel.

Vicki said: “"She just turned and thought the doors were open because the white stickers on the window weren’t adequate for her to see [that there was glass in the way].

“While Neil and Mya had gone in the ambulance, the hotel gave us a key to a different room.

“All the metal in the catch of the sliding doors in the other room was sheer.  There was no way you could open it because one of the kids could have ripped their arms to shreds.

“The smoke alarm was taped up too.

“The first hotel was disgusting. It was absolutely shocking. Our Jet2 rep came to see us and we told her we’re not happy with the room.

“She said there’s not a lot I can do about what’s happened but I can try and move you.

“So they moved us to the sister hotel across the waterpark and we stayed there – it was a different world to where we’d been.

“The kids said they felt safe on the other side of the resort, which gave us peace of mind.

“But just because you’ve moved us out of one hotel and into another it doesn’t make it better.

“We’re angry it happened, we’re angry with the hotel, and we’re waiting for Jet2 to come back to us following the report we sent through to them.”

A Jet2 spokesperson said: “The health and safety of our customers is extremely important to us and we are very sorry to hear about this incident. Our team have been providing their full support to the family, and as investigations are continuing it would be inappropriate for us to comment any further.”

The Hotel Paradise Lago Taurito have been contacted for comment.