The flash flood that killed dozens of people and left hundreds missing in the Himalayas of India on Sunday was far from the first such disaster to occur among the world’s high-mountain glaciers. In a world with a changing climate, it won’t be the last.

Shrinking and thinning of glaciers is one of the most documented signs of the effects of global warming caused by emissions of greenhouse gases, scientists say. Glacial retreat in mountains around the world has been measured, sometimes at a rate of 100 feet or more each year. In the Himalayas, the most glaciated mountain range and home to about 600 billion tons of ice, the rate of retreat has accelerated over the past four decades.

Over the long term, there are concerns about what the loss of glaciers will mean for billions of people around the world who rely on them at least in part for water for drinking, industry and agriculture. But the more acute fear is for the safety of the people who live near them.

Ice lost is water released, and in the Himalayas, as elsewhere, some of that water is trapped in lakes as it runs down mountainsides, dammed by rocky debris the glaciers leave behind. Worldwide, as more ice has melted, the resulting lakes have increased in number, and the total volume of water in them has grown by 50 percent since 1990.

“Climate change, we believe with 100 percent surety, has to be the reason these lakes are forming and increasing,” said Umesh K. Haritashya, who studies glacial hazards at the University of Dayton in Ohio.

Glacial lakes are a serious hazard. The debris dam can collapse from the weight of the water or from an earthquake; or an avalanche above the lake can send ice and rock rushing into it. Either way, the result can be a sudden, catastrophic burst of water that can wipe out communities and infrastructure in valleys downstream.

Outburst floods, as they are known, have occurred throughout history. In Uttarakhand, a 2013 outburst led to flooding, destroyed villages and killed several thousand people. Elsewhere on the subcontinent, outburst floods in the mountains in 1929 affected the Indus River nearly 500 miles away. In the Andes in Peru, glacier-related flooding has killed an estimated 30,000 people since the 1940s. 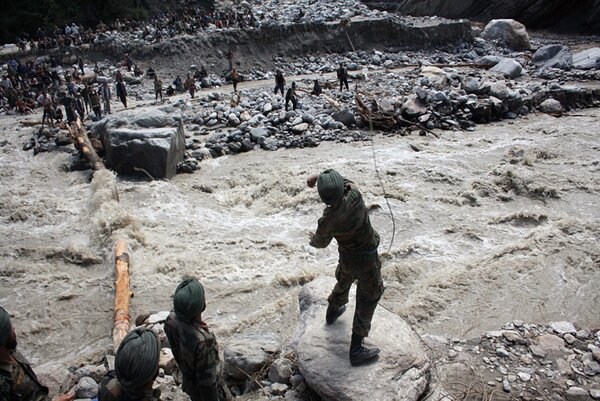 In Switzerland and some other countries, engineers have built siphons to drain lakes that pose particular threats to communities or infrastructure. But worldwide such projects are few and far between and are overwhelmed by the rise in the number of glacial lakes.

Rising temperatures affect more than glaciers, however. Thawing and refreezing of ice trapped in rock fractures on mountain slopes can cause the slopes to become destabilized and more prone to collapse.

“We’re seeing more and more in the high mountains cases of the rock and mountains not being as stable as we would have thought,” said Dan Shugar, a geomorphologist at the University of Calgary in Canada.

While it is too early to directly link the disaster in Uttarakhand to climate change, destablilization resulting from melting ice may have been responsible.

Although the Indian government claimed that an avalanche that poured into a river and created the flood was caused by “calving,” or breaking, of a glacier at high elevation, scientists who analyzed satellite images from before and after the disaster said the collapse of an equally high rock slope was more likely the cause.

Dave Petley, vice president for innovation at the University of Sheffield in Britain who has long studied landslides, said that such slopes often contain a lot of rock fractures, and ice acts like a glue that holds them together. “As the climate is warming, this ice is degrading in the summer,” he said. “The rock mass becomes so weak because the glue that’s holding together isn’t there anymore.”

One mystery is the source of all the water for the flood, which combined with sediment to create a wall of mud that traveled down the Rishiganga River, sweeping away houses and people and leaving two hydroelectric projects in ruins.

Many scientists thought at first that such a huge amount of water must be the result of an outburst flood. But satellite imagery from before the disaster showed no signs of any large lakes.

Dr. Petley said it was likely that the rockfall — which was probably on the order of tens of millions of cubic yards of debris — struck a glacier, fragmenting it. “These rock avalanches are very energetic and chaotic,” he said.

What was now a rock-ice avalanche continued downhill, generating immense heat from friction as it did so. This heat likely melted much of the ice. “That’s probably where all the water came from,” he said.

Heavy snow cover in the region, some of which had begun to melt in the days before the disaster, may also have contributed, some researchers said.

In addition, when this mass of rock and now-melting ice reached the valley floor, it quite likely encountered huge amounts of sediments deposited by a landslide in 2016, the scars from which are visible in satellite images. That sediment would have mixed with the incoming debris, worsening the flooding’s impact.

“From what I’ve been able to see, the chain of events may have started in 2016,” said Mylène Jacquemart, a glacier researcher at the University of Colorado.

And while this particular chain of events may seem like a one-time event, it’s not, Dr. Jacquemart said. A deadly 2017 mudslide that struck the village of Santa Lucía in Chile followed a similar pattern, she said.

Outburst floods and the collapse of slopes subject to thawing are not the only glacier-related hazards linked to climate change. A glacier is a river of ice, and the ice acts as a buttress for the slopes on either side. As a glacier retreats and thins, these slopes lose their support. The result can be a sudden collapse and an ice-rock avalanche as the slope debris hits the glacier.

Scientists sounded the alarm last year over the potential for such a disaster in Prince William Sound in Alaska, not far from Anchorage. A mile-long slope along a fjord had lost most of its support because of retreating ice, raising the risk of a landslide into the fjord. The resulting sudden tsunami could be deadly for any hunters or fishing boats in the area, and could destroy coastal villages.

Faster melting of glaciers is also causing some glaciers to flow faster, as meltwater acts as a lubricant between the ice and the underlying rock. In some cases they have flowed so fast that the front of the glacier simply breaks off unexpectedly, Dr. Jacquemart said.

Two such detachments occurred within two months of each other in 2016 in the Aru Range in Tibet, she said.