Motorway potholes are taking more than a month to fill in, causing damage to cars and endangering drivers

Lethal potholes are being left for months on British motorways, damaging cars and endangering the lives of motorists.

Highways England is responsible for looking after England’s motorways and major A-roads.

It receives around £3billion a year from the Treasury and employs an army of 4,000 staff. 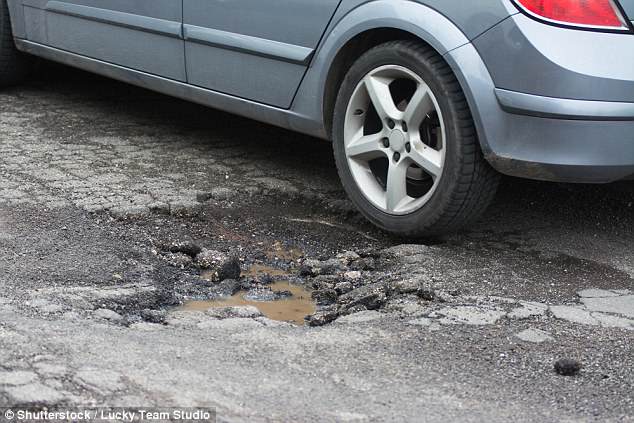 But despite its enormous resources, long stretches of the national road network are littered with potholes.

The government-backed agency’s policy is to fill in the most dangerous holes within 24 hours after being alerted by members of the public or spotted by staff.

Less serious potholes have to be sorted out within 28 days, giving it much more leeway than councils, some of which pledge to fill in the worst potholes within hours.

And its regulator the Office of Rail and Road does not monitor how quickly it fixes them.

Drivers complain the agency often takes weeks or even months to act. Many have tweeted it directly, alerting fellow motorists.

They have moaned about the condition of the M11 near Bishop’s Stortford for more than two months. On February 10, Ann Hooks said she was ‘shocked’ by the state of the M11 from M25 up to Stansted and from the A120 from Stansted to Braintree.

She described ‘potholes everywhere’. Steve Bayford added on March 7: ‘There is yet another large pothole in lane 2 around 1 mile north of J8 northbound on #m11 – you can’t miss it! How you getting on with repairs above? Thanks.’

Karl Johansen appealed again on March 28: ‘Please someone sort out the 2-mile stretch at junction 8 on the M11 to Stansted before someone gets killed!’

Then Tom Somers posted on April 2: ‘The M11 is a joke with the amount of potholes especially from Stansted to M25 and with no streetlights it makes it a nightmare … When are you guys going to sort it out/fix?? It’s been like this for too long.’

Another driver posted a picture of his bent front wheel, after hitting a pothole between junction seven and eight. He said repairs cost almost £900. Eventually Highways England closed the road on Thursday between junctions eight and nine northbound to carry out ‘patching work’. But some motorists have moaned that the body has a lot more leniency. For instance, Highways England has 28 days to fix some non emergency potholes whereas most councils only have hours (file photo)

Motorists have expressed similar frustration about the M1, M2 M69, M6, M25 and M42. RAC spokesman Simon Williams said: ‘It’s bad enough hitting a pothole at 30-40mph on a local road, but at motorway speeds of 70mph, the results could be catastrophic.’

Brackley council’s deputy mayor Mark Morell emailed Highways England on February 5 about the A43 in Northamptonshire.

It took the agency until mid-March to act – but even then only filled in a pothole rather than doing a permanent repair. Mr Morrell – nicknamed Mr Pothole – said: ‘Highways England is often failing to maintain roads to safe standards despite being given billions by the Government.’

The agency said that 95 per cent of the 4,300 miles of roads it manages are in good condition. A spokesman insisted: ‘Of the 4 million drivers who use the strategic road network every day, there were 215 successful claims for damage to vehicles caused by a pothole recorded last year.’

And a spokesman for the Office of Rail and Road said: ‘The management of response times to specific defects on the road is for Highways England to manage…’