Another ASDA customer has blasted the supermarket after her garden tables ‘exploded’ in the summer heat.

Sharon Harvey was stunned in June when her patio table shattered in the near-record temperatures.

The £400 Jakarta set was replaced but just weeks later the second piece of furniture also fell to pieces.

Sharon, from Birmingham, posted two photos of the separate tables along with a lengthy Facebook post outlining her disapproval. 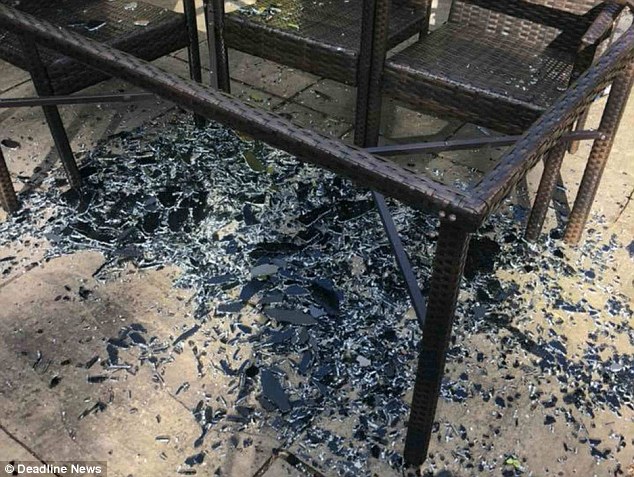 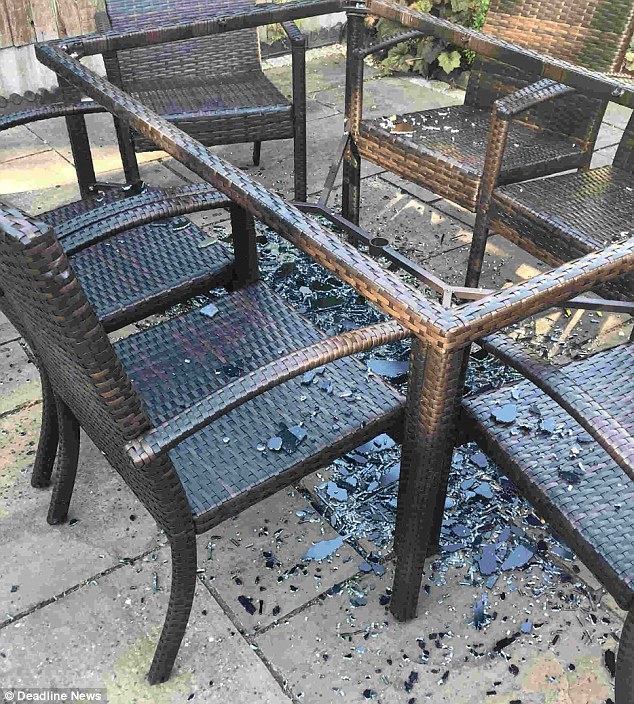 Sharon Harvey’s replacement table also smashed under the sun on June 30, she said, as the mother called for Asda to take responsibility 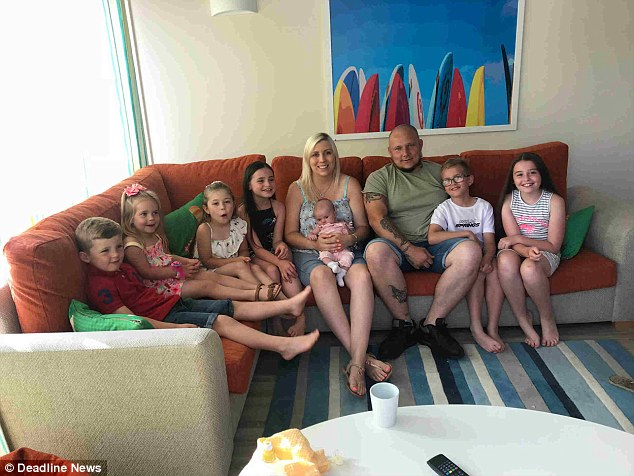 Sharon Harvey (pictured with her family) says her first patio table from the supermarket shattered into thousands of pieces on June 16. Incredibly, on June 30 she posted that her replacement table, believed to be part of a £400 Jakarta set, had also exploded in the heat

She said: ‘Hi Asda. Spot the difference? Shall I give you a clue? The only difference between the 2 pictures is….. (drum roll…) Two weeks.

‘Yes, sadly, if you’d been a multi billion pound retailer, you would have had the resources to conduct adequate market research and/or product safety checking and rather than replacing like for like the first table that shattered in the sun, you would have offered an alternative.’

Yet Ms Harvey is not the only customer to have experienced the shattering tables.

Earlier this week, Paige Angela Tompkins, 23, from Leicester, revealed that her £90 Miami table set from Asda had also exploded in the heat. 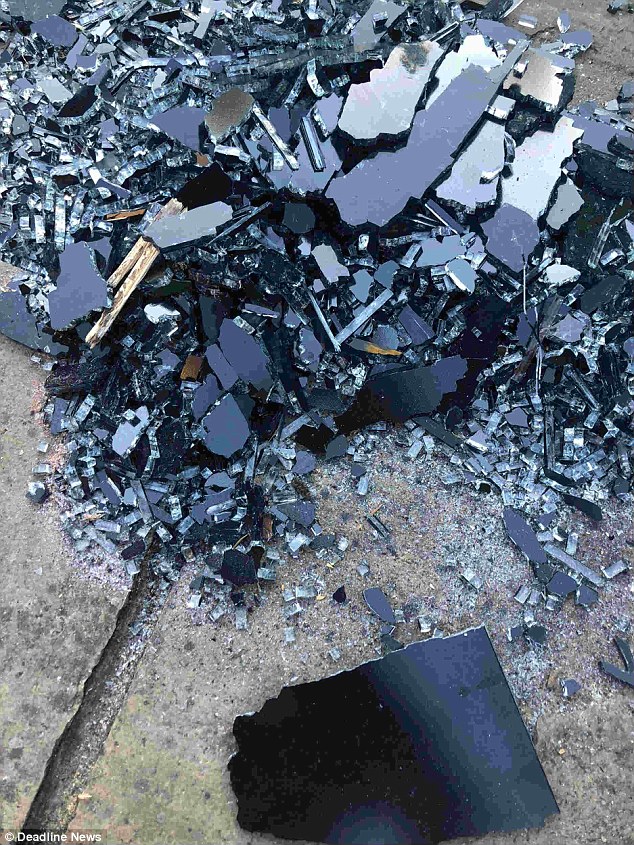 Sharon’s patio was left covered in shards of glass on two occasions within a fortnight, the Asda customer said

Miss Tompkins whose three-year-old son ate at her table in Leicester said: ‘I’ve rang Asda to Inform them of what happened where I was told they know about this matter as it’s been happening a lot and that I would not been given a refund as I no longer have packaging or a receipt for the item.’ 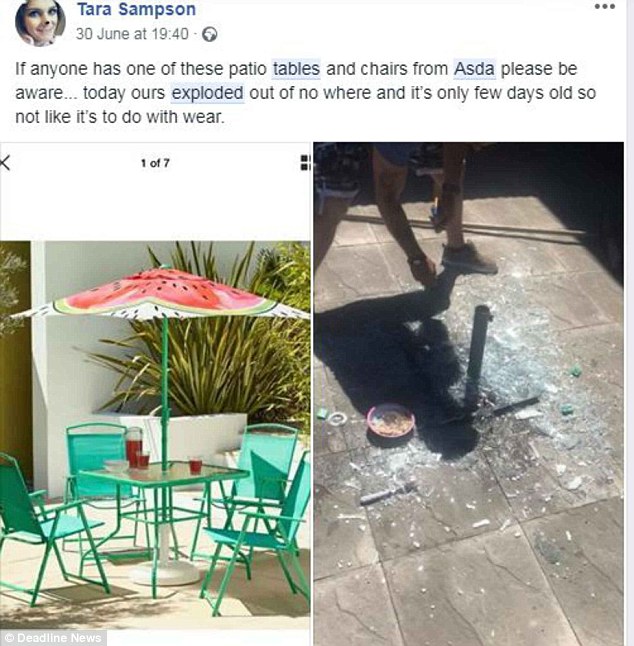 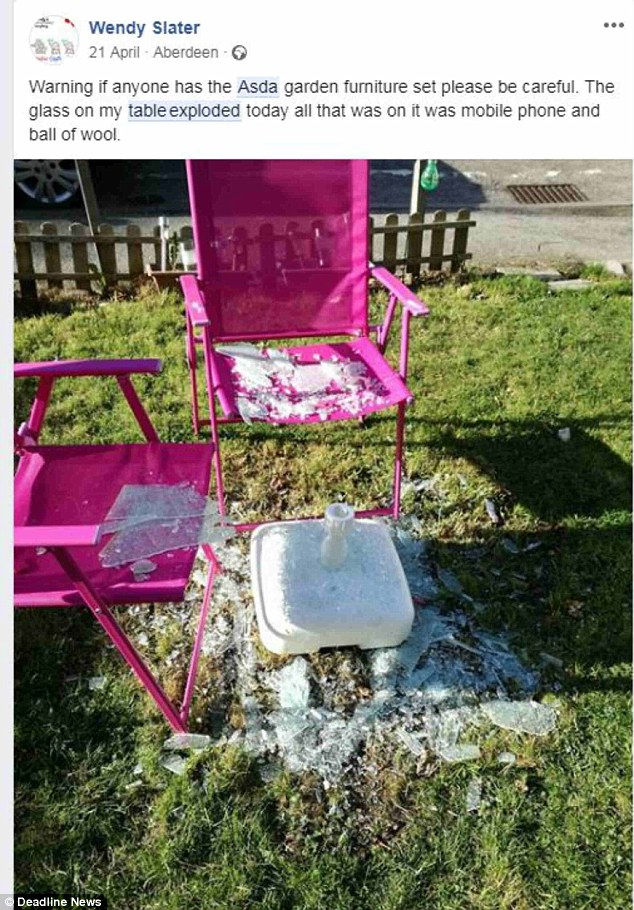 Wendy Slater’s Asda purchase also ended up in pieces. Multiple customers have complained about their items breaking up in the heat

At least four other Asda customers have made similar complaints since the spring.

Wendy Slater from Aberdeen posted on April 21 to warn others to ‘be careful’ after her garden table ‘exploded’ in the sun.

Tara Sampson from Spalding, Lincolnshire, posted on June 30 that her table ‘exploded out of no where.’

And Elaine Connell said on July 6 she was ‘raging’ when her table also exploded and you could hear the glass shards ‘popping.’

Mum of seven, Clare Angell, from Stevenage, claimed on May 26 her young daughter cut her foot from the shards of a £200 B&M table. 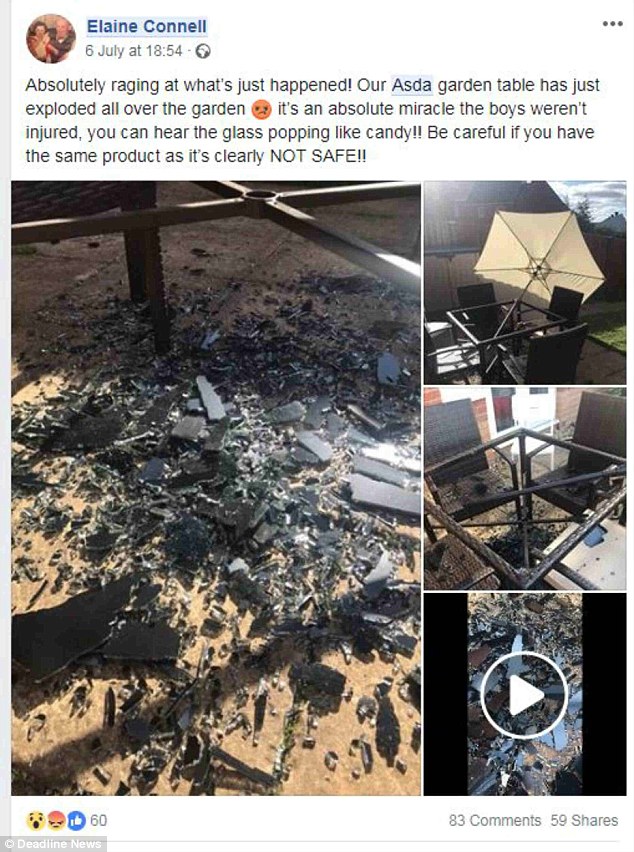 Elaine Connell also posted recently about an exploding table from Asda. The store has been urged to recall products

The 29-year-old said: ‘I was concerned they may be a faulty batch! The manager wouldn’t have any of it, wouldn’t even acknowledge the newspaper reports! His next defence was he doesn’t know how I treated the table since I purchased it!’

ASDA said earlier this week, in relation to Ms Tompkins’ complaint, that these incidents are ‘very occasional’.

A spokesman said at the time: ‘We’d like to reassure all our customers that  this product has passed all safety requirements and of the 45,000 glass top tables we sell each year there have only been a handful of examples when this has happened.’

B&M have also said that the safety of their products are ‘really important’ to them.

A spokeswoman said: ‘Occurrences like this are very rare, occasionally imperfections can develop if a table has been marked, dragged or knocked – the glass is designed to shatter into small pieces rather than dangerous shards of glass.’