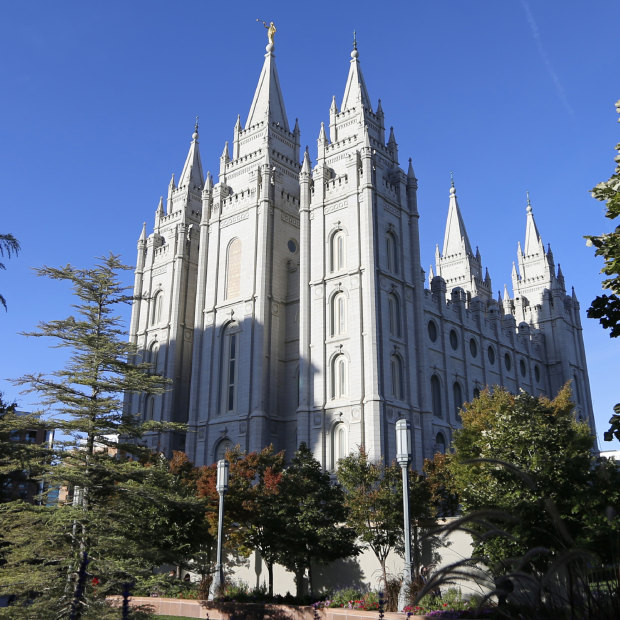 The Salt Lake Temple in Salt Lake City, the centre of world Mormonism.Credit:AP

The global Mormon church has overstated the amount it gives in charity by more than $US1 billion ($1.56 billion), apparently to make itself appear more generous than it actually is, and the US-based church is now under scrutiny over an alleged international tax minimisation scheme that involves Australia-based church entities.

The Utah-based Church of Jesus Christ of Latter-day Saints (commonly called the Mormons) has built an extraordinary pile of tax-free wealth by requiring its 16 million members to “tithe”, or pay 10 per cent of their income to the church. But its own accounts show it actually gives to charities less than 1 per cent of what it receives.

In addition, the church runs a $US100 billion, tax-free investment fund, Ensign Peak Advisors, which has quietly built up major stakes in blue-chip firms and now has multibillion-dollar investments in Apple, Microsoft, Amazon and Google owner Alphabet. It also invests in major weapons manufacturers including Lockheed Martin, Boeing and Northrop Grumman. 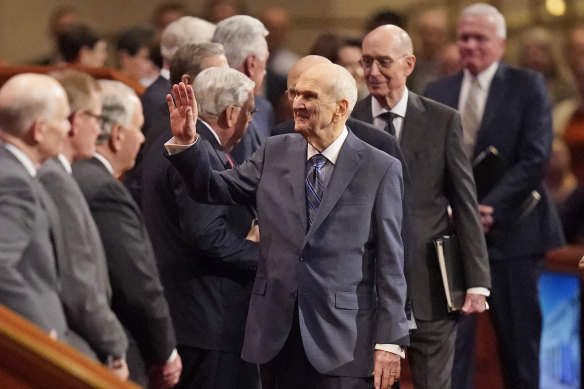 The Church of Jesus Christ of Latter-day Saints President Russell M. Nelson (centre) waves as he arrives during the twice-annual church conference in Salt Lake City in April 2022.Credit:AP

Ensign Peak is supposed to be used to fund charitable and other spending, but former insiders alleged it was almost entirely used to stockpile cash and investments.

“The Mormon church will have you believe that it’s a religion that dabbles in business, but the evidence clearly shows that they are a business dabbling in religion,” said former Mormon and whistleblower Ryan McKnight.

The church denies this, saying through a spokesman: “The Church of Jesus Christ is not a financial or profit-making institution and uses its resources to carry out its divinely appointed mission”.

The extent of Mormons’ charity overstatement is shown in 15 years of previously unreleased financial reports, which have been uncovered as part of a joint six-month investigation and collaboration by The Age and The Sydney Morning Herald, the Canadian Broadcasting Corporation and 60 Minutes.

In public statements, the church has claimed its global giving through its charity arm, Utah-based Latter-day Saint Charities increased by $US1.35 billion between 2008 and 2020. The church says it funds programs through organisations such as the Red Cross, Water For People and the World Food Program.

A church spokesman did not directly answer questions about the discrepancy but maintained that its public statements offered the “best summary and insight” into its charitable spending.

Former member Lars Nielsen, who helped expose the existence of Ensign Peak in 2019, said it was unclear what was happening to the money being collected by the church.

“How is this possible, that they seemed to be getting billions of dollars every year, and they’re never spending it on anything charitable or educational or religious … None of it was going to any of these programs. It was a black hole,” he said. 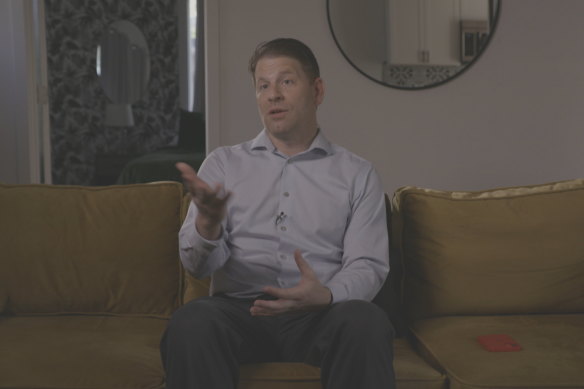 Nielsen’s twin brother, David, worked at Ensign Peak and shared details on its operations with Lars which were first reported by The Washington Post in 2019. The brothers then worked together on a US Internal Revenue Service complaint. In a rare interview as part of this joint investigation, Lars Nielsen said he was driven by the need to tell the truth, which he attributes to his strict upbringing in Mormonism.

Lars said in the late 2010s, while his brother still worked at Ensign Peak, the fund was earning as much as $US7 billion in interest. The church’s charity accounts now show that its charitable spending was about 0.28 per cent of the interest, or $US20 million at around that time.

He said his brother was unclear about what the money was being stockpiled for. “Do we need it to rebuild the country after the second coming and there’s the day of reckoning and burning when people haven’t been paying their tithing?” he asked. “The best answer he ever got was, ‘the Lord is in charge and he is preparing, and our job is to be ready for him when he calls us to that’.”

A church spokesman said its commercial investments were “for the singular purpose of inviting and helping people to come unto Christ”.

But Nielsen said the church’s behaviour was “totally unethical” and “absolutely” a case of fraud – a claim rejected by the church.

“But then how do they rationalise that unethical behaviour? Well they say, ‘Well, we are going to use it, and we’re going to use it when the Lord tells us to do it. You don’t need to question us about that because we have divine authority.’ So, they skirt that ethical issue.”

Mormonism is a US religious movement that began in the 19th century. Mormons are required to pay 10 per cent of their gross income in tithing, a significant financial impost on followers. Nielsen said this was hard on poorer Mormons, particularly in the developing world, describing it as “an extremely regressive tax”.

One of the greatest “shames of my life” was that as a missionary, he had pushed a poverty-stricken Mexican woman to pay 10 per cent of her modest income in tithes.

“She decided to forgo her tortilla money so that she could give something to the church.”

An analysis of the financial accounts of the Utah-based Latter-day Saint Charities show that as the Mormon church was raising many billions in tithing and investment income each year, its level of direct cash support back to the charity was just $US10 million a year. Its accounts show that it provided in-kind support such as office space, some management costs and administrative support that was worth an extra several million dollars a year.

The accounts of the Australian arm of the Church appear to show significant charitable giving, but it’s unclear how this fits with the global picture.

University of Tampa sociology professor Ryan Cragun, a former Mormon and expert on the religion, said the lack of giving by the church was “shocking.”

Professor Cragun said the overstatement of its charitable giving may be in response to scandals over the extent of the Church’s wealth.

Ryan McKnight, who ran the investigative MormonLeaks website until earlier this year, has also campaigned for greater transparency in the church’s finances. Brought up as an active Mormon it was reading about the history of polygamy that made him first question his faith. 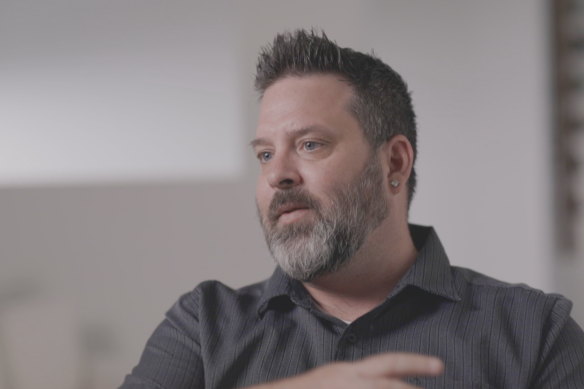 Later it was uncovering, in 2018, that the church had more than $US30 billion in investments — a figure that it later emerged was part of its Ensign Peak fortune. He also exposed its extensive landholdings.

“They are clearly, without a doubt, the wealthiest single landowner in the United States, there’s no question about it. Nobody comes even close. ”

McKnight said it was reasonable for at least some of its excess money to be taxed by governments, or it would continue to just grow its wealth through investments in the private sector.

The joint investigation has also uncovered significant evidence of alleged tax minimisation and evasion by the church, including in Australia and Canada where hundreds of millions of dollars are routed through shell companies or other entities to maintain the tax-free status of its income.

In Canada, it has donated about $C1 billion ($1.15 billion) over the past 15 years from the Canadian church to Mormon-owned universities in the United States. Under Canadian tax law this entitles it to a tax deduction (as it is for an educational purpose) even though the Brigham Young University campuses in the US have few Canadian students.

“It certainly flies in the spirit of the law,” said Nielsen.

The Age and The Sydney Morning Herald revealed in April that the church in Australia had structured itself to allow its adherents to collect hundreds of millions of dollars in tax exemptions that are not lawfully available to followers of other religions.

In Australia, the church has ensured that donations and tithing — which are not tax-deductible in this country — are routed through a charitable trust to gain 100 per cent tax deductibility.

Australia is unusual among English-speaking countries in that it does not allow tax deductions for tithing or church donations. But it does allow generous deductibility for charitable giving.

The Mormon church has structured itself to maximise that tax benefit, and reports that it spends up to 70 per cent of its Australian income on charity. The church has said it complies with the law.

At the time, Andrew Leigh, who is now the assistant minister for charities, called for an immediate investigation by the Australian Tax Office into the allegations. There has been a separate complaint by whistleblowers to the charity regulator.

Do you know more? Send a confidential message to [email protected]