This is the incredible moment a hero gardener risks his life to save a terrified dog swept off an overflowing dam into raging rapids in South Africa.

Scamp had tried to follow his owner across a watery causeway from one side of a filled-up dam to the other but was carried away into the surging rapids far below.

After being spun over and over at the bottom of the water, the pet miraculously clambered to safety onto a rock in the wild torrent.

Passerby James Stewart, 65, who was out for a walk with wife Stella, 65, saw the drama and leapt into action by racing back to his nearby home for a rope.

He called to his neighbour’s gardener Amos Ndlovu, 35, who was cutting grass and asked him if he would leap into the raging water to try a rescue. 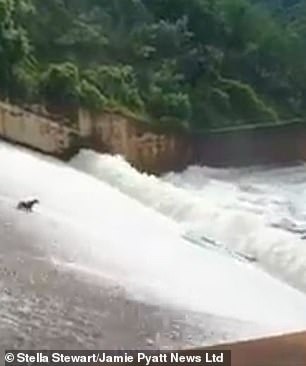 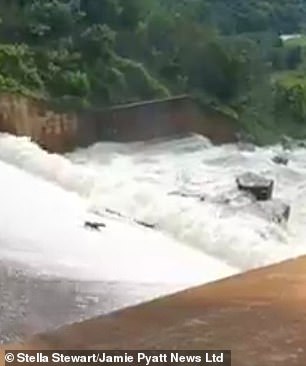 Scamp the dog pictured heading for the rapids below (left) and splaying his legs as he prepares to plunge in the torrent (right) in KwaZulu-Natal, South Africa 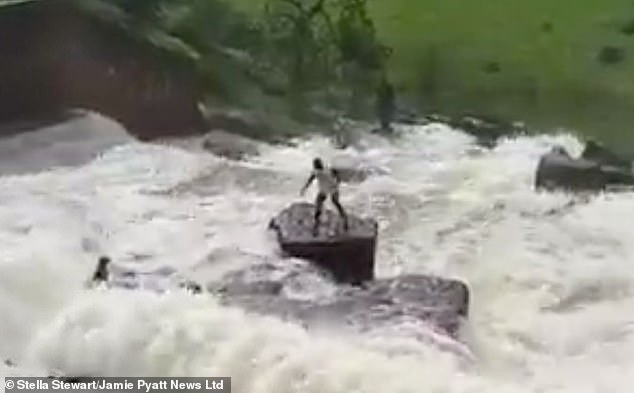 Brave gardener Amos Ndlovu, 35, pictured after reaching the safety of a giant rock in the middle of the torrent as the dog watches him while frozen in fear to a rock

Without a second’s hesitation Amos volunteered and tied the rope around his waist while James held the other end and climbed down into the freezing flood water.

Stella recorded the gripping rescue attempt on her phone on Saturday at the Bell Park Dam above Champagne Valley in KwaZulu-Natal, South Africa.

During the five-minute nail-biting video Amos can be seen bravely edging his way step by step across the slippery rocks being battered by the fast-running overflow.

When he finally reaches Scamp, the dog is frozen to the spot but after a few soothing words from Amos, who has two dogs of his own, he gives him his trust.

Amos picks Scamp up in his arms and begins to retrace his steps through the ever-deepening floodwaters that had by now started to turn his lower legs totally numb.

Stella, whose home at Cathkin Park in the Drakensberg Mountains fronts onto the dam, said: ‘I know that dam well and I knew just one slip and Amos would be dead.

‘If he went over the edge in that torrent if he was not smashed to death on the 100-metre drop the other side then he would have got jammed under a rock and drowned.

‘My heart was in my mouth but I carried on recording anyhow and every single second seemed like a minute as he carried the dog closer and closer to the safety of the bank. 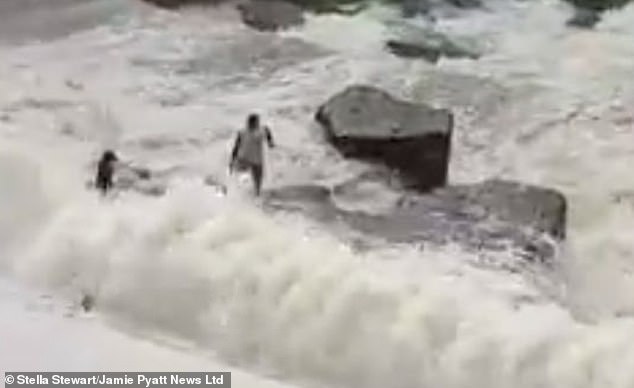 The gardener gingerly moves towards the stricken dog, Scamp, during his rescue. Passerby Stella recorded the gripping footage on her phone on Saturday 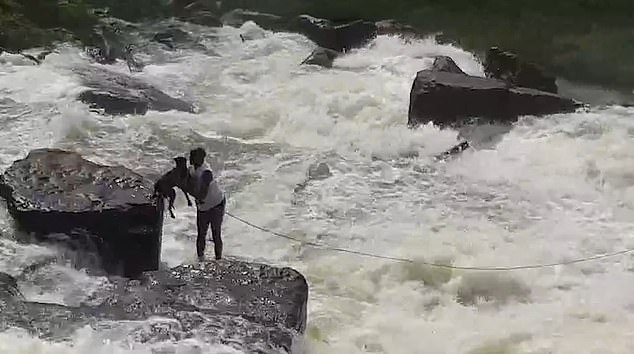 Amos, who tied a rope around his waist, picks up Scamp in his arms before beginning to retrace his steps through the ever-deepening floodwaters 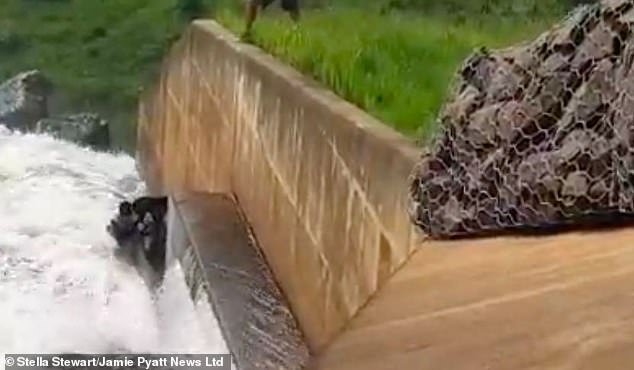 ‘I felt exhausted when Amos made it across and handed the dog up to my husband and then safely pulled himself out the water as well. The rescue took about 5 long minutes.

‘He was the hero of the hour and deserves a medal for what he did.’

Stella revealed that the dog walker who owned Scamp had been caught out by huge rains since New Year’s Day which had caused the dam to burst for the first time in years.

She said: ‘The owner had four dogs and had decided to walk them over the flooded causeway carrying them one by one and had taken the first over and left three behind. 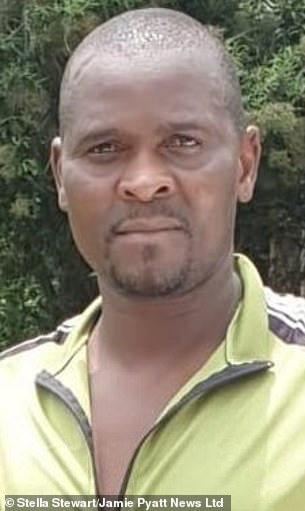 Amos (pictured above) said: ‘I know if I had slipped it would have been the end for me but I was determined to save this dog’s life’

‘However the remaining dogs decided not to stay put and followed their owner and two were washed over the edge but the bigger one managed to scramble back up.

‘The smaller one however just scooted down as if on a slide on his backside picking up speed all the way until he hit the rapids at the bottom and then he just vanished.

‘He was being spun over and over and then he reappeared on a rock looking very scared and sorry for himself .That was when my husband decided to try and rescue him.

‘I am very proud of Amos and my James for saving that poor dog. It is cats who are supposed to have nine lives but this lucky little fella certainly had lady luck on his side’ she said.

Hero gardener Amos, who people on social media are calling to be recognised by an award from the Society for the Prevention of Cruelty to Animals, played down his heroics.

He said: ‘I have two dogs myself and know dogs well and could tell by the way this one was crying and barking that he just wanted to be saved and needed a bit of help.

‘Once he was safe in my arms he trusted me and didn’t struggle which made it easier but I was just concentrating on not losing my footing and going over into the floodwater.

‘I know if I had slipped into the water it would have been the end for me but I was determined to save this dog’s life and I felt confident that I could get us both to safety.

Retired panel shop worker James added: ‘Amos was very brave and very modest and after returning the dog to his overjoyed owner he just went back to work as normal’.