Flying Frenchman Franky Zapata, who made history by becoming the first person to cross the English channel on a homemade jetpack, has been injured after crashing into a lake while demonstrating his invention.

Mr Zapata, 43, sustained injuries after appearing to lose control of his flyboard during an exhibition event at Lake Biscarrosse, in Landes, France, on Saturday.

Stretching across 35km, the vast stretch of water is the second largest lake in France after Lake Hourtin.

A video of the incident posted on Twitter, shows Mr Zapata wearing a full body suit and helmet, taking off at speed and rising high into the air. 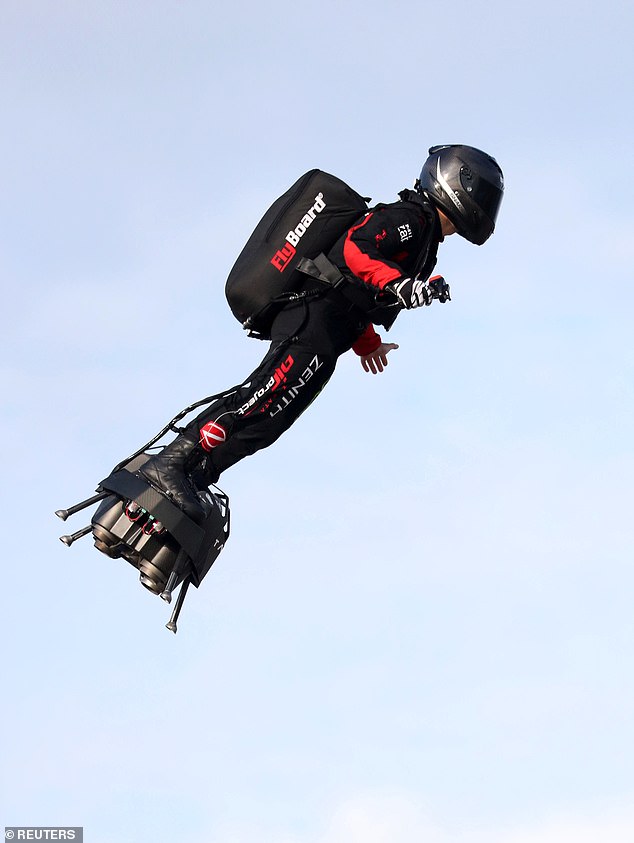 French inventor Franky Zapata, pictured in 2019 during his historic crossing of the English Channel on his Flyboard, has been injured while demonstrating his invention in France 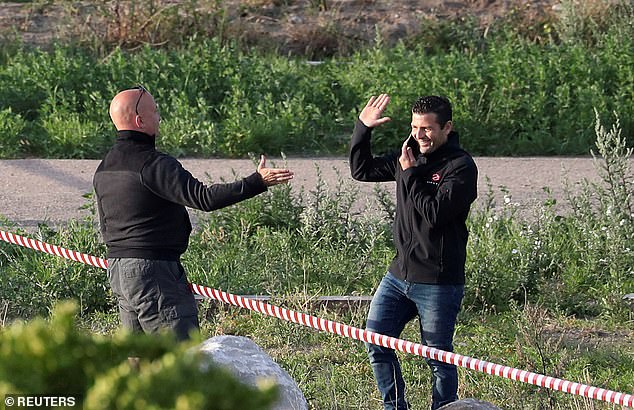 He then makes several turns while still gaining height, before spiralling rapidly, falling around 15 metres and crashing into the water below. 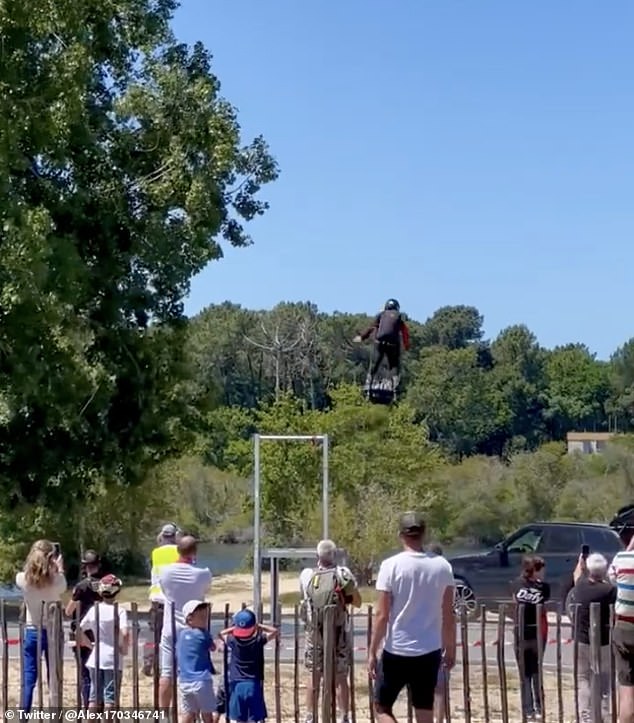 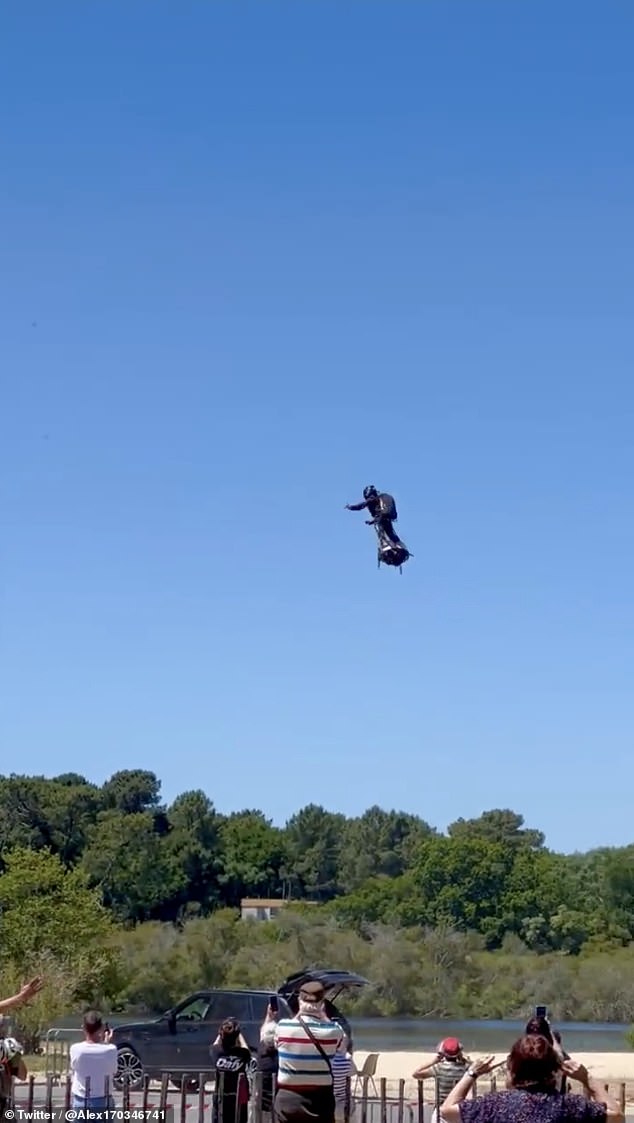 Zapata is seen quickly rising into the air on his device, which can go at speeds of up to 110mph 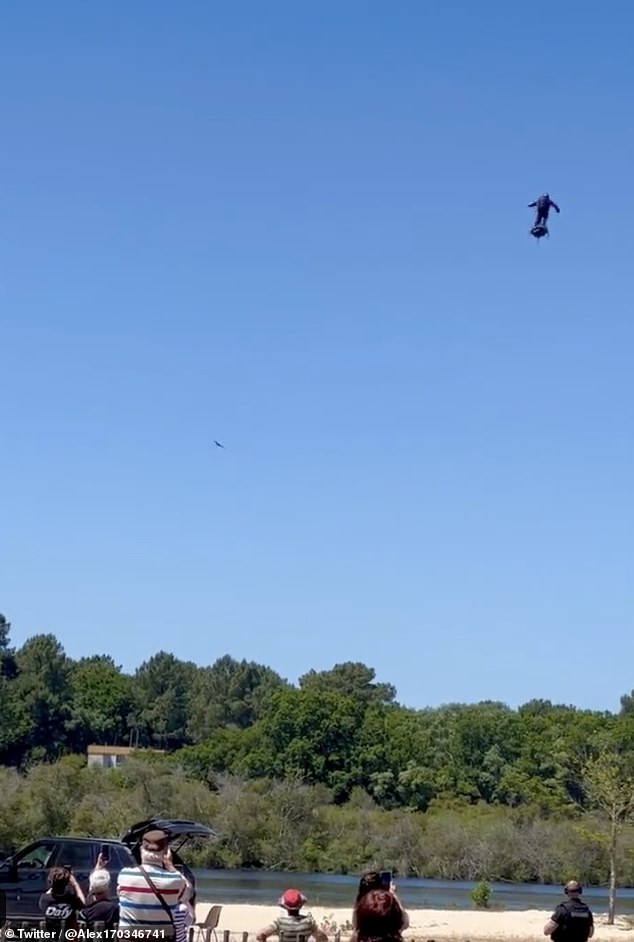 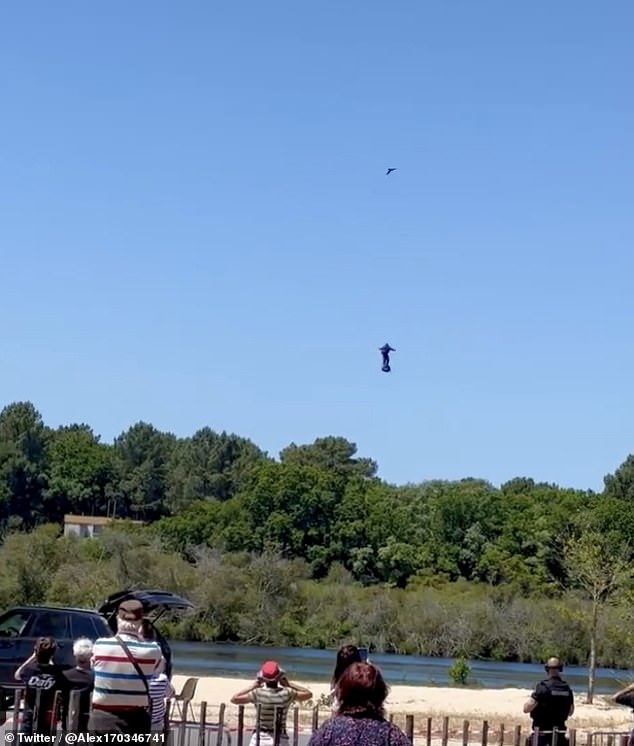 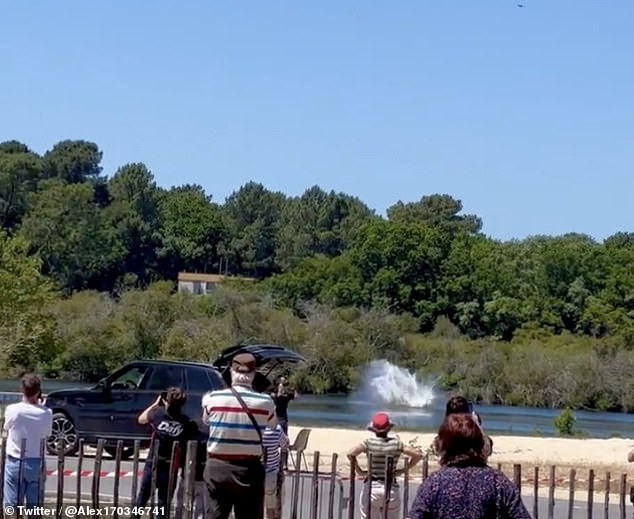 The former army reservist and jet-ski champion made a name for himself after a successful and audacious crossing of the English Channel on his device in 2019.

At the time, cheering crowds shouted ‘Allez le Flying Frenchman!’ as he flew at a speed of some 87mph, staying at least 49 feet above the water, towards the White Cliffs of Dover from Sangatte beach, in Calais.

The home-made hoverboard that flies at 120mph and can reach 10,000ft

Franky Zapata’s designed his home-made hoverboard himself, which is inspired by the flying suit worn by the lead character in the superhero movie Iron Man.

Powered by five jet engines, the impressive ‘Flyboard Air’ can propel its driver through the sky at impressive speeds of up to 120mph and reach an altitude of 10,000 feet.

The state-of-the-art device, which he built from scratch, is powered by kerosene which is widely used as a fuel in the air industry.

Mr Zapata admits it is very similar to the hoverboard used by Marty McFly, played by Michael J Fox, in the Back to the Future films. 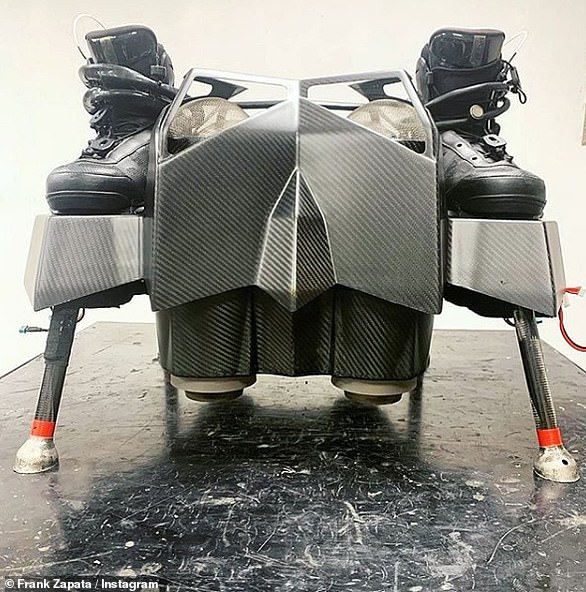 Powered by five jet engines, the impressive ‘Flyboard Air’ can propel its driver through the sky at impressive speeds of up to 120mph

However, current models of the Flyboard Air can only stay airborne for about ten minutes on a single tank of fuel.

The impressive board operates via a small joystick and the rider must maintain a rigid body position while using small movements to help steer. 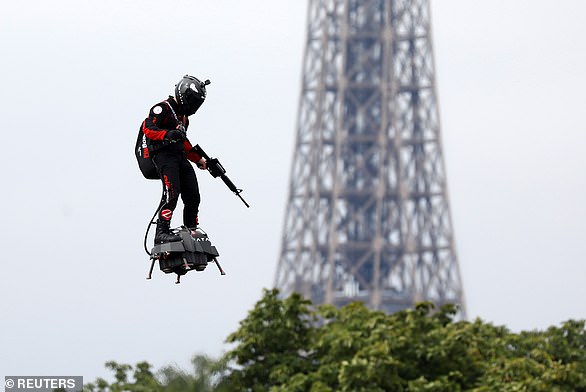 Mr Zapata now hopes it will one day enter commercial production, as a revolutionary piece of military hardware – and he was even granted £1.26 million by France’s Ministry of Defence to develop it.

Armed Forces Minister Florence Parly said that the board would be ‘tested for different uses, for example as a flying logistical platform, or indeed as an assault platform.’

He previously broke a Guinness World Record by using the hoverboard to travel more than 7,388ft off the coastal town of Sausset-les-Pins – but was almost prosecuted by France’s Civil Aviation Authority for the impressive feat.

He has since flown the Flyboard Air across a stretch of the Arizona desert.

Mr Zapata initially designed a board powered by water jets a decade ago, using a hose from the exhaust of a jet-ski to power an aerial device.

It can blast riders roughly 30ft above the waves, and allow them to perform somersaults and other tricks.

It has been in commercial production for several years now and is popular among thrill-seeking holidaymakers across the world.

Mr Zapata then spent four years developing a device that does not need to be connected to a jet-ski, so can fly over both land and sea.

The feat was completed second time around after his first attempt ended by crashing off a refuelling boat 12 miles into the trip.

His Flyboard took four years to develop at a cost of £200,000. It is propelled by five 250-horsepower engines on the underside of the board and can reach speeds of up to 110mph.

This is not the first time Mr Zapata has been injured in the development of his invention, which can reach a staggering 10,000ft.

In 2016, he lost two fingers in the turbines during his first flight on the Flyboard.