DRAMATIC footage shows the moment a dad and his two young daughters saved from their sinking SUV as flash floods hit Arizona.

Firefighters were called on Wednesday to help the family who was stranded in the middle of the Tucson storm. 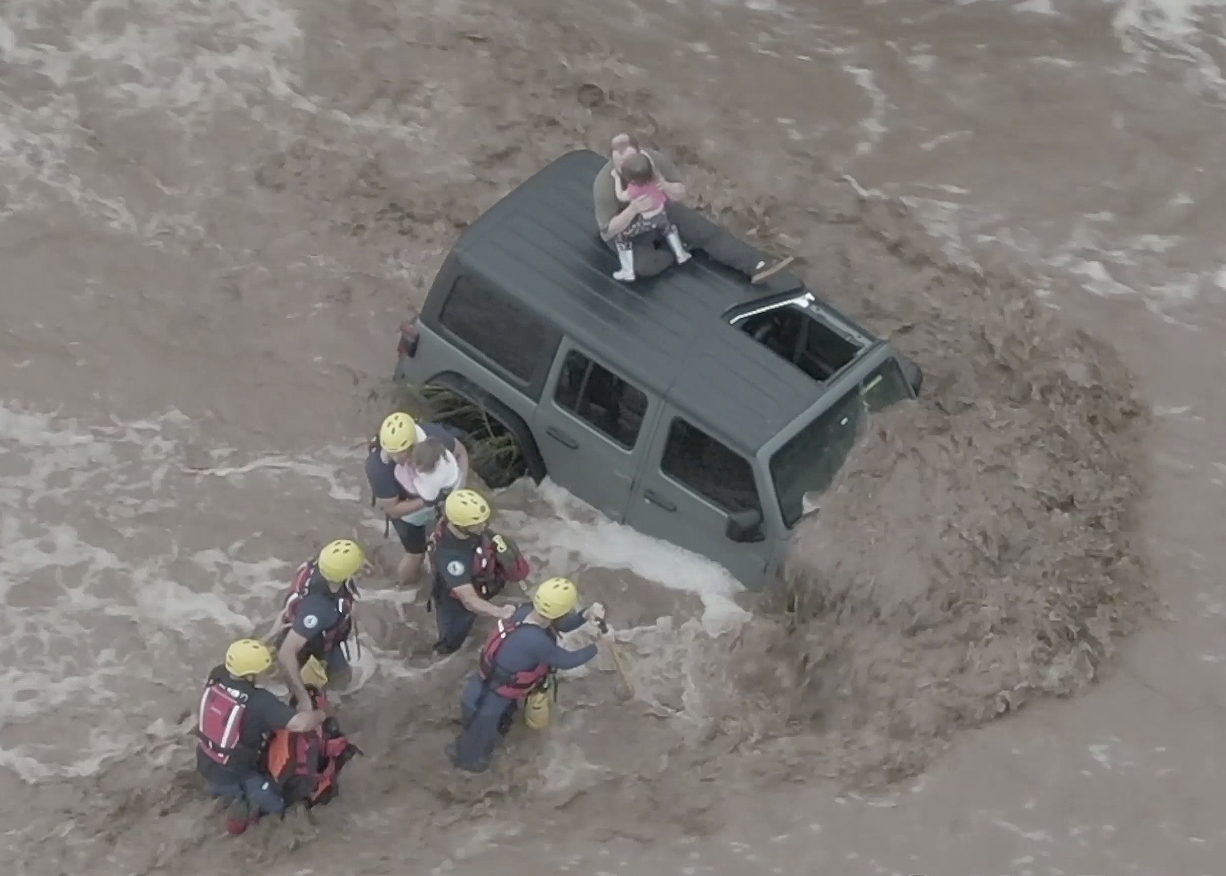 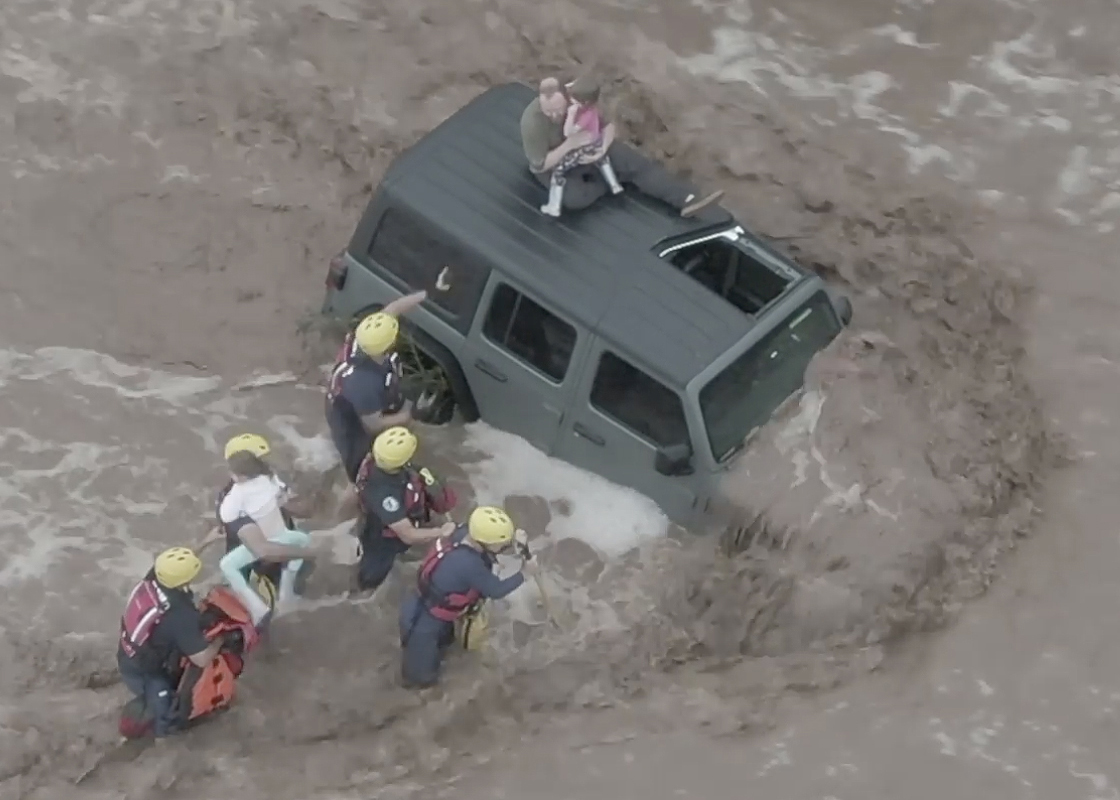 This was not the first rescue mission in the Southwest, which has been experiencing a strong monsoon season.

The family in the video was driving east before their SUV was swept and carried roughly 20 yards by the aggressive waters before the rescuers saved them, Golder Ranch Fire District Captain Adam Jarrold told Tucson.com.

The video shows the firefighters helping the family, who used their sunroof to exit, off the top of their SUV one by one.

Tucson.com reported that the family was rescued without any injury but the status of the vehicle is unknown.

Residents were urged to shelter in place in Coconino County or to move to higher grounds as communities are reporting that the streets and roads are unpassable.

According to Abc7.com, a wildfire that left the earth scarred two years partially caused the flood. 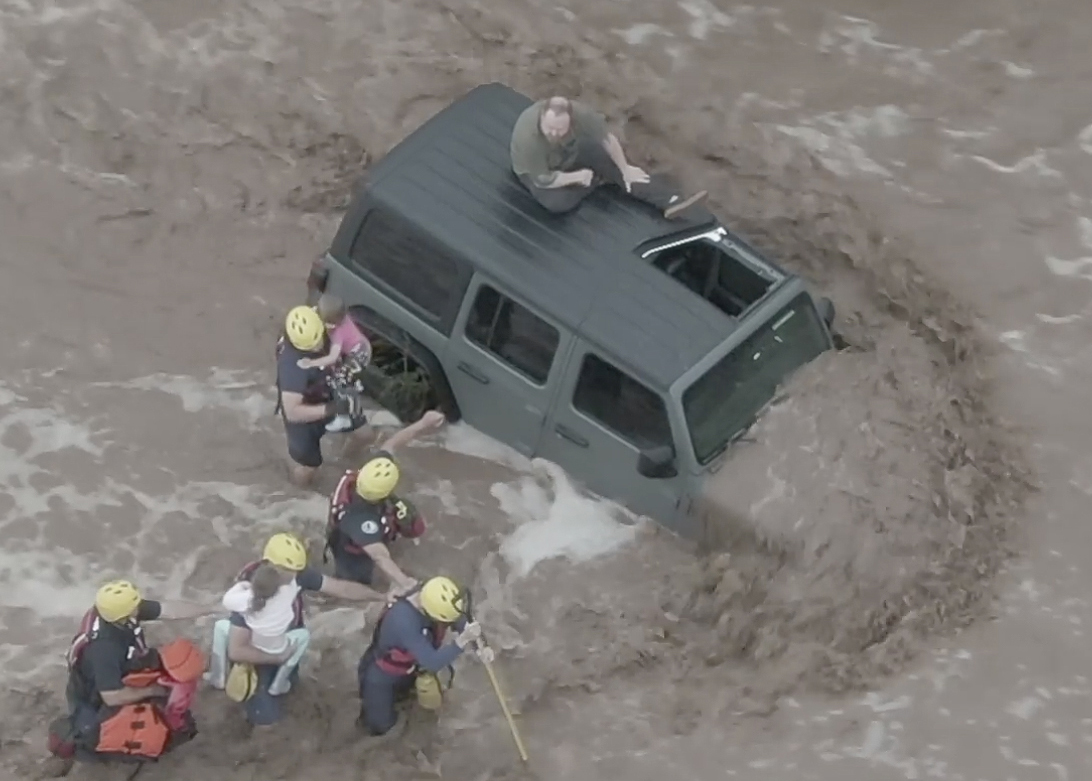 The strong storms and flooding, which is forecasted to continue over the weekend, have killed at least three invidious in the past month, including a person that died on Thursday during a Grand Canyon rafting trip.

In anticipation of more storms to come, Jarrold issued a message to all the residents.

"Our message, telling everybody, be patient, especially here in the desert,' he said. 'The water comes up quick, but it also goes away quick."

In Utah, three people were injured during a train derailment caused by flooded tracks on Thursday at 10.10pm, leaving crews working hard to clean up the railway according to the Gephardt Daily.

The three passengers were unable to evacuate the train because of the toppling rising storm waters.

First responders were able to get to the victims and transfer them to an area hospital in stable condition around 12.50am on Friday.

An individual went mission during a Colorado River rafting trip in the Grand Canyon and was found dead in freezing flash floods on Thursday.

This year, at least two others have died on Grand Canyon rafting trips.