THE milk crate challenge is the latest craze sweeping the internet and involves stacking crates into a staircase and walking up and down either side.

Sounds easy right? Well not judging by the number of videos showing spectacular fails as those rising to the challenge crash back down to earth. 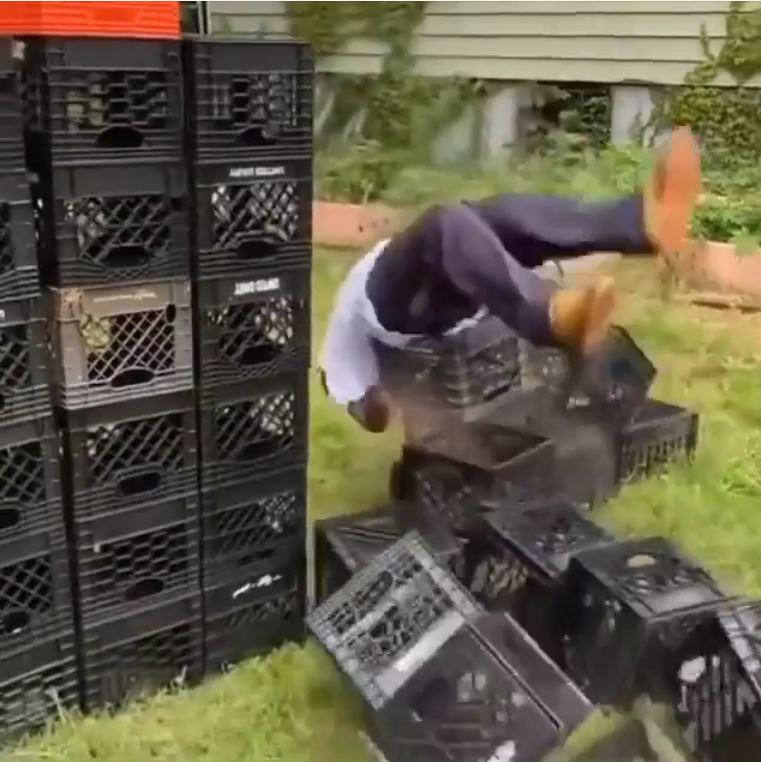 On paper the challenge seems simple– build up a stack of plastic milk crates into a staircase design and then just walk up and down the other side.

But it's not as easy as it looks as a number of social media users will testify.

Using the hashtag #MilkCrateChallenge the internet has been flooded on sites like Twitter and TikTok as people give it a go.

In one clip, a man is stuck balancing on the highest milk crate when a young boy kicks them down – sending the participant flying off and landing on his face.

Another shows one man wobbling uncertainly on the before crashing down to earth.

One man taking the challenge might feel a bit sore sitting down for a few days after slamming his backside into the crates when he fell off.

One participant takes a painful blow straight to the chest though still manages to walk away.

The milk crate challenge is not to be take lightly and any attempts to show off usually have a similar outcome.

Perhaps this man thought putting on a feathered outfit would help him. It didn't.

There have been the inevitable sprouting of memes around the challenge.

The wobbling around on the crates, usually placed on uneven grass, before face planting has become a common feature of the videos.

Some have been harking back to a simpler age when the crates were adapted for altogether less painful activity.

For others, the whole thing is getting out of hand.

The painful outcome for most taking part was inspirationfor this tweet.

Getting your insurance company to pay out might be the next challenge.

Has anyone died doing the Milk Crate Challenge?

There have been no reported deaths of anyone dying taking theMile Crate Challenge itself.

The people were allegedly shot dead as gunfire erupted while a group filmed a video in Shreveport, Louisiana,

The shooting reportedly erupted just after 5pm on Sunday outside of a school while a group of men was filming.