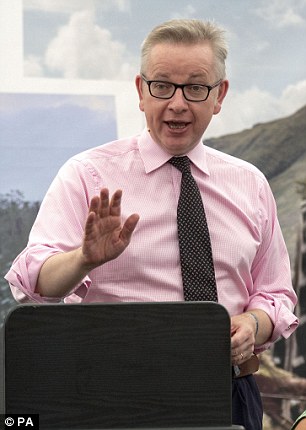 Michael Gove has discussed ‘parking’ Britain in the European Economic Area if Brexit talks fail this autumn, it emerged yesterday.

The former Vote Leave leader discussed the idea – which would involve the UK staying in the single market – at a private dinner with moderate Tories.

An account of the dinner, leaked to the Financial Times, said Mr Gove talked about a scenario in which the UK remained ‘parked’ in the EEA in order to prevent a no deal Brexit.

Mr Gove is said to have imitated the European Commission’s controversial top civil servant Martin Selmayr as he ran through various potential outcomes from the Brexit talks this autumn, including EEA membership.

One MP present at the meeting said: ‘He was steering the conversation towards the EEA idea. There’s no doubt about that.’

Allies of Mr Gove confirmed he had discussed the idea at a meeting of the ‘Green Chip’ group of Tories in June. But they insisted he was simply running through a range of potential scenarios, and said he was fully committed to Theresa May’s Chequers deal.

‘He wasn’t advocating the EEA,’ said one ally. ‘He’s totally behind the PM’s Chequers deal. He’s not considering any other option – he just enjoys discussing things.

‘Anyone who knows Michael knows he doesn’t want the EEA – he has never said that and he doesn’t think that.’

Some Tory moderates have advocated joining the EEA, like Norway, in order to prevent disruption to business while observing the letter, if not the spirit, of the 2016 referendum.

Stewart Jackson, who served as chief of staff to Mr Davis, mocked Mr Gove’s decision to even countenance the EEA yesterday

But Brexiteer MPs warn it would deliver ‘Brexit in name only’, with the UK required to accept free movement, contribute billions to the Brussels budget and accept EU rules, while having no say in them.

The Chequers deal prompted the resignations of Boris Johnson and David Davis.

But Mr Gove is said to have argued that the faults of the deal, which includes agreeing a ‘common rule book’ with Brussels on goods and services, could be returned to after the UK leaves in March next year.

Stewart Jackson, who served as chief of staff to Mr Davis, mocked Mr Gove’s decision to even countenance the EEA yesterday.

Commenting on Twitter, he said: ‘Gove on manoeuvres? Never! You could knock me down with an Aberdeen wet fish.’