Flight to salvation: Meet the Afghan interpreter who managed to flee to the UK… helped by the Angel of Kabul

For former Special Forces translator Nawaz, these remarkable photos document the fear that he might never leave the terror of Afghanistan – and his joy at finally arriving in Britain with his family.

Six days ago, he, his wife Nasrin, 29, and their five children were stuck in a sweltering crush of thousands at besieged Kabul airport.

But the family is now safe at a quarantine hotel in Manchester having arrived on Friday on what he called ‘an extraordinary, life-saving journey to the future’.

‘We are the very lucky ones,’ he said. ‘We watch the scenes in Kabul on TV and know many translators and others trapped in the heat and crush. 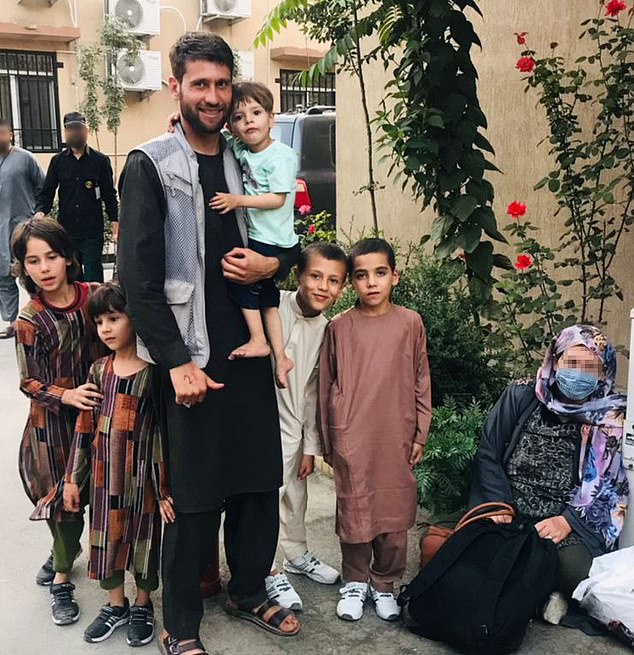 Nawaz with his wife and children still in Afghanistan, uncertain whether they’ll be able to get out

‘It is very dangerous. My brother is at the airport. The Taliban are calling him saying they are looking for me. They are taking people away and nothing is heard of them again. We flew just in time.’

During their last days hiding in Kabul as the Taliban swept in, the hazardous journey through insurgent checkpoints and then on to a packed RAF C17 cargo plane, he captured it all on his phone.

His pictures are the first taken by an Afghan fleeing their homeland and provide a graphic insight into the chaos at the airport and the life-saving British airlift. 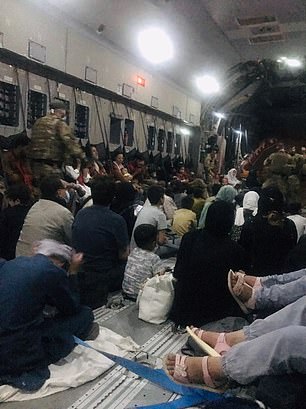 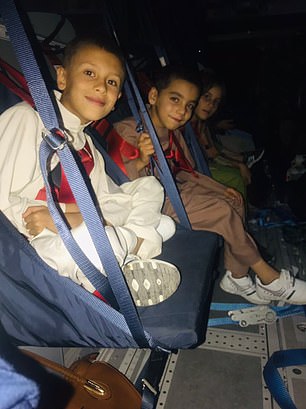 Abdullah, Mohammad and Zahra leave Kabul in a packed RAF C17, above. Nawaz – who worked for seven years with UK troops, including at Special Forces base Camp Juno – was given a place on a flight to Birmingham via Dubai 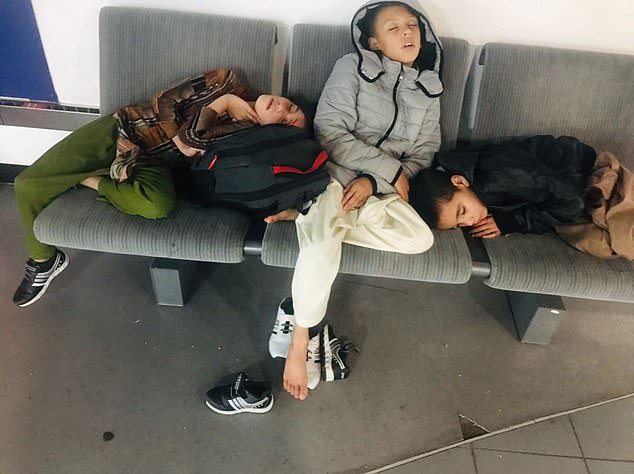 Exhausted, three of his children sleep at the airport en route to the UK

The man who helped UK Special Forces run intelligence-gathering operations continued: ‘It is wonderful to have escaped the horrors. We really struggled to make it. People have no idea how difficult and dangerous the situation is.

‘British soldiers are doing a very good job in incredibly difficult circumstances and we, who stood beside them when the Taliban attacked, recognise their support.’

Nawaz said they were summoned to the airport to catch a flight on Tuesday. But as they struggled to reach a rendezvous the Taliban opened fire to force people back.

He added: ‘There was absolute panic. People were on the ground – I saw some hit, maybe killed. My wife and children were screaming. So we went back, leaving all our clothes and belongings… to a half-built house with no water and no toilet where we had been hiding.’ 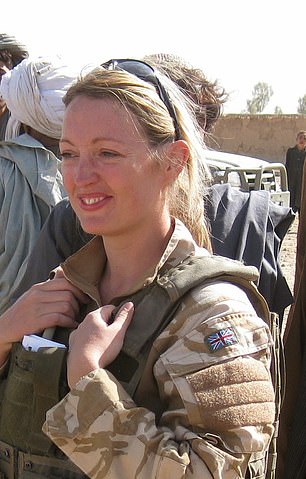 His former intelligence officer, Pam French – dubbed the ‘Angel of Kabul’ – convinced them in a call from her Welsh home

The next day, Nawaz – who worked for seven years with UK troops, including at Special Forces base Camp Juno – was given a place on a flight to Birmingham via Dubai.

But British soldiers still weren’t sure he had the right paperwork. Luckily, his former intelligence officer, Pam French – dubbed the ‘Angel of Kabul’ – convinced them in a call from her Welsh home.

He said not all were so lucky, adding: ‘In the chaos some left family members – wives split from husbands, children from mothers.’ Now in the UK with Nasrin and Abdullah, nine, Zahra, eight, Mohammad, seven, Ayesha, six, and Shukria, two, he added: ‘It is wonderful to feel safe. But we have spoken to our parents in Afghanistan. The situation is becoming worse. We worry what will happen.’

He was able to flee after his case was highlighted by the Mail’s Betrayal of the Brave campaign.

His application was refused because he had worked for a contractor, not the Government. But this was reversed when the relocation policy was relaxed.