MEGHAN MCCAIN: Hold your kids a little tighter as you look at the images of horror in Ukraine and ask yourself: Do you truly appreciate your American liberty, can you say that you too would fight to keep it?

It is hard to fully process what is happening in Ukraine. It is a hellscape, as all war is, but as is now common in modern conflicts – that hell is being broadcast in nearly real-time on social media.

It is a literal live Twitter feed of the worst atrocities that mankind is capable of committing against one another. It adds an extra layer of anxiety and terror every time we click refresh.

What Putin is doing very well may prove to be one of the worst modern examples of war crimes.

The Hague’s chief prosecutor at the International Criminal Court has announced that he plans to open an probe into possible crimes against humanity ‘as rapidly as possible.’

Since the war between Russia and Ukraine started a week ago we have seen footage of children’s hospitals, orphanages and schools being bombed. Huge sections of beautiful, extravagant cities have been reduced to rubble, death, destruction and worse.

Russian troops have reportedly killed hundreds of civilians, including more than a dozen children.

We have also seen great displays of heroism from Ukrainian President Zelensky — a man who will go down in world history for his extreme bravery for his refusal to abandon his people.

The actor-turned-president has chosen to stay and fight despite having the opportunity to flee and the offer of a ride out of his country by our own President Biden.

We have also seen the world champion boxer and Mayor of Kyiv, Vitali Klitschko, as well as his brother Wladimir (also an ex-superstar boxer) take up arms and join the rest of the Ukrainian forces to defend their country. 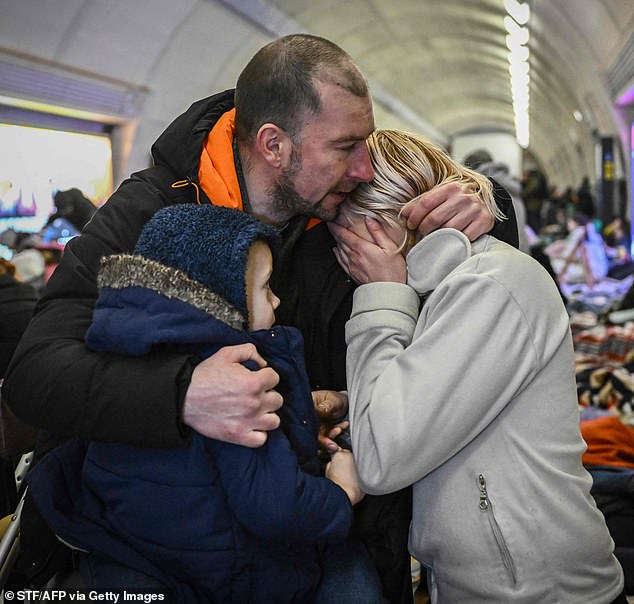 As another country goes to war – remember what we have to be appreciative of and why it is worth fighting for. (Above) Ukrainian family hugs in an underground metro station used as bomb shelter in Kyiv on March 2, 2022

These men are internationally famous athletes and millionaires several times over, they do not need to do this. It is also reported they are on Putin’s top ‘kill list.’

Maybe even more impressive, we have seen exemplary profiles in courage from average Ukrainian people, who are joining up to fight.

Social media is filled with videos of people making Molotov cocktails on street corners. In another viral video, a women appears to throw a flaming bottle from her car at Russian military vehicle.

All of it is extraordinary and gut wrenching to watch unfold on the world’s stage.

I have found myself, like so many others, having a hard time focusing on anything else in the news or in my personal life.

All of it feels completely overwhelming because there is little the general American public can do other than show support on social media and in our communities at protests and rallies.

We can also donate to humanitarian and refugee aid for the Ukrainian people. We can call our representatives in Congress and demand action, but overall, the situation feels simultaneously dire and completely out of control.

I have found myself fielding calls and text messages from friends and family only half-jokingly discussing where this escalation could lead.

At the top of concerns from my friend group are worries about this being the beginning moments of World War III and the potential of a nuclear bomb being dropped. 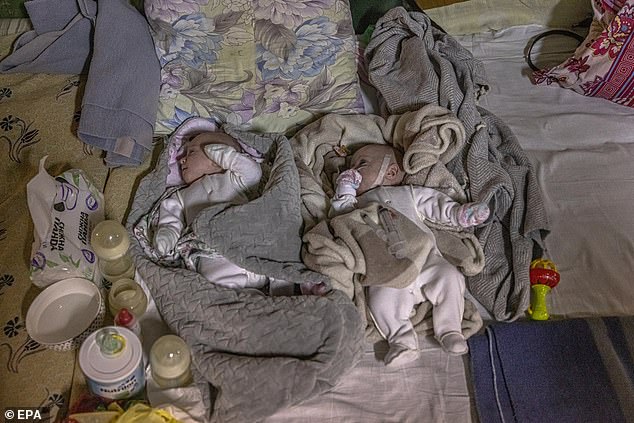 Russian troops have reportedly killed hundreds of civilians, including more than a dozen children. (Above) Premature babies in Ohmadyt children’s hospital basement used as a shelter for protection against airstrikes, in Kyiv on March 1, 2022

People are justifiably very, very nervous as to what comes next.

If there is one thing the horror in Ukraine and the tyrannical oppression from Putin can teach us though, it is that America, our democracy and liberty, are truly unique and special and worth fighting for.

I have found myself this past week — even more so than normal – feeling extremely grateful to live in a country that is truly free.

We have autonomy as a sovereign democracy. We vote in free and fair elections. We have freedom of speech, freedom of the press and we don’t live under the immediate existential threat of a looming fascist dictatorship threatening to invade us at any moment.

We are not thrown in jail for speaking out against our president, as they are in Russia. We are not handed state-mandated propaganda. We have freedom on the internet with social media, and so many other blessings that come with the liberty of the West that I can’t possibly list them all here.

But we must remember that these freedoms are not guaranteed.

We must always remember President Ronald Reagan’s warning: ‘Freedom is never more than one generation away from extinction.’

Our elections are free, but forces in our society – from both the left and the right – seek to undermine our faith in the integrity of the ballot box.

Social media censors ban and block opinions and convenient facts that they don’t like.

In Canada, truckers protesting the Ottawa were dragged off the streets after the government declared unprecedented emergency measures. In America, some of the most liberal among us cheered them on.

The rising threat of Communist China is an obvious challenge to our futures, but America and the West have not fully come to grips with the danger.

Seeing so many Ukrainians willingly take up arms for a cause greater than themselves has been heart-wrenching, but also inspiring. 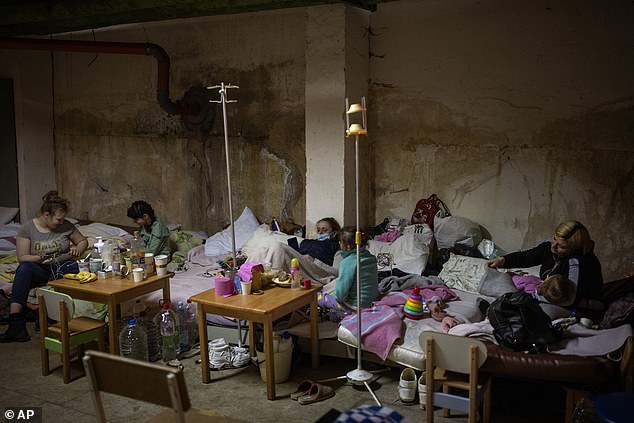 See these images up close, no matter how hard it is to look at them. (Above) Sick children and women with their newborn babies stand at a basement used as a bomb shelter at the Okhmadet children’s hospital in central Kyiv, Ukraine on March 1. 2022

That said — it has also been hard to see so many here in the West take a callous and disconnected view of the atrocities being committed against innocent Ukrainians. Quite a few notable people in the commentary class keep echoing that this shouldn’t be our problem.

But this is an opportunity for Americans to put themselves in the shoes of a Ukrainian mother huddled with her infant daughter in a subway that has been turned into a bomb shelter.

Imagine themselves as the parent whose premature baby is being tended to in an underground ad hoc ICU.

As another country goes to war – remember what we have to be appreciative of and why it is worth fighting for.

Censorship, dislike for political opponents, intolerance for one another’s ideas is too rampant in our society. Remember how lucky we are and how precious and fragile freedom really is.

See these images up close, no matter how hard it is to look at them.

Realize what we have and how many billions of people on the other side of the world are willing to die for what we so easily take for granted.

Hold your kids a little tighter.

Speak more kindly to your neighbor.

Take time to appreciate that while Americans may not always agree – the cultivation of a strong and vibrant democracy is in all our best interests.

And pray for Ukraine.