May claims victory with new Brexit pact that says the UK WILL be able to strike its own trade deals, end free movement and technology COULD prevent the Irish border backstop 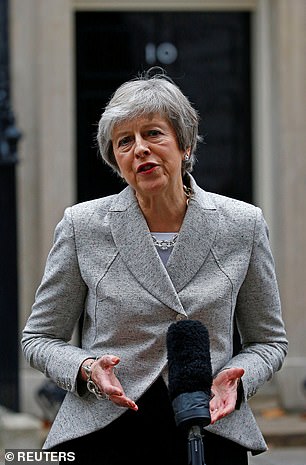 Theresa May has secured agreement with the EU on the second half of her Brexit deal and delivered a political declaration which sets out the options for the UK’s future relationship with Brussels.

The PM was under massive pressure from Tory Brexiteers to come back with major wins in order for it to stand any chance of getting it through Parliament alongside the full blown divorce treaty.

Here are some of the key points in the document:

This is the crunch issue in the talks. The UK has committed to keeping Britain in a customs union backstop if no free trade deal is done in time which keeps the Irish border soft.

This has sparked Brexiteer fury, and leading Tory Eurosecptics Iain Duncan-Smith and Owen Paterson have held private meetings with the PM to press her to change the plan.

The document tries to calm Brexiteers by stating that both sides have restated their ‘determination to replace the backstop solution on Northern Ireland by a subsequent agreement that establishes alternative arrangements for ensuring the absence of a hard border on the island of Ireland on a permanent footing’.

In a concession to the UK, the EU appears to have conceded Britain must be able to pursue its own trade deals.

The document states: ‘It must also ensure the sovereignty of the United Kingdom and the protection of its internal market, while respecting the result of the 2016 referendum including with regard to the development of its independent trade policy and the ending of free movement of people between the Union and the United Kingdom.’

But it does little to flesh out the details.

Both sides have stressed their commitment to a new free trade a deal.

But Brexiteers have already erupted in fury as the document suggests the future deal will look a lot like a customs union.

The document states there will be ‘deep regulatory and customs cooperation’.

Fleshing out what a future trade deal will look like, it states: ‘The economic partnership should ensure no tariffs, fees, charges or quantitative restrictions across all sectors’.

It says the two sides should have ‘ambitious customs arrangements that, in line with the Parties’ objectives and principles above, build and improve on the single customs territory’ in the divorce deal.

Free movement of people from the EU will end.

But the document suggests high levels of EU immigration to the UK is set to stay as new routes to settle in Britain are set up.

The UK has agreed to consider letting EU nationals move to the UK for research, study, training and youth exchanges.

And it says both sides will explore how to open borders for ‘legitimate travel’.

But immigration after Brexit from EU states must be ‘based on non discrimination’ – this effectively means the UK must have the same immigration rules for each of the 27 countries, rather than negotiating different ones state by state.

There will be visa free travel for short term trips by EU nationals and vice versa. 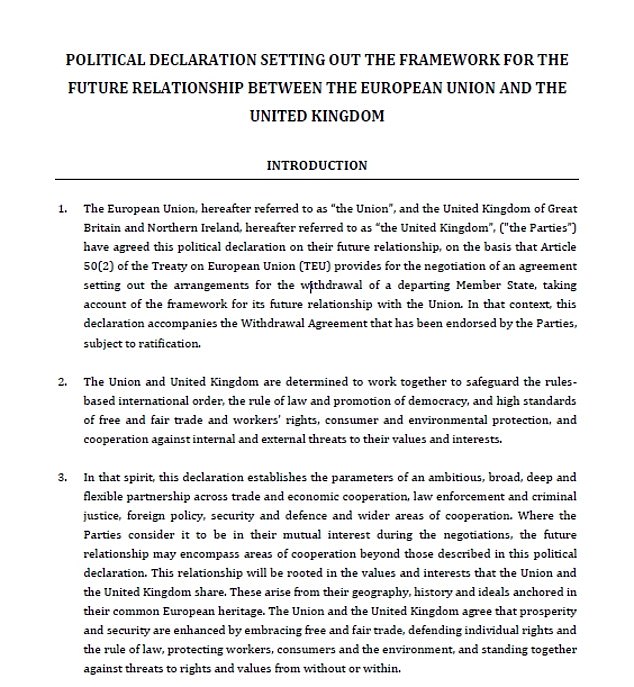 Britain could still pay benefits to EU nationals after Brexit, and vice versa.

The document states: ‘The parties also agree to consider addressing social security coordination in the light of future movement of persons.’

Talks on what access the EU will have to fish in Britain’s waters after Brexit have been delayed. It says the deal should be agreed by 1 July 2020.

The document states: ‘Within the context of the overall economic partnership the Parties should establish a new fisheries agreement on, inter alia, access to waters and quota shares.’

This has sparked massive alarm among fishermen and Brexiteers that EU will be given rights to fish in UK waters even after Brexit.

Tory MP and Brexiteer Ross Thomson lashed the proposal, warning it means ‘sovereignty over our waters sacrificed for a trade deal. That is unacceptable.’

The two sides have also agreed to cooperate on deciding fishing quotas in the future.

The document states that ‘the United Kingdom will be an independent coastal state’ – but it is doubtful this will do enough to appease the Brexiteers.

EU judges will still have a role in formulating laws in Britain after Brexit – but it will be far less than they have now.

Britain and Brussels have agreed to set up a disputes panel which will have officials from Britain, member states and an independent country on each case.

While EU judges will not sit on the panel, when disputes concerns areas of EU law, judges in Brussels will be consulted on the meaning of this law.

The UK and the EU have pledged to ‘consider appropriate arrangements for cooperation on space’.

This comes in the wake of a major over the Galileo satellite programme, which the EU has threatened to boot Britain out of despite the country sinking many millions into the project.

What is the Brexit Political Declaration, what does it change, and what happens next?

Q: What is the Political Declaration that Theresa May has agreed with the EU?

A: The document is a series of commitments on the future relationship the UK will have with Brussels after Brexit. It is simply a political declaration and has no legally binding weight in and of itself.

Q: How is it different from the EU Withdrawal Agreement agreed last week?

A: The Withdrawal Agreement runs to 585 pages covers the UK’s divorce from Brussels – so areas such as the amount of money the UK will pay the EU, the rights of EU nationals in the UK after Brexit and vice versa, and what happens to the Irish border if a free trade deal is not done in time.

In stark contrast to the Political Declaration, it is a legally binding document.

Q: What areas does the Political Declaration cover?

A: The declaration includes immigration, fishing rights, trade policy, cooperation on security, and how disputes between the UK and EU will be settled after Britain quits the Brussels bloc and with it the European Court of Justice.

Q: What has changed from the draft Political Declaration last week?

A: Today’s Political Declaration runs to 26 pages – far longer than the 7-page draft which was published last week. It includes extra clauses which stress commitments to try to use technology and a free trade deal to keep the Irish border soft, rather than relying on the controversial backstop which would keep the UK tied to an EU customs union.

Q: Why are Brexiteers angry at the deal?

A: Furious Tory Brexiteers have lined up to condemn the document. They say that new clauses on using technology to keep the Irish border soft are toothless because they are not in the Withdrawal Agreement, which is the document which dictates the terms the UK  leaves the EU on.

They have also accused the PM of betraying fishermen by agreeing to do a new deal with the EU which could see European countries given rights to fish in Britain’s waters.

Q: Why are Remainers angry at the deal?

A: The PM is also facing a barrage of attacks from Remainers, who say that the deal is not as good as staying in the EU and are pushing for another referendum which could see the Brexit result overturned.

Q: What happens to the Political Declaration now?

A: MPs will vote on the Political Declaration along with the EU Withdrawal Agreement in Parliament next month. But the PM is facing overwhelming opposition from rebellious Tory Brexiteers, Labour, the DUP and the SNP. In the face of this barrage of attacks, the Brexit deal is expected to be voted down.

Q: What happens if the Brexit deal is voted down?

A: Theresa May would probably go back to Brussels and try to negotiate further – perhaps getting more guarantees in the political declaration and concessions in the Withdrawal Agreement. But it remains to be seen if the EU would be willing to  change the document.