Paris: If European citizens were asked which country currently holds the presidency of the Council of the European Union, chances are many wouldn’t be able to name the correct member state. (The answer is Slovenia.)

But when France assumes the rotating presidency on January 1, President Emmanuel Macron wants to make sure Europeans know who’s in charge — or perhaps, who would like to be.

He laid out bold ambitions for the presidency on Thursday in a two-hour news conference that touched on nearly every issue central to the future of the 27-nation bloc and its 440 million residents. His aim, he said, was to transform the bloc into “a Europe that is powerful in the world, fully sovereign, free in its choices and master of its destiny”. 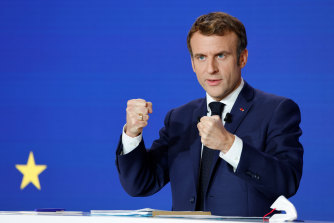 He said the slogan chosen for this period would be “relaunch, power and belonging”.

At times, his remarks resembled a reelection pitch aimed at French voters. And it would not have been lost on anyone listening that France’s sixth-month term overlaps with the country’s presidential election in April.

Macron has not officially declared his reelection bid — and he refused to say anything about it on Thursday — but he is widely expected to run. The EU presidency could give him a way to present himself as Europe’s de facto leader in the final campaign stretch. It is also possible that he may no longer be the French President by the time the EU term ends.

Macron proposed several changes on several topics at his press conference — including border security, Europe’s social model, climate action and economic growth. But it remains unclear how far he will get implementing those efforts.

The rotating EU presidency does not bring with it much power. To the extent that it raises a country’s profile, that may matter more to places such as tiny Luxembourg, with its 630,000 people, than to France, with its population of 67 million and far greater economic clout.

And while it enables some agenda-setting, agendas can get quickly bogged down by competing national interests and complex bureaucratic processes.

France will assume the presidency at a time when the EU faces numerous challenges. The coronavirus pandemic has deflated member states’ budgets and continues to take a heavy toll, particularly in Europe’s least vaccinated countries, where death rates have spiked again. Meanwhile, tensions with Russia and China could force the EU to toughen its foreign policy, which has often been a careful balancing act between economic interests and human rights concerns. 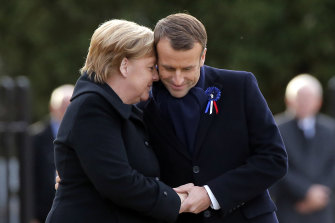 Macron has made clear that he would like to inherit Angela Merkel’s role as the most powerful leader in Europe. Credit:AP

Macron has proposed a reaction force that would assist EU nations in migration emergencies — something that has gained some traction since Belarus opened routes for migrants to reach EU borders in retaliation for European sanctions. Macron also wants to revisit the Schengen system, which enables Europeans to cross borders without checks.

Those proposals were probably aimed at migration-sceptical nations, largely in the east, as well as a domestic audience.

The presidential candidates polling second and third behind Macron — Marine Le Pen and Éric Zemmour — both represent the far-right and are running on anti-immigration platforms. Many on the right see Macron as having been too soft on migration, even though left-wing critics say his government’s crackdowns on migrants have gone too far.

Macron weighed in on a range of other issues that have captured the public’s attention in recent months, including the country’s numerous disputes with post-Brexit Britain.

“I love Great Britain. I love its people,” Macron said. “I really crave a government that just wants to work in good faith with us.”

He also indicated an interest in expanding pandemic-related economic stimulus measures. A number of countries, including neighbouring Germany, have been sceptical of such measures.

Merkel long dominated European politics. Macron’s hopes to lead the EU into a new chapter may now also rise, or fall, depending on her successor’s ambitions and sway.