‘If you treat us like animals, we will act like animals’: Masked man’s chilling warning to ‘police, politicians and society’ just one hour before dozens of cars were fire bombed across Sweden

A video showing a masked man issuing a threat to ‘police, politicians and society’ was sent to Swedish media just one hour before youth gangs launched arson attacks across the country this week.

The masked man warns that ‘if you treat us like animals, we will act like animals’, in the clip received by newspaper Expressen on Monday evening.

More than 100 cars burned in several cities, including Stockholm, Gothenburg and Malmo, as gangs went rampaging in a series of firebombings believed to have been coordinated on social media. 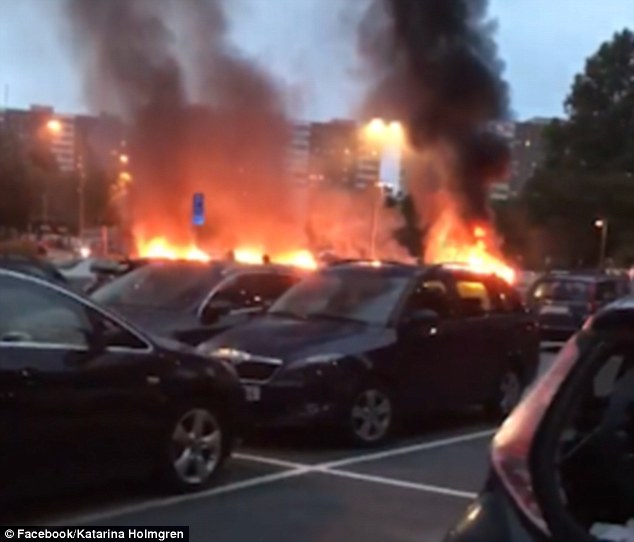 The masked man in the video, not pictured, sends a warning to ‘police, politicians and society’ that there will be retaliation for measures taken by authorities to crack down on criminal gangs

The video was sent to a photographer working for Expressen, one of Sweden’s most prominent newspapers, after telling him ‘something big’ was going to take place in Gothenburg.

Less than an hour later, cars were burning in the city’s southeast suburb of  Västra Frölunda, and later all over the Scandinavian nation.

In the video, the man says he wants to send a ‘message to the police, the politicians and society’.

He claims ‘brutal’ police are harassing people for no reason, and that social services are tearing children from their families.

He also says that it is unfair that CCTV is now being put up in poor areas of the suburbs, but not in rich areas’.

‘Treat us like animals and we will act like animals. This is not a threat, but just to awaken society.’ 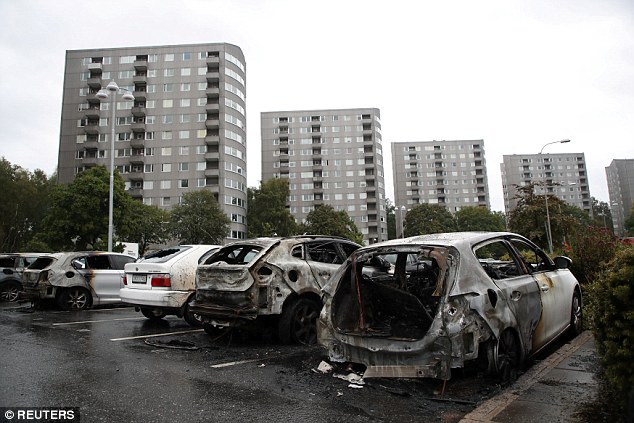 Damage: Burned cars are pictured at Frolunda Square in Gothenburg, Sweden, the morning after a series of coordinated arson attacks 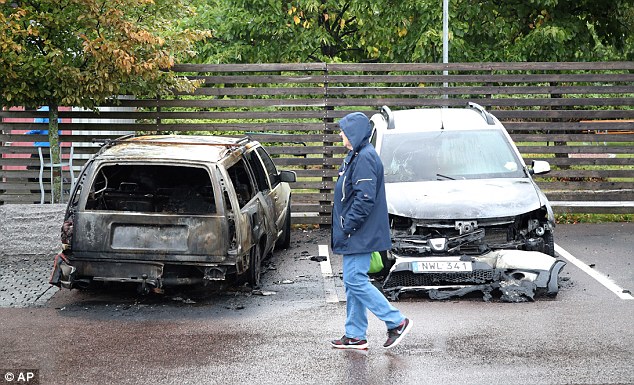 Multiple targets: A person walks past burned cars parked at Frolunda Square in Gothenburg, after a night when cars burned in all Sweden’s major cities, including Stockholm and Malmo

The ‘issues’ raised in the video is likely to be an interpretation of measures taken by local police to crack down on criminal networks, such as targeting known gang affiliates and putting up security cameras in areas where drug dealers are known to operate.

Gothenburg prosecutor Mats Ihlbom told Expressen that one of their theories are that the firebombings were triggered by this.

‘One of our hypotheses is that this is a reaction to the police’s work to combat criminal activity.’

This comes after three arrests were made in connection with the incidents, including one in Turkey of a 19-year-old man who had fled Sweden after the arson attacks.

A number of boys under the age of 15 have also been apprehended, but have due to their young age been released into the care of their parents.

Police believe the attacks across the country were co-ordinated over social media, using messaging apps such as WhatsApp or similar. 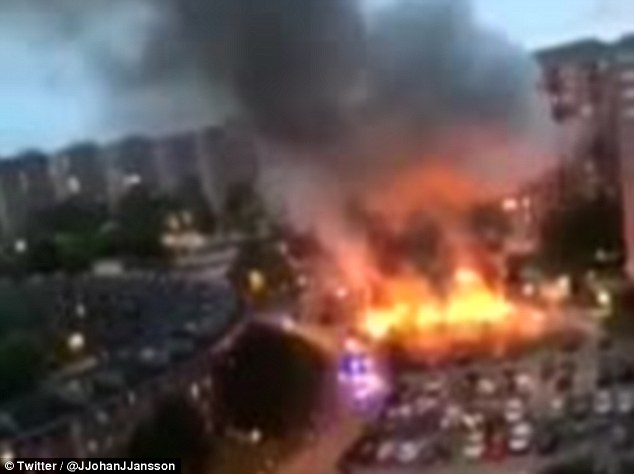 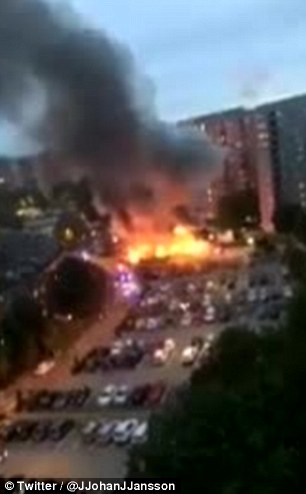 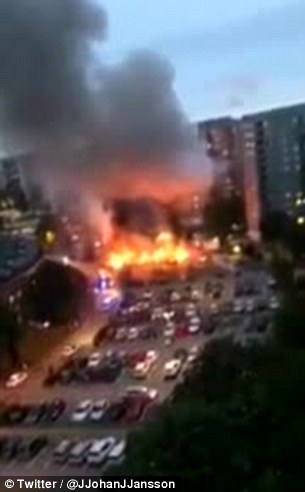 Police said they were dealing with fires at a car park near a shopping centre and specialist hospital at Frölunda Torg, south-west of Gothenburg. 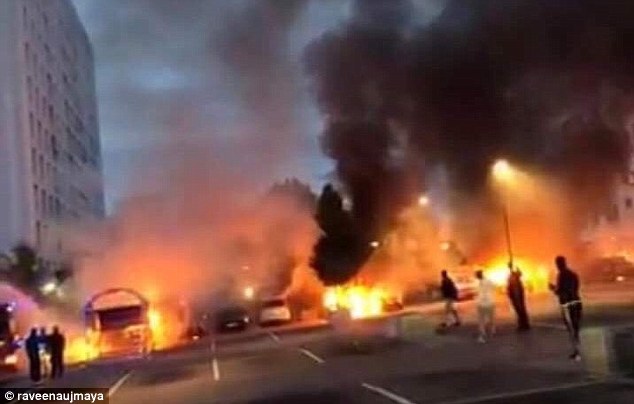 Around 60 vehicles had been vandalised in total, Swedish television reported, with stones also thrown at police by masked men

In the wake of the fires, Swedish Prime Minister Stefan Löfven reacted with anger and did not hold back during a radio interview on Tuesday morning.

‘I’m furious, for real. My question to these people is ‘what the f*** are you doing?’,’ he told Sveriges Radio P1. 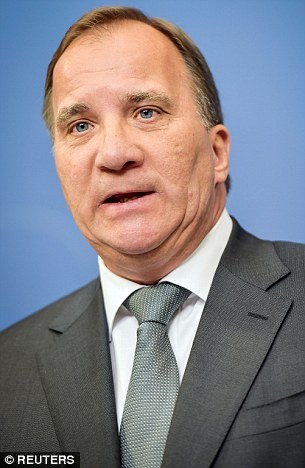 ‘What the f*** are you doing?’: Prime Minister Stefan Lofven reacted with anger

‘You’re ruining things for yourselves, your parents and your neighbourhoods,’ Lofven said, adding the incident ‘looked very coordinated, almost like a military operation’.

‘Sweden has tolerated this for too long. This must end now,’ Ulf Kristersson, leader of the conservative opposition party, the Moderates, wrote on his Facebook account.

In Gothenburg and surrounding towns of Lysekil, Falkenberg and Trollhättan, a total of around 100 cars were been demolished between Monday and Tuesday.

In Stockholm, and Uppsala, some 45 miles north of the capital, a total of 13 cars were set alight in a handful locations on Tuesday morning.

All culprits in the attacks have been described by witnesses as wearing dark clothing and hoods.

The area around Frölunda Torg have seen several deadly shootings in the past two years as local gangs have been at war over drug trade in Gothenburg.

Due to the criminal gang activity and shootings, Vastra Frölunda was last year deemed as one of the more violent areas in Sweden’s second largest city.

The two people arrested Tuesday, aged between 16 and 21, are both from Vastra Frölunda. 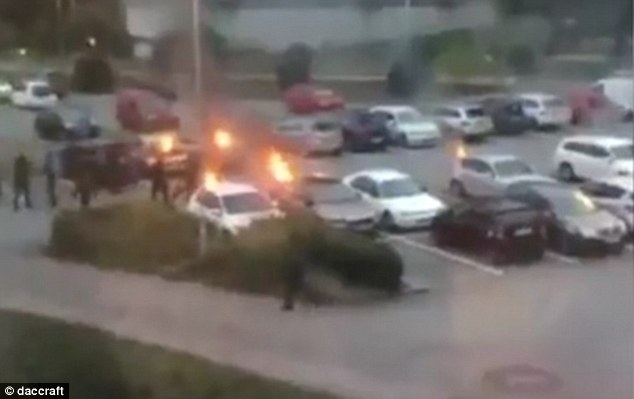 The largest group of youngsters apparently gathered in Kronogården in Trollhättan north of Gothenburg where as many as 40 people threw stones and started fires.

Kronogården has also seen a rise in gang violence in recent years.

It made international news in 2015, when 21-year-old Anton Lundin Pettersson killed three people at a local school, in a racist attack targeting Kronogården due to its high immigrant population.

The violence comes just three weeks before Swedish voters go to the polls in a general election.

Systematically setting cars on fire has become a associated with gang violence in suburbs in Sweden’s major cities.

Last year, 1,457 cars were ‘deliberately’ set on fire across Sweden, compared to 1,641 in 2016, according to the Swedish Civil Contingencies Agency’s figures.

Last year in February, two days after US President Donald Trump’s baffling comments linking crime to immigration in Sweden, riots broke out in the immigrant-heavy northern Stockholm suburb of Rinkeby.

Dozens of youths clashed with police after they arrested a suspected drug dealer in Rinkeby. The rioters threw stones at police, burned cars and looted shops.

Asymptomatic coronavirus cases may be more common than suspected

Will the X-Men or the Fantastic Four Join the MCU First?

We will use your email address only for sending you newsletters. Please see our Privacy Notice for details of your data protection rights. The US…

The number of “secret” coronavirus carriers — people displaying no symptoms — could be much higher than previously thought, according to new research. Researchers in…