A Marine accused of deserting his post and killing his mother's boyfriend has been added to the FBI's Most Wanted list as authorities continue a manhunt for him.

A $10,000 reward is being offered by the U.S. Marshals Service for information leading to the arrest of Cpl. Michael Alexander Brown.

Brown, 22, failed to report for duty on Oct. 24 at Camp Lejeune in North Carolina and was declared AWOL the next day. The combat engineer was classified as a deserter days later when he was named a suspect in the Nov. 9 slaying of his mother’s boyfriend, 54-year-old Rodney Wilfred Brown. 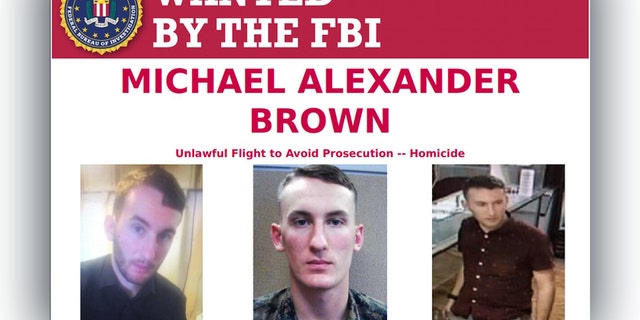 Marine Cpl. Michael Alexander Brown was added to the FBI Most Wanted list. Brown is suspected in the death of his mother’s boyfriend, Rodney Wilfred Brown.
(FBI)

Several agencies in North Carolina and Virginia — in addition to the U.S. Marshals, the FBI and the Naval Criminal Investigative Service (NCIS) have been conducting a manhunt.

The Franklin County Sheriff’s Office in Virginia has issued an arrest warrant for second-degree murder for Brown and use of a firearm in the commission of a felony.

Authorities said he fled Virginia after the killing and returned days later. A black Lincoln Town Car was driving was found in South Carolina earlier this month.

Schools in Roanoke, Va., Brown's home of record, were put on lockdown after a sighting of the Marine in the area was reported on Nov. 13. Brown's mother has pleaded for him to turn himself in and said she has hired a lawyer for him.

He deployed to Africa between March and October 2018, but Camp Lejeune was only duty station.

A Facebook group in support of Brown had nearly 1,150 members as of Monday Night, the Marine Times reported.

"Anyone who supports Michael Brown and believes he is innocent and wants to wish him well in this chaos here is a place to do that not sure if hell see it but …Marine you did well now keep up the safe travels well be praying for you," the page states.