A man has been spotted grappling with a snake while riding a mobility scooter on a street in south London.

Twitter user David Videcette spotted the unusual character clutching the snake by it’s tail as he rode along the pavement on the Christchurch road on Streatham Hill.

The man appeared to be unfazed by the confused looks from bemused passers-by.

Videcette tweeted a picture of the man and captioned it: ‘Just some guy on a mobility scooter, grappling with a snake, as he makes his way along a south London street…’ 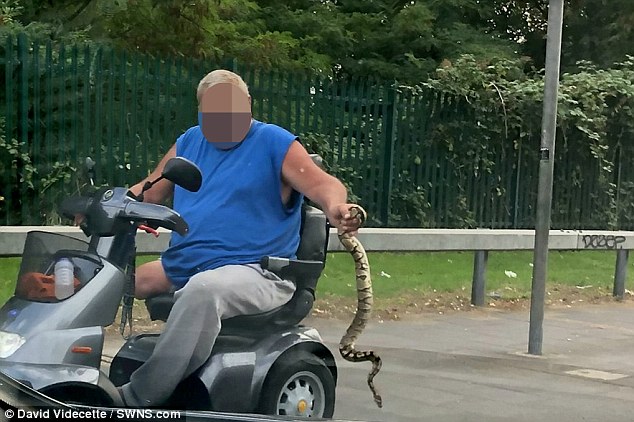 The tweet has racked up hundreds of shares and comments with some social media users saying the scene was ‘not unusual for south London’.

One social media user wrote that the scene was typical for south London.

One wrote: ‘Standard south london. In last few weeks have seen snake, ferret, bearded dragon and macaw all just hanging out with their people on high streets or cafes.’

Another commented: ‘Occasionally I used to see a chap who travelled on the south London train network with a live snake coiled upon his head.’

One quipped: ‘Having grown up in South East London I find this strange but have probably seen stranger things…’ 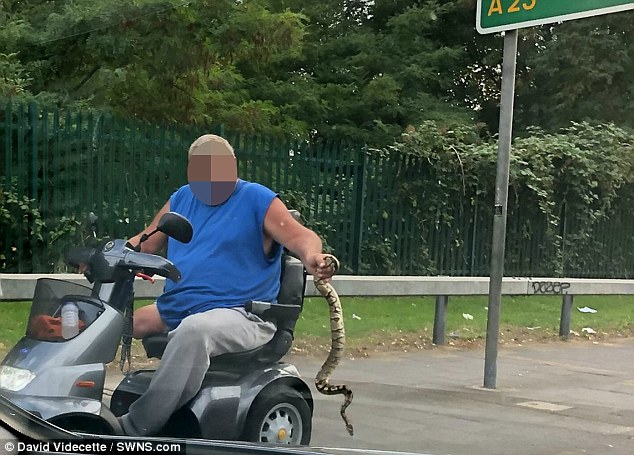 Others commented that the man is well-known in the area.

One wrote: ‘Wow, I have seen that guy in near Hillside gardens in Streatham. I was with my kids but no matter how hard I try I can’t construct a sentence that has the words kids, man and snake without it sounding all wrong .’

Some users recognised the man and have seen him in the area before. A man wrote: ‘I’ve met this guy down Hillside park in Streatham couple of times’

‘I’ve met this guy down Hillside park in Streatham couple of times,’ wrote another.

Vidacette, originally from south London, said that he was ‘amazed’ by what he saw.

And another posted a story about seeing another eccentric carrying a snake around, this time coiled around his head 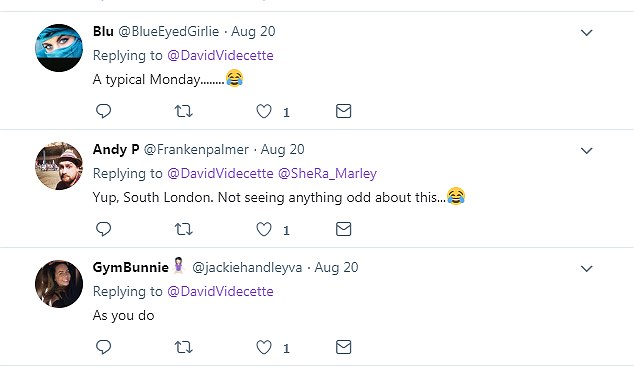 The former counter-terror detective, told the Evening Standard: ‘I come from south London and we have an odd and eclectic bunch in this part of the world, and seeing this man was perfect. It was like something out of an art gallery – I felt like nothing was as it should. It belonged in the Tate Modern.’

He continued: ‘There’s lots of weird and wonderful characters. It’s what makes south London so amazing.’