A man in his 40s has told police he was pushed to the ground and raped near a nature reserve.

Cleveland Police are investigating after the alleged attack at around 7.30pm on Thursday on the walkway known as the black path which runs from Tees Barrage to Newport bridge in Middlesbrough.

Police have said the male victim told them he was walking along the path near to Maze Park Nature Reserve when he was approached by a male, pushed to the ground and raped.

The suspect is described as black, aged in his late thirties, around 5ft 10′ tall, of stocky build with short, black hair and a prominent gap between his front upper teeth. 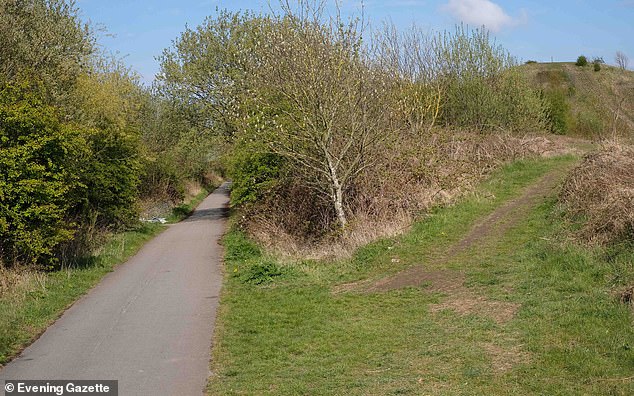 Cleveland Police are investigating after the alleged attack at around 7.30pm on Thursday on the walkway known as the black path (pictured) which runs from Tees Barrage to Newport bridge in Middlesbrough

He was clean shaven and spoke English but was not fluent. He was also wearing dark clothing.

Officers believe that two women may have been in the area around Newport Bridge and seen a distressed male.

Police are asking the women to come forward and contact them, as they say they may have information which could assist the investigation. The two women are described as being aged in their thirties and one with blonde, curly hair.

Detective Sergeant Iain Pearson said: ‘We are investigating a report of rape which happened around 7:30pm on the black path running from Tees Barrage to Newport Bridge, near to Maze Park Nature Reserve.

‘All reports of rape are taken extremely seriously. Specially trained officers are supporting the victim and we are following up a number of lines of inquiry.

‘Neighbourhood officers will have a high-visibility presence in the area for reassurance and anyone with concerns can approach those officers and speak with them.

‘I would appeal to two women who may have been in the area around Newport Bridge at approximately 7:30pm last night, who may have seen a distressed male, as they may be able to assist our investigation.’

A spokesperson for the force added: ‘Any witnesses or anyone who may have information regarding the incident or the person responsible is asked to contact Cleveland Police on 101, quoting incident number 068313.

‘Independent charity Crimestoppers can be contacted anonymously on 0800 555 111, or online at www.crimestoppers-uk.org.’