The unnamed patient, who is in his 20s, enlisted the help of the ear, nose and throat specialist after experiencing a “crawling sensation” and constant itching.

Doctor Zhang Pan, with the Affiliated Hospital of Yangzhou University in East China’s Jiangsu Province, then used a small camera to find the cause.

The horrifying footage shows a tiny white spider being housed by its comfy web.

Zhang attempts to remove it using a pair of tweezers, but the scurrying animal proves too small and quick for him.

He reaches into the patient’s ear with a needle and then fills his ear canal with a few drops of saline.

The panicking spider is very quickly driven out by the presence of liquid in its otherwise warm and cosy den.

Zhang did not reveal whether they killed the spider or let it live.

“I didn’t notice it when inspecting [his ear] with the naked eye,” Zhang later said. 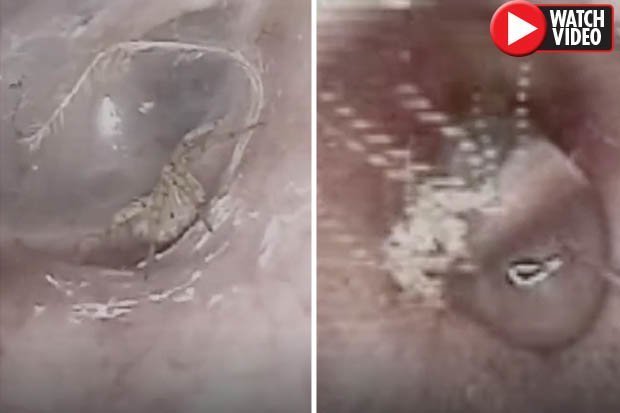 “However, using an endoscope, I discovered the small spider inside.”

Zhang has advised members of the public to seek immediate medical attention if they find an insect or spider in their ear.

Though there are methods to remove the pests – such as using a torch to draw out mosquitoes and moths or drowning the creepy-crawly in oil.

But the safest way to remove such critters is to visit a doctor, Zhang added.

It’s not the first time a creepy video of a spider has emerged.

One video caught the moment a spider exploded with babies during a fight.