I was charged for ‘spending three minutes’ in a private car park – I’d rather go to prison than pay: Motorist racks up £2,000 battling firm after getting billed despite ‘not even entering a space’

A motorist who was charged for ‘spending three minutes’ in a privately owned car park ‘despite not entering a space’ has racked up £2,000 battling the fee – and says he would rather go to prison than pay.

Jed Dalton drove into the lot on Jubilee Road in Wadebridge operated by I Park Services Ltd but says he was ‘not in a paid parking space.’

Mr Dalton says the bill was incurred during a family holiday in Cornwall in August 2021 when he stopped to look at the terms and conditions of the car park.

He has since had a county court judgement filed against his name and has racked up £2,000 trying to fight the fines – but says he would rather go to prison than pay the charge ‘on the point of principle’. 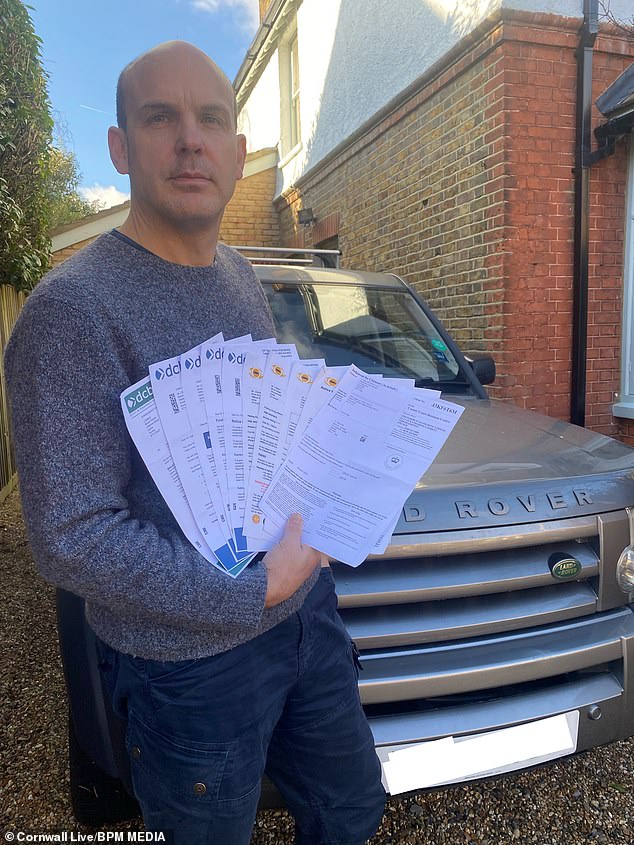 Jed Dalton, 50 from Esher, Surrey says he entered a privately owned car park when he was hit with a fine by I Park Services, even though he did not enter a parking space

He told Cornwall Live: ‘Unfamiliar with the area and car park, I stopped, not in any parking space, exited my vehicle and consulted the local signage to understand the regulations in effect.

Who can issue parking tickets and what are my rights as a UK driver?

Members of the public are not legally allowed to issue fines to other motorists even if they are parked illegally.

Local authorities can issue a Penalty Charge Notice (PCN) if you park incorrectly or for too long on public land.

Private companies are also allowed to issue parking tickets. Many call these Parking Charge Notices but they are not the same.

They are not backed up by law. Instead, they are invoices for a breach of contract.

For example, if you park in a private car park you agree to a contract that says you will pay a fee and leave after a certain time.

Police can only intervene in parking disputes between members of the public if a vehicle has caused an obstruction that is considered to be a hazard to other road users or pedestrians.

‘Not all of that time was my vehicle stationary and I can be seen leaving the vehicle with the engine running and passengers inside and promptly returning and leaving the area having decided not to park.

‘All of this is verified by the ‘evidence’ supplied by I Park Services Ltd and submitted to me by them.’

Jed has been working on having ‘a sensible dialogue’ with the company and its legal representatives since August 2021.

He said: ‘I have responded faithfully to every letter they have sent to me and also contacted them by telephone after each correspondence.

‘Both organisations have steadfastly refused to engage in any dialogue and are now, in my opinion, abusing legal process to try to bully me into paying a debt I simply do not owe.’

Mr Dalton aims to defend himself in court, while he looks into fighting for I Park Services to pay the thousands of pounds of fines he has been hit with.

He said: ‘The next step is me hoping that the court finally allows me to defend the claim and to overturn the CCJ against me. Right now, I have been referred to credit agencies and haven’t even had any opportunity to put my side of the story to a judge.’

Shocked Wadebridge resident, Jan Baker took to a ‘Love Wadebridge’ Facebook community page after being given a ticket from I Park Services in December, 2021 after pulling into the car park for just over four minutes to deliver an item.

She wrote: ‘[I] was shocked to receive a parking notice from I Park Services in Jubilee Road – just delivering an item for the Antiques Market ‘s Pony charity.

‘I was exactly 4.13 mins…I’m going to challenge this but wondered if anyone else has suffered similarly and has likewise challenged this?’

Lesley Price commented on Jan’s post, explaining that she had suffered the same fate. She wrote: ‘Yes had a ticket for driving in looking for a space and driving out after a few minutes’.