A Melbourne man has been charged with incitement following a prohibited gathering of anti-lockdown protesters in the city's north.

The 21-year-old was charged after a gathering in Roxburgh Park on Sunday. 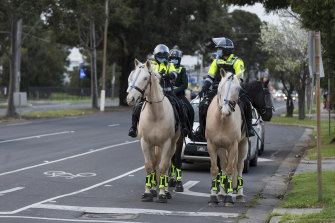 Another five people were issued with $1652 fines for breaching coronavirus restrictions and police said more infringements were expected to be issued in the next few days as investigations continue.

"Rest assured we are well prepared to provide a swift and firm response if these selfish people continue to blatantly breach the restrictions," a police spokeswoman said.

"We are urging these people for one moment to stop thinking about themselves and stop putting Victorians' lives at risk."

Those who have taken part in recent demonstrations, including in Dandenong, Roxburgh Park and Broadmeadows in the past week, have claimed they weren’t gathering to protest, but coincidentally happened to be out at the same time for their one hour of exercise.

A 76-year-old man from Windsor was arrested on Friday and charged with incitement for allegedly helping to organise a "Freedom Day" anti-lockdown protest planned for Saturday.

Many of the anti-lockdown protesters on Sunday were spotted wearing Guy Fawkes masks, with flares being held aloft by the rowdy group.

In one video, after being told to move on from the gathering, protesters yelled at police, "you are in groups, who is the real criminal?"

Victoria Police issued a total of 122 fines in the past 24 hours for breaching restrictions, including 11 to people failing to wear a face covering, 19 at vehicle checkpoints and 45 for curfew breaches.

Those fined included a man sitting at a bus stop at Glen Waverly train station after curfew, telling police he went shopping and then to a friend's place.

Premier Daniel Andrews on Monday expressed his disappointment with the protests,saying protesting at the moment was not appropriate.

"You know what disappoints me more than anything? The behaviour of some of those people takes away from the amazing work, absolutely amazing work the vast majority of Victorians are doing," he said.

He said there will always be some who do the wrong thing but urged Victorians not to take part in protests.

"No matter what your postcode or purpose, protest is not safe, it's not smart, it's just not right because it potentially puts at risk everything that people have worked so hard to achieve."

The most important news, analysis and insights delivered to your inbox at the start and end of each day. Sign up here.