Police have charged a man with two counts of attempted murder after two men were injured during a violent rampage at a Mornington Peninsula shopping centre.

A 48-year-old man of no fixed address has been charged by police following the incident at Rosebud Plaza on Boneo Road just after 10am Saturday. 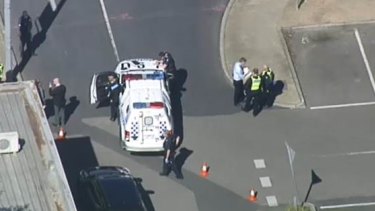 Police at the scene of the violent attack at Rosebud Plaza.Credit:Nine News

Police allege the man was "armed with a tomahawk outside a shopping centre" and attacked two men, according to a Victoria Police spokeswoman.

The injured men – a 47-year-old and a 63-year-old – are both in a stable condition at the Alfred Hospital after receiving upper body injuries.

The 48-year-old is scheduled to appear at the Melbourne Magistrates Court on Monday.

Anyone who witnessed the incident or with information is urged to contact Crime Stoppers on 1800 333 000 or file a confidential report at www.crimestoppersvic.com.au.