Kuala Lumpur: Mahathir Muhamad has claimed an extraordinary victory in Malaysia's 14th general election, opening the door to the first change of government in the 61 years since the country's independence.

Official results from the Malaysian electoral commission suggested at 2.30am (AEDT) that Mahathir's opponent Pakatan Harapan from the Alliance of Hope and its allied parties had so far won 48 seats, while the Prime Minister Najib Razak's governing Barisan Nasional (National Coalition) and its allies had won 46 seats. 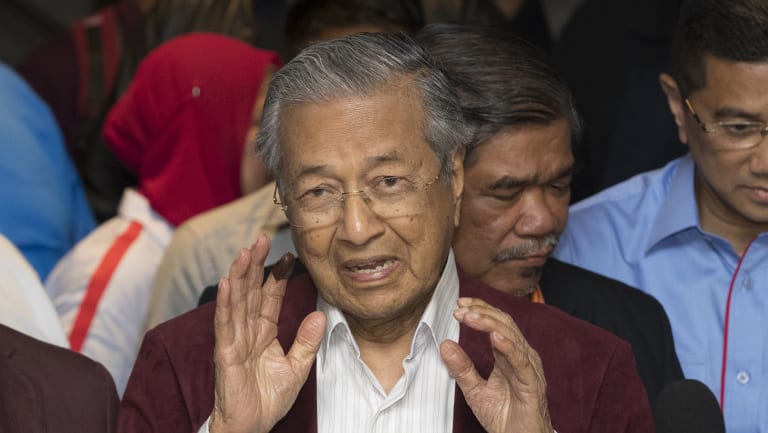 In chaotic scenes, Mahathir Muhamad told reporters that he believed his opposition alliance had won the election.

A majority government requires 112 seats in the 222-member Parliament.

An hour earlier, the 92-year-old Mahathir, who served as prime minister for 22 years until 2003, told media gathered at Kuala Lumpur's Sheraton Hotel that, based on unofficial counting, "it would seem that we have practically achieved that figure [112] and the figure for the Barisan Nasional is very much lower than that".

"We believe that from our official counting that they're left far behind. The likelihood is that they will not be forming the government. There is no way they can catch up," he said, adding that the opposition was also on track for victory in five state elections.

It was unclear whether the Prime Minister was going to speak on Thursday morning. 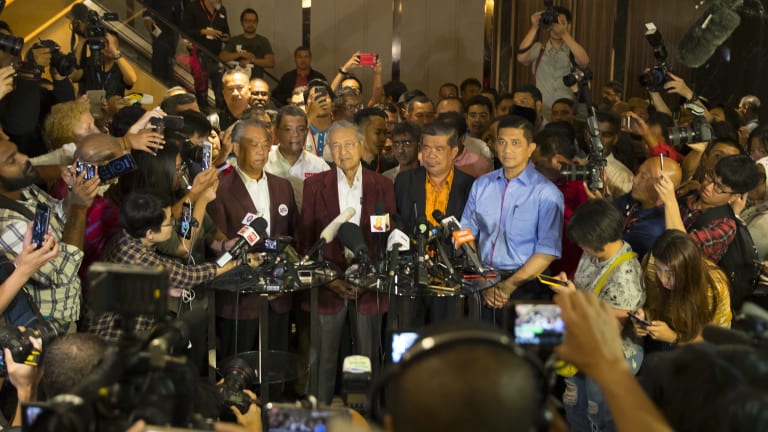 At a late-night conference, Mahathir told reporters it looked like Malaysia would have its first change in government in 61 years.

The result, if upheld, would represent the most dramatic shakeup of Malaysia's political system in the nation's history.

"Mahathir knows how power works in Malaysia. He’s already out there pushing the buttons of power with his warning to the police. He’s fencing in Najib and marking out his territory already," he said.

"What happens now? There will be brinksmanship and a stand-off. The cost for Najib to concede is huge. He would lose immunity as head of state [over the 1MDB scandal] and could face prosecution.

"If people’s frustration boils over, that could give Najib an excuse for a crack down."

By about 3am (AEST), unofficial counting by the Malaysiankini website suggested the opposition had won 90 seats and the government held 75.

But in a sign that the opposition anticipated trouble, and a hold up in the country's first ever transfer of power, Mahathir warned Najib he must not stand in the way of the election result being confirmed.

Asked about speculation the Prime Minister had convened a meeting of Malaysia's security council, Mahathir said: "I heard there was some meeting, but I don't know who was at it". 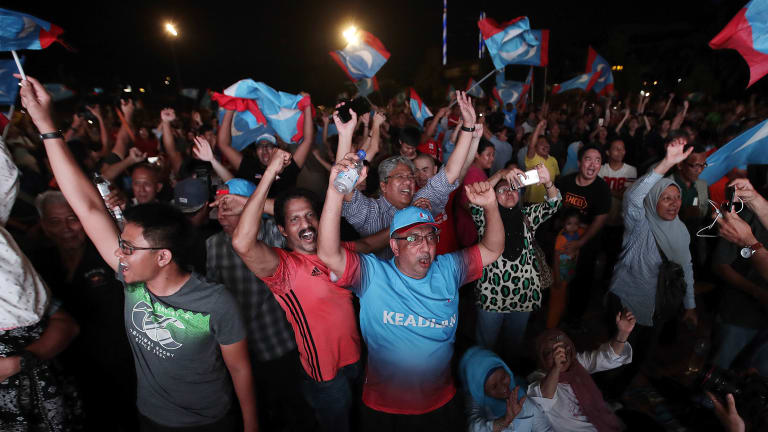 Mahathir then accused the Electoral Commission, which is seen as allied to the ruling party, of delaying its sign off on official results.

"The results have not come out. It has actually stopped… this is very serious, the time is very late now, it should be coming out now [the results], by now always we would know always who is winning and who is losing."

Ahead of the election, Mahathir had predicted a "Malay tsunami" would sweep Najib, a man he once mentored, from power and make history, though most analysts believed Pakatan Harapan would fall just short.

Mahathir shocked Malaysians by coming out of retirement and teaming up with Anwar Ibrahim, who served as his deputy prime minister in the 1990s, before the pair fell out spectacularly and Anwar was jailed on trumped-up sodomy charges.

He has promised to stand aside for Anwar, who is serving the final days of a second stint in prison, to become Prime Minister.

Polling from the respected Merdeka Centre indicates that, at best, the result was too close to call on Thursday morning.

Before the poll was called, a dodgy electoral re-distribution was implemented to worsen already-gerrymandered electorates and new "fake news" laws were passed which critics said would shut down discussion of Najib's involvement in the 1MDB sovereign wealth fund scandal.

Overseas Malaysians, including many from the 160,000-strong diaspora in Australia, flooded back to the country of their birth to vote.

Facebook groups were set up to coordinate the hand-delivery of precious postal votes by returning expats who may otherwise not have made it back in time.

Nearly 14.5 million Malaysians were eligible to vote in the election and the turn out was about 75 per cent, down from the 2013 election.