Paris: Emmanuel Macron unveiled plans to ramp up the fight against "Islamist separatism" which he said is threatening to build a "parallel society" rejecting the rules of France.

In a long-awaited speech delayed by the pandemic, the French president on Friday, local time, described Islam as "a religion in crisis all over the world today that is corrupted by radical forms".

He said the Muslim community must free itself from "foreign influences" to become an "Islam of enlightenment" in the country of Voltaire and Diderot. 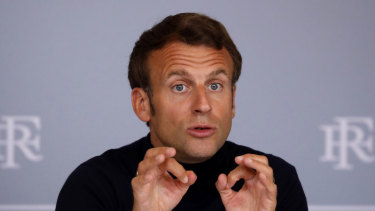 France is home to an estimated five million Muslims, making Islam its second religion. Under a 1905 law, the country follows a strict form of secularism, known as laïcité, which is designed to separate church and state.

"Secularism is not the problem," he said during a visit to the deprived Paris suburb of Les Mureaux.

Secularism guarantees Muslims and other believers the freedom to practise their faith in peace and remain "fully part of the Republic", Macron said. 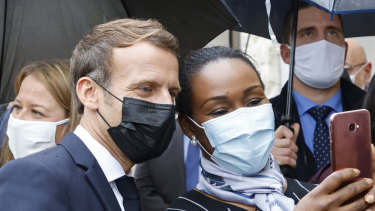 French President Emmanuel Macron poses for a selfie with residents during his visit to Les Mureaux, northwest of Paris.Credit:AP

"The problem is an ideology which claims its own laws should be superior to those of the Republic."

The fault partly lies with France, he added, which stands guilty of fostering the "ghettoisation" of ethnic minorities and the poor that created the conditions for radical Islam to thrive where the state had failed. To tackle its "insidious" spread, he outlined a five-point plan that would be translated into a bill debated in parliament in January.

Measures include making school education compulsory for all children over the age of three in order to avoid "indoctrination" by extremists in madrassas.

Banning home schooling, except on medical grounds, he said the role of teachers was to "train citizens, not believers".

The 42-year-old confirmed France will phase out the tradition of countries such as Turkey and Algeria sending imams to preach in its mosques.

Speaking just days after an Islamist stabbed two people in Paris outside the former offices of Charlie Hebdo, a magazine, he said: "The country has been hit by Islamic terrorism since 2012 and we have progressively rearmed against this threat."

"We have created our own separatism in some of our areas. We cannot keep adding poverty to poverty," he said.