It has been described as ‘soulless’, ‘disappointing’ and in dire need of a facelift.

Now Hartshead Moor East motorway services on the M62 has been dubbed the worst in Britain by weary motorists.

The Welcome Break-run site near Huddersfield, the UK’s highest motorway service station, received a rating of 80 per cent in a customer satisfaction survey.

Hartshead Moor’s westbound site was given a rating of 87 per cent. By contrast, Rugby services on the M6 in Warwickshire was ranked the best in the survey of 31,000 visitors at 119 motorway stop-offs.

The Moto-owned site was the only one to clinch a satisfaction rating of 100 per cent. 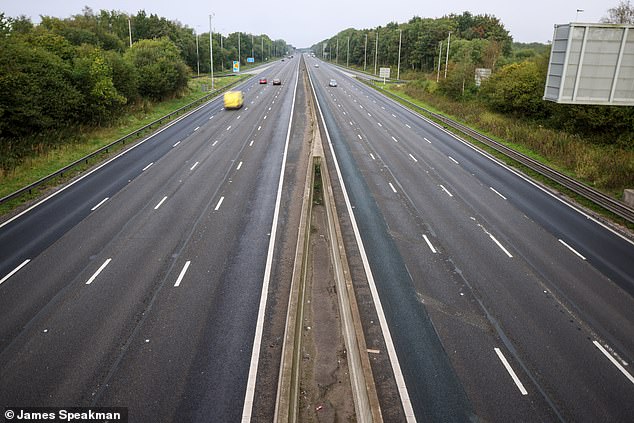 The M62 has been described as ‘soulless’, ‘disappointing’ and in dire need of a facelift

Independent watchdog Transport Focus, which carried out the survey, gauged the views of customers on everything from toilets and staff to the value for money of food and drink and the provision of charging points for electric vehicles.

Overall, 93 per cent were happy with their visits to service stations, with 88 per cent happy with the toilets. But just 63 per cent described the value for money of the food and drink as fairly or very good.

Transport Focus chief executive Anthony Smith said: ‘Services continue to do a good job of their most important safety function – allowing drivers to rest and relax.’

In an online review of Hartshead Moor, one customer wrote: ‘Soulless motorway service area with expensive food outlets and a poor shop. Avoid like the plague.’

A spokesman for Welcome Break said it was ‘very disappointed’ and would be ‘prioritising’ the site for investment.

Edmund King, president of the AA motoring group, said: ‘In terms of road safety, it is essential that drivers take a break at least every two-and-a-half hours, so it is vital that attractive service areas with all the facilities encourage drivers to stop.’