Also known as “involuntary celibates”, the twisted group is made of mostly teenage men who claim they cannot form romantic relationships – and has hit the headlines following the purportedly incel-linked van rampage in Canada. 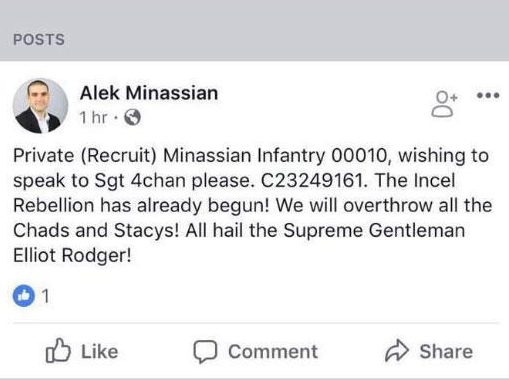 In a chilling Facebook post,  Alek Minassian – who man accused of killing 10 people in the Toronto van rampage last week – said an “Incel Rebellion has begun.”

He also praised Elliot Rodger, the so-called 'virgin killer' who murdered seven people in 2014 before taking his own life.

Rodger's spree killing was designed to 'punish' women he felt had sexually rejected him, as well as the sexually active young men he envied.

The mentally ill killer has since become something of a poster boy for 'incels', who refer to him as ER in posts praising him.

As well as hero-worshipping Rodger, some of these warped young men blame women for rejecting them in favour of “genetically superior” males they call “Chads.”

Speaking exclusively with The Sun Online, one of the 'incel' community’s most prominent members admitted that a “vocal minority” are now celebrating the Toronto van attack that left eight women and two men dead.

Jack Peterson, who works as a moderator on an 'incel' discussion forum and also has a podcast about the community, claims talk of violence or discussing illegal activity is “100% against the rules” of his website.

Yet some members of the forum are openly calling for more attacks.